The Rotunda (University of Virginia)

The Rotunda (University of Virginia) 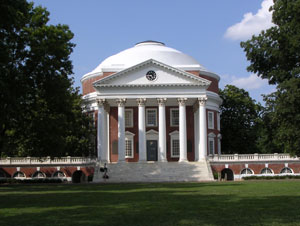 The Rotunda is a building located on the grounds of the . It was designed by to represent the "authority of nature and power of reason" and was inspired by the Pantheon in . Construction began in 1822 and was completed in 1826, after his death. The grounds of the new university were unique in that they surrounded a housed in the Rotunda rather than a church, as was common at other universities in the English-speaking world. The Rotunda is seen as a lasting symbol of Jefferson's belief in the separation of church and education, as well as his lifelong dedication to both education and architecture.

The Marquis de Lafayette and dined with Thomas Jefferson in the Dome Room of the unfinished Rotunda at the University's inaugural banquet, and Lafayette toasted Jefferson as the "Father of the University of Virginia". This brought Jefferson to tears, and he later had the phrase inscribed on his grave. A bust of Lafayette was given to the University in 1904 by the Government of to honor the friendship between the two men. Today it stands in the North Oval Room.

The University being the first at which students could specialize in the field of , Jefferson toyed with the idea of painting the interior of the Dome Room with images of the night sky to aid the students in their learning. He went so far as to begin designing a new mechanism with which students would be able to "float" through the air and study heavenly bodies from closer different viewpoints. They would also be equipped with a control to move the stars around the . The idea was eventually abandoned but would have been the first in the United States. The of 1882 was observed from the steps of the Rotunda, in a coordinated effort with .

A structure called the Annex, also known as "New Hall," was added to the north side of the Rotunda in 1853 to provide additional classroom space needed due to overcrowding.

In 1895, the Rotunda famously burnt to the ground.

Today, graduate students defend their theses in the north oval room and many events are hosted on the steps of the Rotunda. It is also the traditional starting point for students the Lawn.

Both Dallas Hall at (SMU) and Grawemeyer Hall at the were modeled after Jefferson's Rotunda.