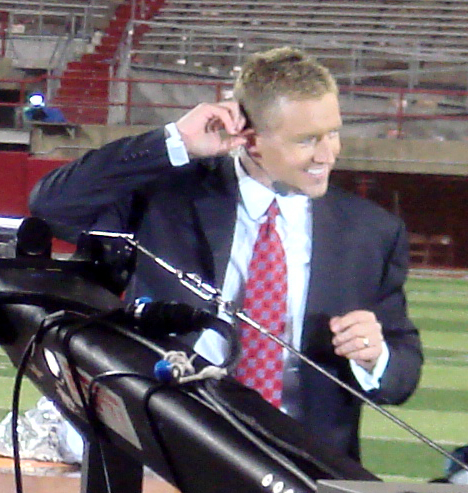 Kirk Herbstreit (born , Centerville, Ohio) is an analyst for 's "College GameDay", a television program covering and a provider of during college football games on ESPN and ABC. He appears annually as a commentator in ' "NCAA Football".

Kirk was a four-year letter winner as a at from 1989&ndash;1993. He graduated from Centerville High School in Centerville, Ohio, a suburb of Dayton. He was the Ohio Player of the Year as a senior for Centerville, as well as a standout table tennis player.

Herbstreit was the first player to commit to the after the hiring of John Cooper as in 1988. After waiting his turn as a Buckeye starter behind and , Herbstreit finally led the team as a senior in 1992. That year he was a co-captain (along with ) and was voted team MVP. Herbstreit passed for 1,904 yards that season, including four 200+ yard games, before losing to the in the Florida Citrus Bowl. As a college quarterback, Herbstreit had held the Ohio State record for pass completions in the rivalry game against Michigan. He completed 28 passes in a 1992 tie game. His 271-yard game against arch-rival , to earn a 13&ndash;13 tie, is believed to have saved Coach Cooper's job.fact|date=August 2008

Herbstreit's father, Jim Herbstreit, had been a co-captain (along with ) of the 1960 Ohio State team, and was later an assistant coach at Ohio State under . When Kirk Herbstreit was named co-captain in 1992, the two became only the second father-and-son duo to have each been Ohio State captains. (James and were the first in 1989; Pepper and became the third in 2007.)

Kirk Herbstreit graduated from Ohio State in 1993 with a degree in .

and sit alongside Herbstreit on the ESPN "College GameDay" set, discussing the day's college football games, and analyzing highlights and players. "College GameDay" frequently makes Saturday road trips to various colleges around the to preview the school's upcoming football game. He was nominated for a 1997 Sports Emmy Award as television’s top studio analyst, along with (eventual winner), , and Steve Lyons. He is a frequent contributor to ESPN.com and "". In 1997, he wrote a weekly in-season column&mdash;"Inside The Game With Kirk Herbstreit"&mdash;for "". Herbstreit previously worked Thursday night games for ESPN as a color commentator, and he is currently in the booth for Saturday night college football games on ABC.

On December 1, 2007, Herbstreit reported that LSU coach Les Miles was to be the next head coach for the University of Michigan. His report reached the LSU team during their pregame preparations for the 2007 SEC Conference Championship game and forced Miles to call an emergency press conference to deny the report, which ultimately proved incorrect. Chastened by the Miles episode, Herbstreit later declared "you will never see me gathering news and reporting information ever again."

Herbstreit is also a contributor to the based AM radio station 1460 The Fan; 1460 is also an affiliate and a weekly contibutor to the WFNZ radio program Primetime with the Packman during the college football season hosted by long-time sports broadcaster Billy Packer's son, Mark Packer. When not on assignment for ESPN, Herbstreit is a co-host of the 4&ndash;7 p.m. show called "The Big Show", along with . Also in July 2007, he served as a panelist for the series "" alongside and .

Herbstreit is also a regular co-host on ESPN Radio's "" that airs from 1 p.m. through 3 p.m. (Eastern Standard Time) on weekdays.

Allison Butler (former Ohio State cheerleader) and Herbstreit were married in June 1998. They have identical twin sons, Jake and Tye, born , a 4-year-old boy, Zak (12/9/2003), and another son, Chase (August 2006). All of Herbstreit's children appeared on College GameDay with their father in full Buckeye dress as Herbstreit picked Ohio State to beat on September 23rd, 2006. Herbstreit lives with his family in , , a suburb of Columbus. On Colin Cowherd's radio show, it was noted that Herbstreit is an avid fan.