/ˈdruːpəl/) is a free and open-source content management system (CMS) and content management framework (CMF) written in PHP and distributed under the GNU General Public License.[2][3][4] It is used as a back-end system for at least 1.5% of all websites worldwide[5][6] ranging from personal blogs to corporate, political, and government sites including whitehouse.gov and data.gov.uk.[7] It is also used for knowledge management and business collaboration.

The standard release of Drupal, known as Drupal core, contains basic features common to content management systems. These include user account registration and maintenance, menu management, RSS-feeds, page layout customization, and system administration. The Drupal core installation can be used as a brochureware website, a single- or multi-user blog, an Internet forum, or a community website providing for user-generated content.

As of August 2011[update] there are more than 11,000 free community-contributed addons, known as contrib modules, available to alter and extend Drupal's core capabilities and add new features or customize Drupal's behavior and appearance. Because of this plug-in extensibility and modular design, Drupal is sometimes described as a content management framework.[3][8] Drupal is also described as a web application framework, as it meets the generally accepted feature requirements for such frameworks.

Although Drupal offers a sophisticated programming interface for developers, no programming skills are required for basic website installation and administration.[9]

Drupal runs on any computing platform that supports both a web server capable of running PHP (including Apache, IIS, lighttpd, and nginx) and a database (such as MySQL, MariaDB, PostgreSQL, SQLite, MongoDB or Microsoft SQL Server) to store content and settings. Drupal 6 requires PHP 4.4.0+ while Drupal 7 requires PHP 5.2 or higher.[4]

Originally written by Dries Buytaert as a message board, Drupal became an open source project in 2001.[14] Drupal is an English rendering of the Dutch word “druppel”, which means “drop” (as in “a water droplet”).[15] The name was taken from the now-defunct Drop.org website, whose code slowly evolved into Drupal. Buytaert wanted to call the site “dorp” (Dutch for “village”) for its community aspects, but mistyped it when checking the domain name and thought the error sounded better.[14]

A community now helps develop Drupal,[16] and Drupal's popularity is growing rapidly. From May 2007 to April 2008, Drupal was downloaded from the Drupal.org website more than 1.4 million times, an increase of approximately 125% from the previous year.[17][18]

Drupal 7.0 was released on January 5, 2011, with release parties in multiple countries.[26] As of the release of version 7, maintenance for Drupal 5 has been discontinued, and only Drupal 7 and Drupal 6 are being actively maintained.[27]

Drupal 8 is in development and a release has not yet been set as of November 2011[update].[29] The Google Summer of Code is sponsoring 20 Drupal projects.[30]

Drupal core is the stock element of Drupal. In its default configuration, a Drupal website's content can be contributed by either registered or anonymous users (at the discretion of the administrator) and is made accessible to web visitors by a variety of selectable criteria. Drupal core also includes a hierarchical taxonomy system, which allows content to be categorized or tagged with key words for easier access.[9]

Drupal Core includes optional modules which can be enabled by the administrator to extend the functionality of the core website.[31]

The core Drupal distribution provides a number of features, including:[31] 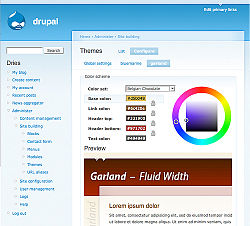 The color editor being used to adjust the "Garland" core theme

The Color Module, introduced in Drupal core 5.0, allows administrators to change the color scheme of certain themes via a browser interface.[34]

By February 2008, Drupal had been made available in 55 languages and English (the default).[35] Support is included for right-to-left languages such as Arabic, Persian and Hebrew.[36]

Drupal can automatically notify the administrator when a new version of any module, theme, or the Drupal core itself becomes available. This feature can help keep a Drupal installation up-to-date with the latest features and security fixes.[36]

Prior to version 7, Drupal has had functions to assist with accessing database tables. These functions can perform tasks such as SQL query cleansing, multi-site table name prefixing, and helpers for generating proper SQL queries for the database. In addition, Drupal 6 introduced an abstraction layer that allowed programmers to create SQL queries without writing SQL.

Drupal version 7 extends the data abstraction layer such that a programmer no longer needs to write SQL queries as text strings. In addition, Drupal 7 makes use of the PHP Data Objects classes to abstract the physical database from module code. Microsoft has written a database driver for SQL Server.[37]

With Drupal 7's new database abstraction layer and the ability for Drupal to run on IIS, it is now easier for Windows developers to participate in the Drupal community. A group on Drupal.org is dedicated to these issues.[38]

Drupal core is modular, defining a system of hooks and callbacks, which are accessed internally via an API.[39] This design allows third-party contributed (often abbreviated to "contrib") modules and themes to extend or override Drupal's default behaviors without changing Drupal core's code.

Drupal isolates core files from contributed modules and themes. This increases flexibility and security and allows administrators to cleanly upgrade to new releases without overwriting their site's customizations.[40] To maintain this separation, Drupal does not support altering Drupal core's software.[41]

Some of the most commonly used contrib modules include:[44]

Drupal themes use standardized formats that may be generated by common third-party theme design engines. Many are written in the PHPTemplate engine[46] or, to a lesser extent, the XTemplate engine.[47] Some templates use hard-coded PHP.

The inclusion of the PHPTemplate and XTemplate engines in Drupal addressed user concerns about flexibility and complexity.[48] The Drupal theming system utilizes a template engine to further separate HTML/CSS from PHP. A popular Drupal contributed module called 'Devel' provides GUI information to developers and themers about the page build.

Community-contributed themes[49] at the Drupal website are released under a free GPL license,[50] and most of them are demonstrated at the Drupal Theme Garden.[51]

In the past, those wanting a fully customized installation of Drupal had to download a pre-tailored version separately from the official Drupal core. Today, however, a distribution defines a packaged version of Drupal that upon installation, provides a website or application built for a specific purpose.

The distributions offer the benefit of a new Drupal site without having to manually seek out and install third-party contrib modules or adjust configuration settings. They are collections of modules, themes, and associated configuration settings that prepare Drupal for custom operation. For example, a distribution could configure Drupal as a "brochureware" site rather than a "news" site or an "online store".

Drupal.org has a large community of users and developers, numbering more than 648,000 user accounts and more than 10,000 developer accounts.[43] The semiannual Drupal conference alternates between North America and Europe.[61] Attendance at DrupalCon grew from 500 at Szeged in August 2008 to over 3,000 people at Chicago in March 2011.[62] The European DrupalCon 2011 will take place in August 2011 in London, UK.

Smaller events, known as "Drupal Camps", occur throughout the year all over the world.

There are a number of active Drupal forums,[63] mailing lists[64] and discussion groups.[65] Drupal also maintains several IRC channels[66] on the Freenode network.

There are over 30 national communities[67] around drupal.org offering language-specific support.

Paired with each DrupalCon event, "Drupalgangers" meetups occur. The events are defined by the community as gatherings of "friends, partners, spouses, and other associates of Drupal community members to enjoy the "con" - without ever having to participate in the geekdom of the event - by traveling around the town or city together."[69]

Drupal's policy is to announce the nature of each security vulnerability once the fix is released.[70]

Administrators of Drupal sites are automatically notified of these new releases via the Update Status module (Drupal 6.x) or via the Update Manager (Drupal 7.x).[71] Drupal maintains a security announcement mailing list, a history of all security advisories,[72] a security team home page,[73] and an RSS feed[74] with the most recent security advisories. In 2008, eleven security vulnerabilities were reported and fixed in the Drupal core.[72] Security holes were also found and fixed in 64 of the 2243 user-contributed modules.[72][75]

When compared to three other well-known open source CMS platforms covered by the MITRE CVE database, Drupal ranked second - after Plone but before WordPress and Joomla.[76]

In a controversial[77] article about the adoption of Drupal by the Whitehouse.gov site, associate editor at Slate Chris Wilson[78] lists some common criticisms of Drupal. Penn State University also outlined a number of criticisms (alongside a number of benefits) of Drupal for their environment.[79] Other criticisms have included:

These are examples of websites based on the Drupal CMS: