/ˈdʒæŋɡoʊ/ jang-goh)[1] is an open source web application framework, written in Python, which follows the model-view-controller architectural pattern.[2] It was originally developed to manage several news-oriented sites for The World Company[3] of Lawrence, Kansas, and was released publicly under a BSD license in July 2005; the framework was named after guitarist Django Reinhardt.[4] In June 2008 it was announced that a newly formed Django Software Foundation will take care of Django in the future.[5]

Django's primary goal is to ease the creation of complex, database-driven websites. Django emphasizes reusability and "pluggability" of components, rapid development, and the principle of DRY (Don't Repeat Yourself). Python is used throughout, even for settings, files, and data models. 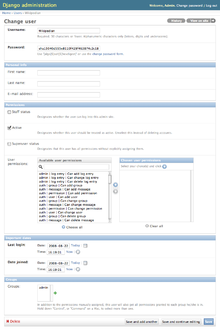 Screenshot of the Django admin interface for modifying a user.

The core Django MVC framework consists of an object-relational mapper which mediates between data models (defined as Python classes) and a relational database ("Model"); a system for processing requests with a web templating system ("View") and a regular-expression-based URL dispatcher ("Controller").

Also included in the core framework are:

The main Django distribution also bundles a number of applications in its "contrib" package, including:

Django can be run in conjunction with Apache using mod_wsgi or mod_python. Django also includes the ability to launch a FastCGI server, enabling use behind any web server which supports FastCGI. Another deployment option is nginx and uwsgi. It should also be possible to use other WSGI-compliant web servers. Django officially supports four database backends: PostgreSQL, MySQL, SQLite and Oracle. MS SQL backend can be used with django-mssql but only in Microsoft operating systems, similarly external backends exist for IBM DB2 , SQL Anywhere and Firebird. There is a fork named django-nonrel which supports NoSQL databases like MongoDB and Google App Engine's Datastore.

Django may also be run in conjunction with Jython on any Java EE application server such as GlassFish or JBoss. In this case django-jython must be installed in order to provide JDBC drivers for database connectivity, which also provides functionality to compile Django in to a .war suitable for deployment.

Versions of Django prior to 1.0 had multithreading issues [13] and it would be recommended that those versions of Django only be used in a single threaded server configuration, such as with Apache prefork MPM using mod_python or embedded mode of mod_wsgi. Although Django 1.0 is principally believed to now be thread safe, some minor threading issues are still occasionally being found; it may be prudent to continue to use a single threaded server configuration and/or stay current with Django releases and notices about the multithreading issues. [13]

Google App Engine includes Django 0.96.1[14] as one of the bundled frameworks.

While a number of Django developers use text editors such as VIM, Emacs or TextMate with Django Bundle for their projects, the other prefer more specialized tools providing intellisense, code completion, debugging, refactoring, unit testing, etc.[15]

There is a twice-yearly conference for Django developers and users, named "DjangoCon", that has been held since September 2008. One DjangoCon a year is held in Europe, in May or June;[17] while the other is held in the United States in September, usually in Portland, Oregon.[18].