/maɪ ˌɛskjuːˈɛl/ "My S-Q-L",[1] officially, but also commonly /maɪ ˈsiːkwəl/ "My Sequel") is a relational database management system (RDBMS)[2] that runs as a server providing multi-user access to a number of databases. It is named after developer Michael Widenius' daughter, My.[3] The SQL phrase stands for Structured Query Language.[4]

The MySQL development project has made its source code available under the terms of the GNU General Public License, as well as under a variety of proprietary agreements. MySQL was owned and sponsored by a single for-profit firm, the Swedish company MySQL AB, now owned by Oracle Corporation.[5]

Free-software-open source projects that require a full-featured database management system often use MySQL. For commercial use, several paid editions are available, and offer additional functionality. Applications which use MySQL databases include: TYPO3, Joomla, WordPress, MyBB, phpBB, Drupal and other software built on the LAMP software stack. MySQL is also used in many high-profile, large-scale World Wide Web products, including Wikipedia, Google[6] (though not for searches), Facebook,[7] and Twitter.[8]

MySQL is a popular choice of database for use in web applications, and is a central component of the widely used LAMP web application software stack—LAMP is an acronym for "Linux, Apache, MySQL, Perl/PHP/Python".

Many programming languages with language-specific APIs include libraries for accessing MySQL databases. These include MySQL Connector/Net for integration with Microsoft's Visual Studio (languages such as C# and VB are most commonly used) and the JDBC driver for Java. In addition, an ODBC interface called MyODBC allows additional programming languages that support the ODBC interface to communicate with a MySQL database, such as ASP or ColdFusion. The HTSQL - URL based query method also ships with a MySQL adapter, allowing direct interaction between a MySQL database and any web client via structured URLs. The MySQL server and official libraries are mostly implemented in ANSI C/ANSI C++. 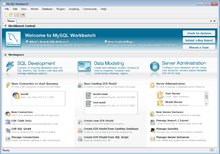 MySQL is primarily an RDBMS and therefore ships with no GUI tools to administer MySQL databases or manage data contained within. Users may use the included command-line tools,[19] or download MySQL frontends from various parties that have developed desktop software and web applications to manage MySQL databases, build database structure, and work with data records.

Third-party proprietary and free graphical administration applications (or "front ends") are available that integrate with MySQL and enable users to work with database structure and data visually. Some well-known front ends, in alphabetical order, are:

MySQL can be built and installed manually from source code, but this can be tedious so it is more commonly installed from a binary package unless special customizations are required. On most Linux distributions the package management system can download and install MySQL with minimal effort, though further configuration is often required to adjust security and optimization settings.

Though MySQL began as a low-end alternative to more powerful proprietary databases, it has gradually evolved to support higher-scale needs as well. It is still most commonly used in small to medium scale single-server deployments, either as a component in a LAMP based web application or as a standalone database server. Much of MySQL's appeal originates in its relative simplicity and ease of use, which is enabled by an ecosystem of open source tools such as phpMyAdmin. In the medium range, MySQL can be scaled by deploying it on more powerful hardware, such as a multi-processor server with gigabytes of memory.

There are however limits to how far performance can scale on a single server, so on larger scales, multi-server MySQL deployments are required to provide improved performance and reliability. A typical high-end configuration can include a powerful master database which handles data write operations and is replicated to multiple slaves that handle all read operations.[22] The master server synchronizes continually with its slaves so in the event of failure a slave can be promoted to become the new master, minimizing downtime. Further improvements in performance can be achieved by caching the results from database queries in memory using memcached, or breaking down a database into smaller chunks called shards which can be spread across a number of distributed server clusters.[23]

As of April 2009[update], MySQL offered MySQL 5.1 in two different variants: the open source MySQL Community Server and the commercial Enterprise Server. MySQL 5.5 is offered under the same licences.[24] They have a common code base and include the following features:

The developers release monthly versions of the MySQL Server. The sources can be obtained from MySQL's web site or from MySQL's Bazaar repository, both under the GPL license.

MySQL implements the following features, which some other RDBMS systems may not:

MySQL does not currently comply with the SQL standard for some of the implemented functionality, including issues like silent ignore of standard SQL syntax.[28] Triggers are currently limited to one per action / timing, i.e. maximum one after insert and one before insert on the same table.[29] There are no triggers on views.[29]

Milestones in MySQL development include:

Version 5.1 contained 20 known crashing and wrong result bugs in addition to the 35 present in version 5.0 (almost all fixed as of release 5.1.51).[33]
MySQL 5.1 and 6.0 showed poor performance when used for data warehousing — partly due to its inability to utilize multiple CPU cores for processing a single query.[34]

MySQL Server 6.0.11-alpha was announced 22 May 2009 as the last release of the 6.0 line. Future MySQL Server development uses a New Release Model. Features developed for 6.0 are being incorporated into future releases.

MySQL 5.6, a development milestone release, was announced at the MySQL users conference 2011. New features include performance improvements to the query optimizer, higher transactional throughput in InnoDB, new NoSQL-style memcached APIs, improvements to partitioning for querying and managing very large tables, improvements to replication and better performance monitoring by expanding the data available through the PERFORMANCE_SCHEMA.[38] In July further previews with a BINLOG API, group commit, and InnoDB full text searching were released.

MySQL offers support via their MySQL Enterprise product, including a support service. The support communicates with the developers as necessary to handle problems. In addition, it hosts forums and mailing lists, employees and other users are often available in several IRC channels providing assistance.

Buyers of MySQL Enterprise have access to binaries and software certified for their particular operating system, and access to monthly binary updates with the latest bug-fixes. Several levels of Enterprise membership are available, with varying response times and features ranging from how to and emergency support through server performance tuning and system architecture advice. The MySQL Network Monitoring and Advisory Service monitoring tool for database servers is available only to MySQL Enterprise customers.

Potential users can install MySQL Server as free software under the GNU General Public License (GPL), and the MySQL Enterprise subscriptions include a GPL version of the server, with a traditional proprietary version available on request at no additional cost for cases where the intended use is incompatible with the GPL.[39]

Both the MySQL server software itself and the client libraries use dual-licensing distribution. Users may choose the GPL,[40] which MySQL has extended with a FLOSS License Exception. It allows Software licensed under other OSI-compliant open source licenses, which are not compatible to the GPL, to link against the MySQL client libraries.[41]

Customers that do not wish to follow the terms of the GPL may purchase a proprietary license.[42]

Like many open-source programs, MySQL has trademarked its name, which others may use only with the trademark holder's permission.[43]

In October 2005, Oracle Corporation acquired Innobase OY, the Finnish company that developed the third-party InnoDB storage engine that allows MySQL to provide such functionality as transactions and foreign keys. After the acquisition, an Oracle press release mentioned that the contracts that make the company's software available to MySQL AB would be due for renewal (and presumably renegotiation) some time in 2006.[44] During the MySQL Users Conference in April 2006, MySQL issued a press release that confirmed that MySQL and Innobase OY agreed to a "multi-year" extension of their licensing agreement.[45]

In February 2006, Oracle Corporation acquired Sleepycat Software,[46] makers of the Berkeley DB, a database engine providing the basis for another MySQL storage engine. This had little effect, as Berkeley DB was not widely used, and was deprecated (due to lack of use) in MySQL 5.1.12, a pre-GA release of MySQL 5.1 released in October 2006.[47]

In April 2009, Oracle Corporation entered into an agreement to purchase Sun Microsystems,[49] then owners of MySQL copyright and trademark. Sun's board of directors unanimously approved the deal, it was also approved by Sun's shareholders, and by the U.S. government on August 20, 2009.[50] On December 14, 2009, Oracle pledged to continue to enhance MySQL[51] as it had done for the previous four years.

A movement against Oracle's acquisition of MySQL, to "Save MySQL"[52] from Oracle was started by one of the MySQL founders, Monty Widenius. The petition of 50,000+ developers and users called upon the European Commission to block approval of the acquisition. At the same time, several Free Software opinion leaders (including Eben Moglen, Pamela Jones of Groklaw, Jan Wildeboer and Carlo Piana, who also acted as co-counsel in the merger regulation procedure) advocated for the unconditional approval of the merger.[citation needed] As part of the negotiations with the European Commission, Oracle committed that MySQL server will continue to use the dual-licensing strategy long used by MySQL AB with commercial and GPL versions available until at least 2015. The antitrust of the EU had been "pressuring it to divest MySQL as a condition for approval of the merger." But, as revealed by Wikileaks, the US Department of Justice and Antitrust, at the request of Oracle, pressured the EU to unconditionally approve the merger.[53] The Oracle acquisition was eventually unconditionally approved by the European Commission on January 21, 2010.[54]

Meanwhile, Monty Widenius has released a GPL only fork, MariaDB. MariaDB is based on the same code base as MySQL server and strives to maintain compatibility with Oracle provided versions.[55]