Tea (meal)
This article is about meals referred to as "tea". For the beverage, see tea.

Tea can refer to any of several different meals or mealtimes, depending on a country's customs and its history of drinking tea. However, in those countries where the term's use is common, the influences are generally those of the former British Empire (now the Commonwealth of Nations). The tea meal can be small or large and used, for example in the phrase, "to take tea".

Elevenses is a snack that is similar to afternoon tea, but eaten in the morning.[1] It is generally less savoury than brunch, and might consist of some cake or biscuits with a cup of coffee or tea. 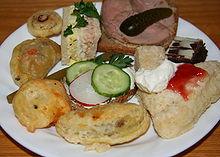 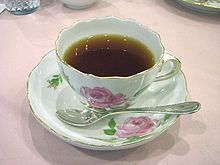 A cup of tea 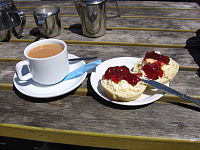 Cornish cream tea in Boscastle, although prepared in the Devonshire Method

Afternoon tea, is a small meal snack typically eaten between 2pm and 5pm. The custom of afternoon tea originated in England in the 1840s.[2] At the time, the various classes in England had a divergence in their eating habits. The upper classes typically ate luncheon at about midday and dinner (if not eschewed in favor of the later supper) at 8:00 pm or later, while the lower classes ate dinner at about 11:00 am and then a light supper at around 7:00 pm.[3] For both groups, afternoon tea filled a gap in the meals. The custom spread throughout the British Empire and beyond in succeeding decades. However, changes in social customs and working hours mean that most 21st Century Britons will rarely take afternoon tea, if at all.[citation needed]

Traditionally, loose tea is brewed in a teapot and served with milk and sugar. The sugar and caffeine of the concoction provided fortification against afternoon doldrums for the working poor of 19th and early 20th century England who had a significantly lower calorie count and more physically demanding occupation than most westerners today. For laborers, the tea was sometimes accompanied by a small sandwich or baked good (such as scones) that had been packed for them in the morning. For the more privileged, afternoon tea was accompanied by luxury ingredient sandwiches (customarily cucumber, egg and cress, fish paste, ham, and smoked salmon), scones (with clotted cream and jam, see cream tea) and usually cakes and pastries (such as Battenberg, fruit cake or Victoria sponge). In hotels and tea shops the food is often served on a tiered stand; there may be no sandwiches, but bread or scones with butter or margarine and optional jam or other spread, or toast, muffins or crumpets.[4][5][6]

Nowadays, a formal afternoon tea is usually taken as a treat in a hotel or tea shop. In everyday life, many Britons take a much simpler refreshment consisting of tea and biscuits at teatime.[citation needed]

While visiting Belvoir Castle, Anna Maria Russell, Duchess of Bedford, is credited as the first person to have transformed afternoon tea in England into a late-afternoon meal rather than a simple refreshment.[7]

Isabella Beeton, whose books on home economics were widely read in the 19th Century, describes afternoon teas of various kinds: the old-fashioned tea, the at-home tea, the family tea and the high tea and provides menus.[8]

High tea (also known as meat tea[9]) is an early evening meal, typically eaten between 5pm and 7pm. It is now largely followed by a lighter meal later in the evening.

High tea typically consists of a hot dish such as fish and chips, shepherd's pie, or macaroni cheese, followed by cakes and bread, butter and jam. Occasionally there would be cold cuts of meat, such as ham salad. Traditionally high tea was eaten by middle to upper class children (whose parents would have a more formal dinner later) or by labourers, miners and the like when they came home from work. The term was first used around 1825 and high is used in the sense of well-advanced (like high noon, for example) to signify that it was taken later in the day [10].

In its origin, the term “high tea” was used as a way to distinguish it from afternoon tea. It is stated that the words 'low' and 'high' refer to the tables from which either meal was eaten. Afternoon tea was served in the garden where possible; otherwise it was usually taken in a day room, library or salon where low tables (like a coffee table) were placed near sofas or chairs generally (hence the fallacy about it being low tea).[11] Most quality hotels in Britain serve afternoon tea, frequently in a palm court, and more recently have offered the option of champagne instead of tea.[12]

Many Australians and New Zealanders call the early evening meal "tea", while others refer to it as "dinner", both terms are understood to refer to the same thing. Calling a meal "tea" reflects the custom of northern England, Wales, and Scotland where "tea" refers to an evening meal.

During the working day a "tea break" or just "tea" can refer to morning/afternoon tea (corresponding to elevenses or a coffee break) or a break in the afternoon. This may be taken in a designated tea room. Colloquially, a break of this sort may also be called a smoko, particularly by tradesmen and in the building industry.

For most of the United States, the morning or afternoon break is not often referred to as tea as the beverage has not traditionally been a widespread choice with Americans. The term coffee break is used instead to denote a morning or afternoon break from work, or social gathering for a snack and short downtime, where hot and cold beverages and cakes, breads, and pastries are sometimes consumed.

The term "high tea" is also used in the United States to refer to afternoon tea or the "tea party," a very formal, ritualised gathering in which tea, thin sandwiches and little cakes are served on the best china. This usage is an analogical construction, the term "high" being associated with social formality (rather than a "high," or main, table).[citation needed]

This afternoon tea is increasingly served in high-end American hotels, and at a rising number of big-city teahouses, where it is sometimes described as "afternoon tea." The term "tea party" is still occasionally used in the U.S., either for a special occasion or in honor of a visiting celebrity or guest.[citation needed] 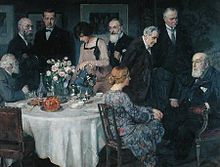 Similarly, in French speaking Europe one finds "le goûter"[13][14] or "le quatre heures",[15] in other words, the 4:00 afternoon snack, often prepared for children who have returned from school hungry. There are many kinds, but generally this snack could be a baguette or roll with butter and jam or chocolate shavings or spread, or chocolate cookies, accompanied by hot chocolate, or orange juice, but never with tea or coffee (café au lait or milky tea are for breakfast, tea and coffee being considered as too exciting for children at the end of the daytime). Goûter for adults may consist of fruit syrups in water or sparkling water, and light biscuits (cookies) or pastries. Although it never really went away, the custom is now becoming very trendy in France as a nostalgic wave of baby boomers recall their childhood gastronomic pleasures.

The goûter, for children, is different from the tea party in France, or "thé" in French, which is a little formal party in the afternoon given at home for adult guests, usually between 5 o'clock and 7 o'clock. It consists of tea, juices, limonades, or syrups, pastries, petits fours, and biscuits or cakes. The cocktail party is only given after 7 o'clock, and includes alcohol, as the "thé" doesn't.