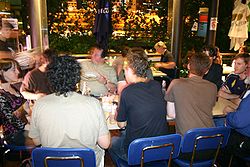 In human societies, eating is often a social occasion. 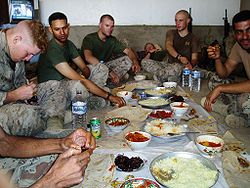 Marines having lunch with Iraqi soldiers during Operation Iraqi Freedom.

Eating is the ingestion of food to provide for all organism their nutritional needs, particularly for energy and growth. Animals and other heterotrophs must eat in order to survive: carnivores eat other animals, herbivores eat plants, omnivores consume a mixture of both plant and animal matter, and detritivores eat detritus. Fungi digest organic matter outside of their bodies as opposed to animals that digest their food inside their bodies. Eating is an activity of daily living.

Many homes have a kitchen room or outside (in the tropics) kitchen area devoted to preparation of meals and food, and may have a dining room, dining hall, or another designated area for eating. Some trains have a dining car. Dishware, silverware, drinkware, and cookware come in a wide array of forms and sizes. Most societies also have restaurants, food courts, and/or food vendors, so that people may eat when away from home, when lacking time to prepare food, or as a social occasion (dining club).[1] At their highest level of sophistication, these places become "theatrical spectacles of global cosmopolitanism and myth."[2] At picnics, potlucks, and food festivals, eating is in fact the primary purpose of a social gathering. At many social events, food and beverages are made available to attendees.

People usually have two or three meals a day regularly. Snacks of smaller amounts may be consumed between meals. Some propose not snacking, yet advocate three meals a day (of 600 kcal per meal) with four to six hours between.[3] Having three well-balanced meals (thus 1/2 of the plate with vegetables,[4] 1/4 protein food as meat, ... and 1/4 carbohydrates as pasta, rice, ...) will then account to some 1800–2000 kcal; which is the average requirement for a regular person.[5]

The issue of healthy eating has long been an important concern to individuals and cultures. Among other practices, fasting, dieting, and vegetarianism are all techniques employed by individuals and encouraged by societies to increase longevity and health.[citation needed] Some religions promote vegetarianism, considering it wrong to consume animals. Leading nutritionists believe that instead of indulging oneself in three large meals each day, it is much healthier and easier on the metabolism to eat five smaller meals each day (e.g. better digestion, easier on the lower intestine to deposit wastes; whereas larger meals are tougher on the digestive tract and may call for the use of laxatives)[citation needed]. However, psychiatrists with Yale Medical School have found that people who suffer from Binge Eating Disorder (BED) and consume three meals per day weigh less than those who have meals that are more frequent. Eating can also be a way of making money (see competitive eating).

Eating positions vary according to the different regions of the world where many cultures influence the way people eat their meals. In most of the Middle Eastern countries eating while sitting on the floor is considered the most common way to eat and it's believed to be healthier than eating while sitting to a table.[citation needed]

Many laboratory studies showed that overweight individuals are more emotionally reactive and are more likely to overeat when distressed than people of normal weight. Furthermore, it was consistently found that obese individuals experience negative emotions more frequently and more intensively than do normal weight persons.[8]

The naturalistic study of Lowe and Fisher compared the emotional reactivity and emotional eating of normal and overweight female college students. The study confirmed the tendency of obese individuals to overeat, but these findings applied only to snacks, not to meals. That means that obese individuals did not tend to eat more while having meals – rather, the amount of snacks they ate between meals was greater. One possible explanation that Lowe and Fisher suggest is that obese individuals often eat their meals with others and do not eat more than average due to the reduction of distress because of the presence of other people. Another possible explanation would be that obese individuals do not eat more than the others while having meals due to social desirability. Conversely, snacks are usually eaten alone.[8]

The control of food intake is a physiologically complex, motivated behavioral system. Hormones such as cholecystokinin, bombesin, neurotensin, anorectin, calcitonin, enterostatin, leptin and corticotropin-releasing hormone have all been shown to suppress food intake.[9][10]

Physiologically, eating is generally triggered by hunger, but there are numerous physical and psychological conditions that can affect appetite and disrupt normal eating patterns. These include depression, food allergies, ingestion of certain chemicals, bulimia, anorexia nervosa, pituitary gland malfunction and other endocrine problems, and numerous other illnesses and eating disorders.

A chronic lack of nutritious food can cause various illnesses, and will eventually lead to starvation. When this happens in a locality on a massive scale, it is considered a famine.