London Calling is the third studio album by the English punk rock band The Clash. It was released in the United Kingdom on 14 December 1979 through CBS Records, and in the United States in January 1980 through Epic Records. The album represented a significant change in The Clash's musical style, which now featured major elements of ska, funk, pop, soul, jazz, rockabilly and reggae far more prominently than in their previous two albums.[1]

The album's subject matter included social displacement, unemployment, racial conflict, drug use, and the responsibilities of adulthood.[2] The album received unanimously positive reviews and was ranked at number eight on Rolling Stone's list of The 500 Greatest Albums of All Time in 2003.[3] London Calling was a top ten album in the UK, and its lead single "London Calling" was a top 20 single.[4] It has sold over five million copies worldwide,[3] and was certified platinum in the United States.[5]

After recording their second studio album Give 'Em Enough Rope (1978), the band separated from their manager Bernard Rhodes.[6] This separation meant that the group had to leave their rehearsal studio in Camden Town and find another location to compose their music. Drawing inspiration from rockabilly, ska, reggae and jazz,[2] the band began work on the album during the summer of 1979. Tour manager Johnny Green had found the group a new place to rehearse called Vanilla Studios, which was located in the back of a garage in Pimlico.[7][8] The Clash quickly wrote and recorded demos, with Jones composing and arranging much of the music and Strummer writing the lyrics.[2]

In August 1979, the band entered Wessex Studios to begin recording London Calling. The Clash asked Guy Stevens to produce the album, much to the dismay of CBS Records.[9] Stevens had alcohol and drug problems and his production methods were unconventional.[2] While recording he would often swing ladders and throw chairs around the group to create an emotional atmosphere.[2] The Clash got along well with Stevens, especially bassist Paul Simonon, who found his work to be very helpful and productive to his playing and their recording as a band. While recording, the band would play football to pass the time. This was a way for them to bond together as well as take their mind off of the music, and the games got very serious. Doing this helped bring the band together, unifying them, making the recording process easier and more productive.[10] The entire album was recorded within a matter of weeks, with many songs recorded in one or two takes.[2]

"London Calling", the album's title track, was partially influenced by the March 1979 accident at a nuclear reactor at Three Mile Island in Pennsylvania. Strummer's lyrics also discuss the problems of rising unemployment, racial conflict and drug use in Britain.[11] The second track, "Brand New Cadillac", was written and originally recorded by Vince Taylor and was the first track recorded for London Calling. The band cite the song as "one of the first British rock'n'roll records" and had initially used it as a warm up song before recording.[12][13] "Rudie Can't Fail", the album's fifth song, features a horn section and mixes elements of pop, soul, ska and reggae music together. Its lyrics chronicle the life of a fun-loving young man who is criticised for his inability to act like a responsible adult.[1]

"Spanish Bombs" is a song about the Spanish Civil War.[14] It received positive reviews from critics, with one reviewer stating that its "combination of thoughtful lyrics and an energetic performance" made it a "highlight of London Calling".[15] The album's eighth track, "Lost in the Supermarket", was written by Strummer who imagined Jones' childhood growing up in a basement with his mother and grandmother.[16] "Clampdown" began as an instrumental track called "Working and Waiting".[14] Its lyrics comment on people who forsake the idealism of youth and urge young people to fight the status quo.[17] The tenth track, "The Guns of Brixton", was the first Paul Simonon composition the band recorded, and the first to feature him on lead vocals. Simonon was originally doubtful about the song's lyrics, which discuss an individual's paranoid outlook on life, but was encouraged to continue working on it by Strummer.[14]

The album's twelfth track, "Death or Glory", features Strummer looking back at his life, acknowledging the complications and responsibilities of adulthood.[18] While working on "The Card Cheat", the band recorded everything twice to create a "sound as big as possible".[19] "Revolution Rock", a reggae song, received mixed reviews from critics, and Strummer and Jones were criticised by NME for their inability to compose credible love songs.[20] The final track, "Train in Vain", was originally not included in the track list printed on the album's back cover.[21] The song was initially going to be given away for free through a promotion with NME, but when the deal fell through it was added to the album at the last minute.[22] 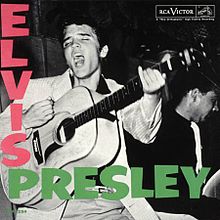 The typography of Elvis Presley's debut album influenced the design of London Calling.

The album's front cover features a photograph of Simonon smashing his Fender Precision Bass (on display at the Cleveland Rock and Roll Hall of Fame as of May 2009)[23] against the stage at The Palladium in New York City on 21 September 1979 during the Clash Take the Fifth US tour.[24][25] Pennie Smith, who photographed the band for the album, originally did not want the photograph to be used. She thought that it was too out of focus, but Strummer and graphic designer Ray Lowry thought it would make a good album cover.[25][26] In 2002, Smith's photograph was named the best rock and roll photograph of all time by Q magazine, commenting that "it captures the ultimate rock'n'roll moment - total loss of control".[27]

The cover artwork was designed by Lowry and was a homage to the design of Elvis Presley's self-titled debut album.[28][29] The cover was named the ninth best album cover of all time by Q magazine in 2001.[30]

The album cover for London Calling was among the ten chosen by the Royal Mail for a set of "Classic Album Cover" postage stamps issued in January 2010.[31][32]

The album was released in the United Kingdom on vinyl in 1979, and in the United States on vinyl and 8-track tape in 1980. A gatefold cover design of the LP was only released in Japan. Though London Calling was released as a double album it was only sold for about the price of a single album. The Clash's record label, CBS, at first denied the band's request for the album to be released as a double. In return CBS gave permission for the band to include a free 12-inch single that played at 33⅓ rpm. Ultimately, the planned 12-inch record became a second nine-track LP.[8]

A UK only cassette was released in 1986. A CD was released in the US in 1987, with a remastered version in the UK in 1999 followed by the US in 2000, along with the rest of the band's catalogue. In 2004, a 25th anniversary Legacy Edition was published with a bonus CD and DVD in digipack. The bonus CD features The Vanilla Tapes, missing recordings made by the band in mid-1979.[39] The DVD includes The Last Testament - The Making of London Calling, a film by Don Letts, as well as previously unseen video footage and music videos. A limited edition picture disc LP was released in 2010.

The album received very positive reviews from critics. It was named best album of the year in the 1980 Rolling Stone critics' poll[citation needed] and also topped the 1980 Village Voice Pazz & Jop critics' poll.[40] Robert Christgau described London Calling as "warm, angry, and thoughtful, confident, melodic, and hard-rocking" and called it "the best double-LP since Exile on Main Street".[41] Tom Carson wrote in Rolling Stone that "the record ranges across the whole of rock & roll's past for its sound, and digs deeply into rock legend, history, politics and myth for its images and themes. Everything has been brought together into a single, vast, stirring story — one that, as the Clash tell it, seems not only theirs but ours. For all its first-take scrappiness and guerrilla production, this two-LP set — which, at the group's insistence, sells for not much more than the price of one — is music that means to endure. It's so rich and far-reaching that it leaves you not just exhilarated but exalted and triumphantly alive."[42]

Stephen Erlewine of Allmusic wrote that London Calling was "invigorating, rocking harder and with more purpose than most albums, let alone double albums" and called it "one of the greatest rock & roll albums ever recorded".[43] Alternative Press included London Calling on its 2001 list of the 10 Essential '80s Albums.[55] Tom Carson of Rolling Stone said it "celebrates the romance of rock & roll rebellion in grand, epic terms",[42] and ranked London Calling number eight on its 2003 list of the 500 greatest albums of all time.[3] In the same year, Mojo magazine ranked the album at number twenty-two on its Top 50 Punk Albums.[56] London Calling was named album of the year by Stereo Review for 1980.

In 2004, Pitchfork reviewer Amanda Petrusich named "London Calling" the album's best song and wrote that "The Clash do not let go; each track builds on the last, pummeling and laughing and slapping us into dumb submission".[46] The website ranked the album at number two on its list of the Top 100 Albums of the 70s.[57] Sal Ciolfi of PopMatters called the album a "big, loud, beautiful collection of hurt, anger, restless thought, and above all hope" and wrote that "if released tomorrow would still seem relevant and vibrant",[47] and the College Music Journal ranked it at number three on its Top 20 Most-Played Albums of 1980.[58] In 2007, London Calling was inducted into the Grammy Hall of Fame, a collection of recordings of lasting qualitative or historical significance.[59] The album was included in the BBC Radio 1 2009 Masterpieces Series, marking it as one of the most influential albums of all time, some thirty years after its original release.[60]

In December 2010, the BBC reported that a film about the recording of London Calling was in the early stages of production. Mick Jones and Paul Simonon are working as executive producers for the film. The script was written by Jez Butterworth and shooting would begin in 2011. Alison Owen and Paul Trijbits had been chosen as the producers.[61][62]

All songs written and composed by Joe Strummer and Mick Jones, except where noted.

On the original version of the album, "Train in Vain" was not listed on the sleeve, nor the label on the record itself, but an extraneous sticker indicating the track was affixed to the outer cellophane wrapper. It was also scratched into the vinyl in the run-off area on the fourth side of the album.

The 25th Anniversary Edition of the album was released in 2004 and contains The Vanilla Tapes (an early version of the album based on a lost master tape, and previously only available as a bootleg) as a bonus disc, and a DVD featuring the making of the album, the music videos and video footage of The Clash recording in Wessex Studios.