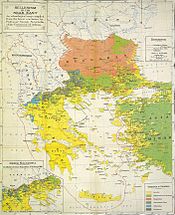 Hellenism (yellow) in the Near East during and after World War I by George Soteriadis of the University of Athens. 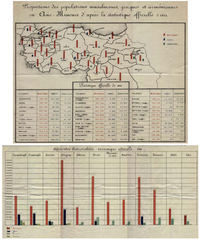 In the Ottoman Empire, in accordance with the Muslim dhimmi system, Greeks, as Christians, were guaranteed limited freedoms (such as the right to worship), but were treated as second-class citizens. Christians and Jews were not considered equals to Muslims: testimony against Muslims by Christians and Jews was inadmissible in courts of law. They were forbidden to carry weapons or ride atop horses, their houses could not overlook those of Muslims, and their religious practices would have to defer to those of Muslims, in addition to various other legal limitations.[1] Violation of these statutes could result in punishments ranging from the levying of fines to execution.

The Ecumenical Patriarch was recognized as the highest religious and political leader (millet-bashi, or ethnarch) of all Orthodox Christian subjects of the Sultan, though in certain periods some major powers, such as Russia (under the Treaty of Küçük Kaynarca of 1774), or Great Britain claimed the rights of protection over the Ottoman Empire's Orthodox subjects.

The three major European powers, Great Britain, France and Russia (known as the Great Powers), took issue with the Ottoman Empire's treatment of its Christian minorities and increasingly pressured the Ottoman government (also known as the Sublime Porte) to extend equal rights to all its citizens. Beginning in 1839, the Ottoman government implemented the Tanzimat reforms to improve the situation of minorities, although these would prove largely ineffective. In 1856, the Hatt-ı Hümayun promised equality for all Ottoman citizens irrespective of their ethnicity and confession, widening the scope of the 1839 Hatt-ı Şerif of Gülhane. The reformist period peaked with the Constitution, called the Kanûn-ı Esâsî (meaning "Basic Law" in Ottoman Turkish), written by members of the Young Ottomans, which was promulgated on November 23, 1876. It established freedom of belief and equality of all citizens before the law.

On July 24, 1908, Greeks' hopes for equality in the Ottoman Empire brightened with the removal of Sultan Abd-ul-Hamid II (r. 1876–1909) from power and restored the country back to a constitutional monarchy. The Committee of Union and Progress (more commonly called the Young Turks), a political party opposed to the absolute rule of Sultan Abd-ul-Hamid II, had led a rebellion against their ruler. The pro-reform Young Turks deposed the Sultan and replaced him with the ineffective Sultan Mehmed V (r. 1908–1918).

Before World War I, there were an estimated 1.8 million Greeks living in the Ottoman Empire.[2] Some prominent Ottoman Greeks served as Ottoman Parliamentary Deputies. In the 1908 Parliament, there were twenty-six (26) Ottoman Greek deputies but their number dropped to eighteen (18) by 1914.[3]

From 1914 until 1923, Greeks in Thrace and Asia Minor were subject to a campaign including massacres and internal deportations involving death marches. The International Association of Genocide Scholars (IAGS) recognizes it as genocide and refers to the campaign as the Greek Genocide.[4]

After the fall of Constantinople in 1453, when the Sultan virtually replaced the Byzantine emperor among subjugated Christians, the Ecumenical Patriarch of Constantinople was recognized by the Sultan as the religious and national leader (ethnarch) of Greeks and the other ethnicities that were included in the Greek Orthodox Millet. The Patriarchate earned a primary importance and occupied this key role among the Christians of the Ottoman Empire because the Ottomans did not legally distinguish between nationality and religion, and thus regarded all the Orthodox Christians of the Empire as a single entity.

The position of the Patriarchate in the Ottoman state encouraged projects of Greek renaissance, centered on the resurrection and revitalization of the Byzantine Empire. The Patriarch and those church dignitaries around him constituted the first centre of power for the Greeks inside the Ottoman state, one which succeeded in infiltrating the structures of the Ottoman Empire, while attracting the former Byzantine nobility.

The Greeks were a self-conscious group within the larger Christian Orthodox religious community established by the Ottoman Empire.[5] They distinguished themselves from their Orthodox co-religionists by retaining their Greek culture, customs, language, and tradition of education.[5][6] Throughout the post-Byzantine and Ottoman periods, Greeks, as members of the Ecumenical Patriarchate of Constantinople, declared themselves as Graikoi (Greek: Γραικοί, "Greeks") and Romaioi or Romioi (Greek: Ρωμαίοι/Ρωμηιοί, "Romans").[7][8][9]