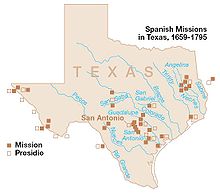 The Spanish Missions in Texas comprise a series of religious outposts established by Spanish Catholic Dominicans, Jesuits, and Franciscans to spread the Christian doctrine among the local Native Americans, but with the added benefit of giving Spain a toehold in the frontier land. The missions introduced European livestock, fruits, vegetables, and industry into the Texas region. In addition to the presidio (fort) and pueblo (town), the misión was one of the three major agencies employed by the Spanish crown to extend its borders and consolidate its colonial territories. In all, twenty-six missions were maintained for different lengths of time within the future boundaries of the state.

Since 1493, Spain had maintained a number of missions throughout New Spain (Mexico and portions of what today are the Southwestern United States) in order to facilitate colonization of these lands. The East Texas missions were a direct response to fear of French encroachment when the remains of La Salle's Fort Saint Louis were discovered near Matagorda Bay in 1689.

In the closely supervised setting of the mission the native Americans were expected to mature in Christianity and Spanish political and economic practices until they would no longer require special mission status. Then their communities could be incorporated as such into ordinary colonial society. This transition from official mission status to ordinary Spanish society, when it occurred in an official manner, was called "secularization." In this official transaction, the mission's communal properties were privatized, the direction of civil life became a purely secular affair, and the direction of church life was transferred from the missionary religious orders to the Catholic diocesan church. Although colonial law specified no precise time for this transition to take effect, increasing pressure for the secularization of most missions developed in the last decades of the 18th century.

This mission system was developed in response to the often very detrimental results of leaving the Hispanic control of relations with native Americans on the expanding frontier to overly enterprising civilians and soldiers. This had resulted too often in the abuse and even enslavement of the Indians and a heightening of antagonism.

In the end, the mission system was not politically strong enough to protect the native Americans against the growing power of ranchers and other business interests that sought control over mission lands and the manpower represented by the native Americans. In the first few years of the new Republic of Mexico-between 1824 and 1830-all the missions still operating in Texas were officially secularized, with the sole exception of those in the El Paso district, which were turned over to diocesan pastors only in 1852.

Within boundaries of Spanish Texas

Spanish Texas was a part of New Spain. On its southern edge, Texas was bordered by the province of Coahuila. The boundary between the provinces was set at the line formed by the Medina and the Nueces Rivers, 100 miles (161 km) northeast of the Rio Grande.[1] On the east, Texas bordered French Louisiana. Although Spain claimed that the Red River formed the boundary between the two, France insisted that the border was the Sabine River, 45 miles (72 km) to the west.[2] 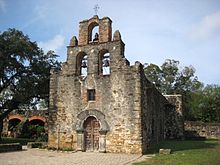 The first mission established within the boundaries of Spanish Texas was San Francisco de la Espada. In 1689, Spanish authorities found the remnants of a French settlement, Fort Saint Louis.[3] During their expedition, the Spanish met representatives of the Caddo people, who lived between the Trinity and the Red Rivers. The Caddo expressed interest in learning about Christianity,[4] and the following year Alonso De León 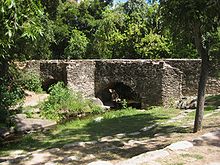 led an expedition to establish a mission in East Texas. It was completed near the Hasinai village of Nabedaches in late May, and its first mass was conducted on June 1, 1690.[5][6]

In its first two years of existence, the mission faced much hardship, as floodwaters and then drought destroyed their crops. After an epidemic killed half of the local population, the Hasinai became convinced that the missionaries had caused the deaths.[7] Fearing an attack, on October 25, 1693 the missionaries buried the mission bell, set the building ablaze, and retreated to Mexico.[8]

Mission Santísimo Nombre de María was the second mission established by the Spanish in East Texas. Built for the native Neches population, the mission opened in September 1690 6 miles (10 km) northeast of Mission San Francisco. The mission consisted of a straw chapel and a house for the priest. It was destroyed by a flood in 1692. [10] 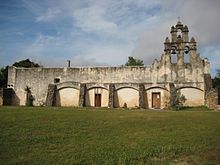 By 1762, the mission consisted of a stone chapel with stone rooms for the priests and the soldiers who lived at the mission. Rooms made of adobe were built along the walls to house the 200 resident native American peoples.[11] The mission was secularized in 1794, with the property divided among the remaining mission Indians. A priest continued to hold church services there, but other mission activities ended.[12] The church has been restored and is still an active parish.[12] 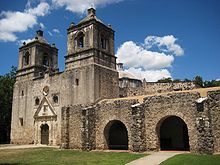 This mission was originally established on the Angelina River in East Texas in 1716 as Mission Nuestra Señora de la Purísima Concepción de los Ainais. It served the Ainais tribe. It was closed because of the French threat and reopened in 1721. In 1730, it moved temporarily to present-day Austin before moving to San Antonio in 1731, where it was renamed Mission Nuestra Señora de la Purísima Concepción de Acuña.[13] The name was changed because the mission no longer served the Ainais tribe, and its new name honored the current viceroy of Mexico.[14]

The mission inherited the lands of the closed Mission San Franscisco Xavier de Najera 3 miles (5 km) south of San Antonio de Valero. Most of the native Americans at the mission were Coahuiltecans who disliked the hard work of mission life. The native Americans often ran away and were brought back forcibly by soldiers or priests.[14]

The current church building was completed in 1755 and is the oldest unrestored stone church in the United States. It is built in the shape of a cross, with walls that are 45 inches (1.1 m) thick. The mission was closed in 1794, with the property divided among the resident native Americans, all of whom has left by 1800.[15] For a time, the buildings were used as a cattle barn, but in 1855 the land and church were given to the Brothers of Mary, who cleaned it and began conducting services again. It is now open to the public for prayer, and is part of the National Park Service.[11]

Mission San José de los Nazonis was the third mission established in East Texas in 1716. Located near a Nazoni village, the mission was near the present-day site of Cushing, Texas. Although the mission closed after the French took the presidio at Los Adaes, it was reopened several years later by the Marquis de San Miguel de Aguayo. In 1730, it was moved to what is now Austin, Texas before being permanently relocated to San Antonio, where it became known as San Juan Capistrano.[13]

Mission Nuestra Señora de Guadalupe de los Nacogdoches was established in 1716 in East Texas to serve the Nacogdoche tribe.[13] It closed several years later because of threats from French Louisiana but reopened in 1721. The mission continued until 1773, when the Spanish government ordered all of East Texas to be abandoned. In 1779, Antonio Gil Ybarbo led a group of settlers who had been removed from Los Adaes to the area to settle in the empty mission buildings. This began the town of Nacogdoches, Texas.[16]

Mission San Miguel de Linares de los Adaes was the fifth mission established in East Texas in 1716–1717. The mission was to serve the native American village of Adaes just 20 miles (32 km) west of the French fort at Natchitoches, Louisiana. At that time the Spanish claimed the Red River to be the eastern boundary of Texas, so the mission was considered part of Spanish Texas despite being in what is now considered Louisiana.[16]

The mission was attacked by French soldiers in 1719 and was closed. Three years later, the Marquis de San Miguel de Aguayo reopened the mission, but at a site closer to the Presidio of Los Adaes. The mission remained open until 1773.[16]

Mission San Antonio de Valero was established on May 1, 1718 as the first Spanish mission along the San Antonio River. It was named for San Antonio de Padua, the patron saint of the mission's founder, Father Olivares as well as the viceroy of New Spain, the Marquis de Valero. The mission later became known as the Alamo.[17]

Its first location was west of San Pedro Springs, and after being moved several times, it was finally established above a bend in the San Antonio River, where it would be easy to defend. The early mission buildings were made of grass, and the first stone building was built in 1727. The building now known as the Alamo was not built until 1744, and most of its actual structure does not remain. The mission eventually grew to include a granary, workhouse, and rooms for the priests, native peoples, and soldiers. To protect from frequent Apache raids, a wall surrounded the buildings. Outside the wall were farmlands and ranches owned by the mission.[18]

The mission served the Coahuiltecan native Americans until 1793, when mission activities ended. AT that time the land and livestock were divided among the thirty-nine Indians remaining at the mission. The buildings later served as a home for a Mexican army unit before becoming a military hospital in 1806. During the Texas Revolution, the buildings served as the site of the Battle of the Alamo,[19] and during the Mexican-American War supplies for the U.S. Army were stored there. The buildings are now owned by the state of Texas and operated as memorial by the Daughters of the Republic of Texas.[20] 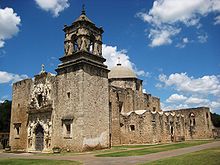 Shortly after its founding, Mission San Antonio de Valero became overcrowded with refugees from the closed East Texas missions, and Father Antonio Margil received permission from the governor of Coahuila and Texas, the Marquis de San Miguel de Aguayo, to build a new mission. On February 23, 1720, the new mission, San José y San Miguel de Aguayo was established[21] 5 miles (8 km) south of San Antonio de Valero. Like San Antonio de Valero, Mission San José served the Coahuiltecan natives. The first buildings, made of brush, straw, and mud, were quickly replaced by large stone structures, including guest rooms, offices, a dining room, and a pantry. A heavy outer wall was built around the main part of the mission, and rooms for 350 Indians were built into the walls.[22]

A new church, which is still standing, was constructed in 1768 from local limestone.[23] The mission lands were given to its Indians in 1794, and mission activities officially ended in 1824. After that, the buildings were home to soldiers, the homeless, and bandits. It was restored in the 1930s[24] and is now a state and national historic site.[25] 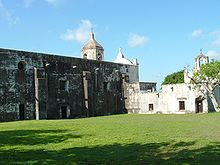 Mission San Francisco Xavier de Nájera was established in 1722 as a result of a promise made by the Marquis de San Miguel de Aguayo, the governor of Spanish Texas. The previous year, Aguayo had asked the chief of a band of Rancheria Grande natives to guide him to East Texas to reopen the missions there; in return, Aguayo promised to open a mission along the San Antonio River for the chief's tribe. The new mission was established 3 miles (5 km) south of San Antonio de Valero and was initially populated by fifty native American families.[25] The families did not stay long, and by 1726 the mission closed. Its lands were later given to Mission Nuestra Señora de la Purísima Concepción de Acuña.[14]

Outside boundaries of Spanish Texas