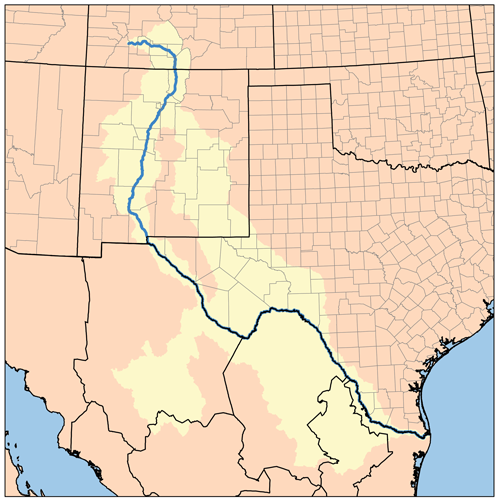 caption = Map of the Rio Grande Watershed.
origin = southern , in Hinsdale County
mouth = ; Cameron County, , and Matamoros municipality,
basin_countries = ,
length = convert|3034|km|mi|0|abbr=on
elevation = convert|3900|m|ft|-1|abbr=on at source to at mouth
discharge = averages 160m³/sec
watershed = convert|607965|km2|sqmi|0|abbr=onKnown as the Rio Grande in the and as the Río Bravo (or, more formally, the Río Bravo del Norte) in , this , convert|1885|mi|km|0 long, is the third longest river system in the United States

The Rio Grande rises in the east in the U.S. state of . It is formed by the confluence of several streams at the base of Canby Mountain, just east of the . From there, it flows through the , then south into through Albuquerque and Las Cruces to El Paso, , where it begins to form the border between the U.S. and Mexico. A major tributary, the , enters at , below El Paso, and supplies most of the water in the convert|1254|mi|km|0 Texas border segment. Other known tributaries include the Pecos and the smaller Devils, which join the Rio Grande on the site of Amistad Dam. Despite its name and length, the Rio Grande is not navigable by oceangoing ships, nor are there smaller craft using it as a route. In fact it is barely navigable at all. Its natural flow is only 1/20 the volume of the Colorado River, and less than 1/100 that of the Mississippi.Fact|date=July 2008

The river has, since 1848, marked the boundary between Mexico and the United States from the twin cities of , and Ciudad Juárez, Chihuahua, to the . As such, it was across this river that Texan slaves fled when seeking their freedom, aided by Mexico's liberal colonization policies and abolitionist stance. [PDFlink| [http://crm.cr.nps.gov/archive/21-4/21-4-13.pdf "The UGRR on the Rio Grande"] |105 KiB ]

The major international border crossings along the river are Ciudad Juárez and El Paso; , and ; , and Nuevo Laredo, Tamaulipas; McAllen-Hidalgo, Texas, and Reynosa, Tamaulipas; and , and . Other notable border towns are the / pairings of Del Rio&ndash; and Eagle Pass&ndash;Piedras Negras.

The US and Mexico share the waters of this river under a series of agreements administered by the joint US-Mexico Boundary and Water Commission. The most notable of these were signed in 1906 and 1944.

Use of that belonging to the US is regulated by the , an interstate pact between Colorado, New Mexico and Texas. The Rio Grande is over-appropriated, that is, there are more users for the water than there is water in the river. Because of both drought and overuse the section from El Paso downstream through was recently tagged "The Forgotten River" by those wishing to bring attention to the river's deteriorated condition. Fact|date=October 2008

In the summer of 2001 a 100 m wide sandbar formed at the mouth of the river, marking the first time in recorded history that the Rio Grande failed to empty into the Gulf of Mexico. The sandbar was subsequently dredged, but it re-formed almost immediately. Spring rains the following year flushed the re-formed sandbar out to sea, but it returned in the summer of 2002. As of September 2006, the river once again reaches the Gulf. However, ecologists fear that unless rainfall returns to normal levels during the next few years and strict water conservation measures are adopted by communities along the river, the Rio Grande may soon become extinct.Fact|date=August 2007

The Rio Grande rises in high mountains and flows for much of its length at high elevation; El Paso is convert|3762|ft|m|0 above . In New Mexico, the river flows through the from one -filled basin to another, cutting s between the basins and supporting a fragile ecosystem in its . From El Paso eastward the river flows through . Only in the lower is there extensive irrigated agriculture. The river ends in a small y delta at the . Due to the persistent period of dry weather, the river has only occasionally emptied into the Gulf Of Mexico since 2002. [http://www.google.com/maps?ie=UTF8&z=14&ll=25.950096,-97.1733&spn=0.070385,0.107803&t=k&om=1 Google Satellite Map]

The Rio Grande was designated as one of the in 1997.

In Mexico it is known as Río Bravo or " _es. Río Bravo del Norte", " _es. bravo" meaning "fierce" or "brave". There is a city along its banks that bears its name () located 10 miles east of , and directly across from the Texas city of Pharr.

"Rio del Norte" was the most common name for the upper Rio Grande (roughly, within the present-day borders of New Mexico) from Spanish colonial times to the end of the Mexican period in the mid-19th century. Its use was first documented in 1582. The use of the modern English name "Rio Grande" began with the early American settlers in . By the late 19th century, the name Rio Grande for the entire river, from to the sea, had become standard in the United States.

"Rio Bravo" had become the standard Spanish name for the lower river, below its confluence with the , by 1602.

Note that the four names probably predate the Spanish entrada by several centuries.

* [http://www.borderstories.org/index.php/ebanos-crossing.html Border Stories: the only hand pulled ferry on the Rio Grande (video)]
*Handbook of Texas|id=RR/rnr5|name=Rio Grande
* [http://texashistory.unt.edu/data/UNT/Maps/meta-pth-2480.tkl 1854 map of Rio Grande entrance] (hosted by the [http://texashistory.unt.edu/ Portal to Texas History] ).
* [http://www.chimneyparkresort.com/webcam.html Rio Grande Cam - in Mission Texas. Mexico is on the left and the US is on the right.]
* [http://www.ppl.nl/index.php?option=com_wrapper&view=wrapper&Itemid=82 Bibliography on Water Resources and International Law] Peace Palace Library