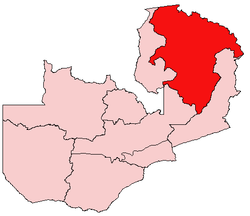 Northern Province is one of Zambia's nine provinces. It covers approximately one fifth of Zambia in land area. The provincial capital is Kasama. The province is made up of 12 districts, namely Kasama (the provincial capital), Chilubi, Isoka, Chinsali, Kaputa, Luwingu, Mbala, Mporokoso, Mpika, Mpulungu, Mungwi and Nakonde. Currently, only Kasama and Mbala have attained municipal council status, while the rest are still district councils. It is widely considered to be the heartland of the Bemba, one of the largest tribes in Zambia.

Efforts are being made by the Zambian government, along with a number of non-governmental organizations, to increase the visibility of the many natural and historical treasures in the Northern Province. Tourism has proven an effective way to bring economic growth in other parts of Zambia, i.e. Livingstone and Victoria Falls. However, a lack of infrastructure along the vast distances between major points of interest makes visiting this part of the country difficult.

Northern Province, with a total area of 147,286 square kilometers, is the largest of Zambia's 9 provinces. It shares borders not only with three other provinces - Central, Eastern and Luapula, but also with three countries as well - the Democratic Republic of Congo in the north, Tanzania in the north-east, and Malawi in the east.

The Northern Province lies mainly on the great southern African plateau which has been uplifted to an elevation around 1200 metres above sea level. Rift valleys extend clockwise around the province from the north-west to the south. These rift valleys are sometimes outside the borders of the province, as in the case of the Luapula-Mweru valley to the north-west and the Lake Rukwa and Lake Malawi rift valleys to the north east; but the escarpments of the Lake Mweru-wa-Ntipa-Lake Tanganyika rifts in the north, and the Luangwa Valley rift in the east and south-east are just within the province. In places the rift valleys have pushed up highlands: around Kambole and Mbala above Lake Tanganyika, the Muchinga escarpment above the Luangwa valley, and the highlands along north-eastern border with Tanzania and Malawi which culminate in the Mafinga Hills and Nyika Plateau.

These features produce a diverse landscape that varies and poses different challenges, particularly to highway construction, as one moves from one part to another. The Mafinga Hills, which include the highest point in the country at 2301 metres above sea level, once formed a formidable barrier between the Northern and Eastern Provinces that few but the best 4-wheel drive vehicles dared to cross, especially during the rainy season. The shortest road link between the two provinces is now eased by the rehabilitation of the Isoka-Muyombe Road, which traverses their lower slopes.

Rivers, streams and dambos criss-cross the province in profusion, posing yet another great challenge to easy movement of people, goods, and services. The most prominent river on the eastern side is the Luangwa, which has its source in the Mafinga Hills, and which has no road across its valley for a distance of about 800 km. Africa's second longest river, the Congo, has its source in Northern Province via its longest tributary, the Chambeshi River, which rises in the hills south-west of Mbala and divides the province diagonally as it meanders to Lake Bangweulu in the south-west. During times of very heavy rains, these rivers, particularly the Chambeshi and Luangwa, spread across floodplains often several kilometres wide, and create large tracts of both seasonal and permanent lagoons and swamps along their valleys. The Chambeshi feeds the largest wetlands of all, the Bangweulu Swamps and floodplain in Mpika and Chilubi Districts, known for its Lechwe and birds among other wildlife.

The province also contains three large natural lakes - Lake Bangweulu and its adjacent wetlands (shared with Luapula Province), Lake Mweru-wa-Ntipa in Kaputa District, and the vast Lake Tanganyika in the north, which forms part of Zambia's border with DR Congo and Tanzania.

National parks and other wildlife areas

The rapid annual population growth is attributed to various factors. For instance, the high growth rate in Nakonde is due to the free cross-border trade between Zambia and Tanzania, which has triggered rapid settlement in the district. The high economic potential of the Chambeshi River valley, especially in agriculture, explains the rapid growth rate in Mungwi, while the 6.0% for Mporokoso is attributed to the influx of refugees from DR Congo.

Northern Province has a number of tribal groups speaking different languages and dialects. However, the language mostly spoken across the province is Icibemba, which is the mother tongue of the largest tribal grouping, the Bemba people of Chinsali, Kasama, Mungwi and parts of Mporokoso and Luwingu districts. Other prominent languages include Icinamwanga, spoken by the Namwanga people of Nakonde and Isoka districts, ChiTumbuka, spoken by the Tumbuka people of Isoka, and Icimambwe, spoken by the Mambwe of Mbala district. Despite its size and the diversity of languages and dialects, the people of Northern Province generally share a common culture.

Each of these tribes has its own traditional leadership headed by either a paramount or senior chief assisted by junior chiefs and village headmen. The most prominent of the chiefs in the province is Chitimukulu, Paramount Chief of the Bemba. Others include Senior Chief Kopa of the Bisa, Senior Chief Muyombe of the Tumbuka, Senior Chieftainess Nawaitwika of the Namwanga, and Senior Chief Tafuna of the Lungu and Mambwe.

Northern Province has completely no industries at all, and its primary economic activity is agriculture. The most commonly grown crops are maize, millet, sorghum, groundnuts, beans, and rice. Most of the food produced is consumed within the province, though a small percentage is bought by traders for resale along the line of rail.

There are very few farmers who grow crops on a commercial basis in the province. Most of the people are peasant subsistence farmers using the traditional "slash and burn" shifting cultivation locally known as "chitemene", and are barely able to even produce enough to feed themselves. There is also some commercial fishing being done on Lake Tanganyika by established fishing companies in Mpulungu. Most of the fish caught is taken for sale in Lusaka and the Copperbelt on refrigerated trucks. Fishing is also done by small-scale fishermen, who sell their small catches to local traders and others who resell the fish in the nearby towns of Mbala and Kasama.

Mpulungu, 208 km from Kasama, is Zambia's only port, and its harbour is generally used to export bulky goods, such as sugar and cement, to Rwanda and the Democratic Republic of the Congo. In turn, Zambia also imports Kapenta (small, dried fish) and other merchandise from these two countries, as well as Tanzania, through the same port.

Northern Province has poor communication infrastructure. The telecommuncation facilities, which were obsolete until 2005, have somewhat improved with the introduction of cellular phone services in all 12 districts. Prior to this, the situation was so bad that it was easier to make a telephone call outside the province than to any other district within the province as the telephone facilities in these districts were often out of use. However, these cellular phone services are quite costly for government ministries to afford.

The road network is in a poor state. Despite having a total area of 147,286 square kilometers, the province has approximately only 900 kilometers of tarmac, a large portion of which is in dire need of rehabilitation. The rest are gravel roads, the majority of which are in so bad a state that they are almost impassable.

The administration at district level is headed by the District Commissioner (appointed by the Republican President), who combines the role of political head with that of overseer of the Civil Service in the district. Each government department has a district head, while the municipal and district councils are headed by Mayors and Council Secretaries respectively.

Northern Province has twenty-four high schools. Twenty-one are run by the government, while four are grant-aided (managed by the Catholic Church and the United Church of Zambia with financial support from the government).

All the government high schools run from Grade 10 to 12, while the four managed by the church run from Grade 8 to 12. Six of them are single-sex schools, while the rest admit both girls and boys. There are eight schools that enroll boarding pupils only, while all the others enroll both boarding and day pupils. 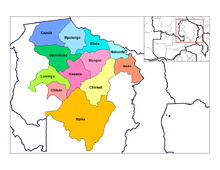 Northern Province is divided into 12 districts: