Livingstone or Maramba is a historic colonial city and present capital of the Southern Province of Zambia, a tourism centre for the Victoria Falls lying 10 km (6.2 mi) north of the Zambezi River, and a border town with road and rail connections to Zimbabwe on the other side of the Falls. Its population was estimated in 2002 at 97,000[1].

Mukuni, 10 km (6.2 mi) to the south-east, was the largest village in the area before Livingstone was founded. Its Baleya inhabitants, originally from the Rozwi culture in Zimbabwe, were conquered by Chief Mukuni who came from the Congo in the 18th century. Another group of Baleya under Chief Sekute lived near the river west of the town. The most numerous people in the area, though, were the Batoka under Chief Musokotwane based at Senkobo, 30 km (19 mi) north. These are southern Tonga people but are culturally and linguistically similar to the Baleya and grouped with them as the 'Tokaleya'.[2] 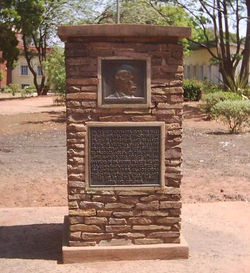 The Tokaleya paid tribute to the Lozi of Barotseland but in 1838 the Kololo, a Sotho tribe from South Africa displaced by Zulu wars, migrated north and conquered the Lozi. The Kololo placed chiefs of their subordinate Subiya people of Sesheke over the Tokaleya. In 1855 Scottish missionary explorer David Livingstone became the first European to explore the Zambezi in the Livingstone vicinity and to see Victoria Falls when he was taken there by the Subiya/Kololo Chief Sekeletu.[3]

In 1864 the Lozi threw off their Kololo masters and re-established their dominance over the Subiya and the Tokaleya in the vicinity of the Falls, which became the south-eastern margin of the greater Barotseland kingdom.[2]

In the 1890s Cecil Rhodes' British South Africa Company established imperial rule north of the Zambezi and launched a wave of mineral prospecting and exploitation of other natural resources such as timber, ivory and animal skins in the territory it called North-Western Rhodesia. The main crossing point of the Zambezi was above the falls at the Old Drift, by dugout canoe, later an iron boat propelled by eight Lozi paddlers, or a barge towed across with a steel cable. The Batoka Gorge and the deep valley and gorges of the middle Zambezi (now flooded by the Kariba Dam) meant there was no better crossing point between the Falls and Kariba Gorge, 500 km (310 mi) north-east. As the Old Drift crossing became more used, a settlement sprang up there and around 1897 it became the first municipality in the country and is sometimes referred to as 'Old Livingstone'. Proximity to mosquito breeding areas caused deaths from malaria, so after 1900 the Europeans moved to higher ground known as Constitution Hill or Sandbelt Post Office, and as that area grew into a town it was named Livingstone in honour of the explorer.[4]

In the mid 1890s Rhodesian Railways had reached Bulawayo in Southern Rhodesia spurring industrial development there, fuelled by the coal mines at Hwange just 110 km (68 mi) south-east of Mosi-oa-Tunya. The railway was extended to Hwange for the coal, but Rhodes' vision was to keep pushing north to extend the British Empire, and he would have built it to Cairo if he could. In 1904 the railway reached the Falls on the southern side and construction of the Victoria Falls Bridge started. Too impatient to wait for its completion, Rhodes had the line from Livingstone to Kalomo built and operations started some months in advance of the bridge using a single locomotive which was conveyed in pieces by temporary cableway across the gorge next to the bridge building site.[5]

With the new Bridge open in September 1905, Livingstone boomed and the British South Africa Company moved the capital of the territory there in 1907.[4] In 1911 the company merged the territory with North-Eastern Rhodesia as Northern Rhodesia.

Livingstone prospered from its position as a gateway to trade between north and south sides of the Zambezi, as well as from farming in the Southern Province and commercial timber production from forests to its north-west. A number of colonial buildings were erected which still stand.[3] Although the capital was moved to Lusaka in 1935 to be closer to the economic heartland of the Copperbelt, industries based on timber, hides, tobacco, cotton (including textiles) and other agricultural products grew up. A hydroelectric plant was built taking water from the Eastern Cataract of the Falls. The town of Victoria Falls in Southern Rhodesia had the tourist trade, but many supplies were bought from Livingstone.

Of all the towns in Northern Rhodesia, colonial Livingstone took on a character most like those of Southern Rhodesia or South Africa at that time, with a strongly marked segregation which while not being officially enshrined as an apartheid policy, had similar practical effects. The north and western halves of the town and the town centre were reserved for the colonial government and white-owned businesses and associated residential areas, while African townships such as Maramba (named after the small Maramba River flowing nearby) were in the east and south. Asians and people of mixed race owned businesses in the middle, on the eastern side of the centre.

As independence approached and for a few years after, many whites in the town moved to Rhodesia or South Africa. 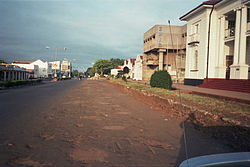 Main street in 1999. The streets of Livingstone today are modern, clean and complete with shopping malls, theatres and restaurants

At independence, Livingstone had the benefit of some spending by the new government on development. This included a vehicle assembly plant, as well as the benefit of tourism by the army of expatriates hired to assist those projects, as well as by Zambians experiencing for the first time the pride and freedom of their own country. However, from the late 1960s, when the Rhodesian UDI crisis forced Zambia to close the border at Livingstone (see the main article on Victoria Falls for details) the town suffered economic decline due to a fall in tourism and the loss of trade to the south. The timber industry ended as the forests around Mulobezi were used up, and the manufacturing industry suffered from the inefficiencies of state-run enterprises. In the 1970s and 80s this was exacerbated by national economic woes brought on by low copper prices and the failure of the government's economic management, so that when trade to the south re-started with Zimbabwean independence in 1980, Livingstone could not take advantage of it. The town seemed stuck in a time warp and was unable to afford new development or maintain the existing infrastructure. Although this meant that historic colonial buildings were not replaced by new development, it also meant the town could not afford to adequately preserve those that it had.[6]

In the 1981 movie The Grass is Singing (based on the Doris Lessing novel of that name) and starring Karen Black, John Thaw and John Kani, Livingstone was used as the location for a Southern Rhodesian town around 1950, for which year some of the streets in Livingstone could pass without modification.[7]

In the last ten years, although manufacturing industry has continued to decline with the closure of textile businesses unable to compete with Asian imports,[6] With the demise of Zimbabwe, Livingstone has experienced a resurgence in tourism and has firmly become the destination of choice when visiting the Victoria Falls. Livingstone has enjoyed a influx of investment in the industry from modern and sophisticated hotel chains like Sun International, to modern shopping centers and restaurants [8].

Apart from tourism, the other hope on Livingstone's horizon is development stimulated by the Walvis Bay Corridor with the opening of the Katima Mulilo Bridge and completion of the Trans–Caprivi Highway 200 km (120 mi) east, which funnels more trade through the town.

The name Maramba predates Livingstone as the name of the river flowing on the eastern outskirts and the large township next to it. The name is used for a number of places and features in Livingstone and has been proposed as a new or alternative name for the city as a whole. Livingstone is the only non-African name for a town or city town in Zambia not changed since independence, largely due to the influence of first president Kenneth Kaunda, whose father was educated by Scottish missionaries who followed in David Livingstone's footsteps. However several websites (including some United Nations ones) and some maps jumped the gun on any decision, and wrongly report that it is now called Maramba.[9] The town's recent tourism success may mean that any change is less likely as businesses are likely to resist anything which would affect recognition of the town as an international tourist destination.

Livingstone has a humid subtropical climate with hot and rainy summers and very hot springs and mild, dry winters with large temperature differences between day and night.

See the main article Transport in Zambia for more details.

Features and attractions of Livingstone

Livingstone's main places of interest are:[3]