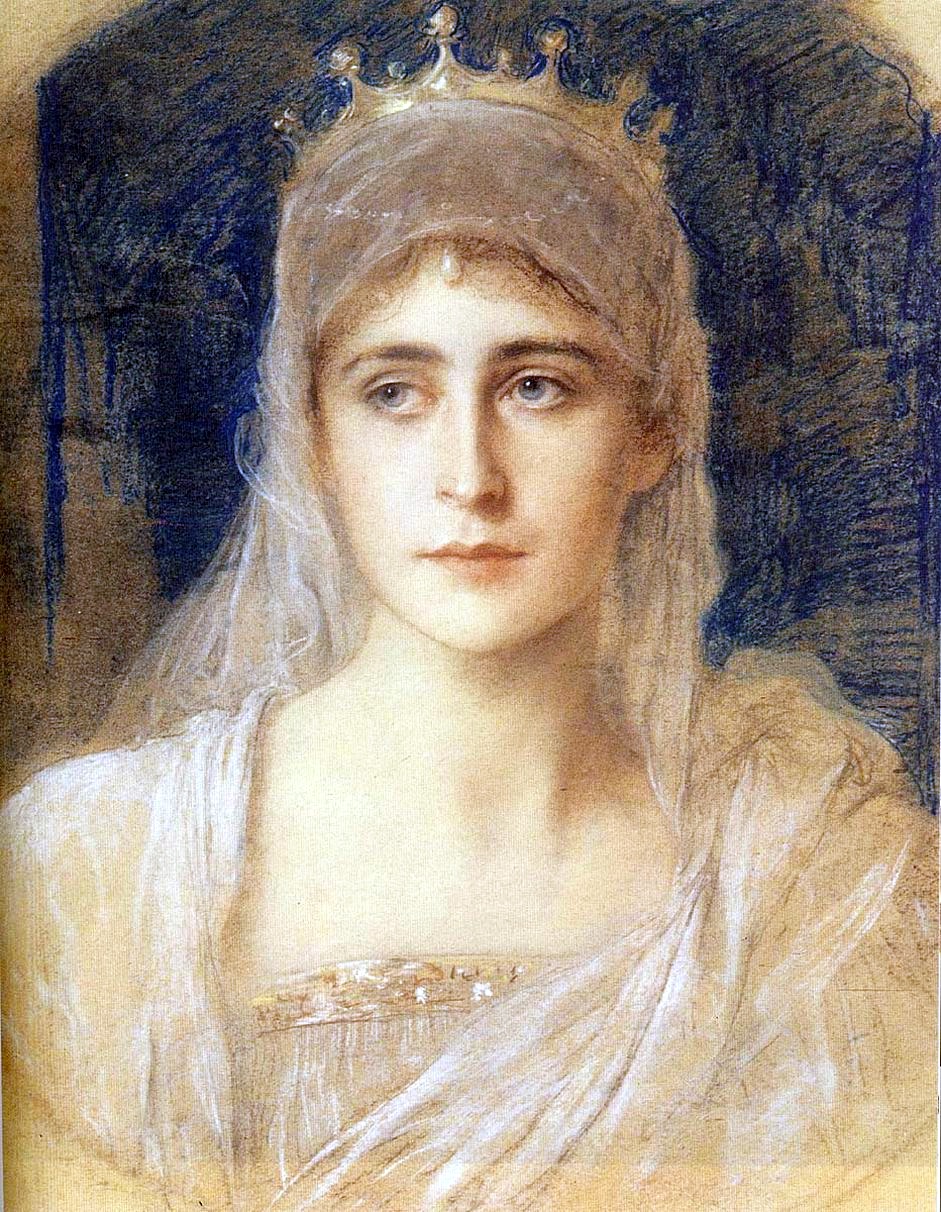 HIH The Grand Duchess Elizabeth Feodorovna of Russia (Elizabeth Feodorovna Romanova _ru. Елизавета Фëдоровна Романова), ( – ) was a German Princess of the , and the wife of , fifth son of Tsar and Princess Marie of Hesse and the Rhine. An older sister of Alexandra, the last Russian Empress, Elizabeth became famous in Russian society for her beauty, charm, and good works among the poor.

Grand Duchess Elizabeth was born HGDH Princess Elisabeth Alexandra Louise Alice of Hesse and the Rhine on . She was the second child of Grand Duke Ludwig IV of Hesse and the Rhine and British Princess Alice. Through her mother, she was a granddaughter of . Princess Alice chose the name "Elisabeth" for her daughter after visiting the shrine of , ancestress of the House of Hesse, in Marburg. Alice so admired St. Elizabeth that she decided to name her new daughter after her. Elizabeth was also called "Ella" within her family.

Though she came from one of the oldest and noblest houses in Germany, Elizabeth and her family lived a rather modest life by Royal standards. The children swept the floors and cleaned their own rooms, while their mother sewed dresses herself for the children. During the , Princess Alice often took Elizabeth with her while visiting wounded soldiers in a nearby hospital. In this relatively happy and secure environment, Elizabeth grew up surrounded by English domestic habits, and English became her first language. Later in life, she would tell a friend that, within her family, she and her siblings spoke English to their mother and German to their father.

In the autumn of 1878, swept through the Hesse household, killing Elizabeth's youngest sister, Marie on , as well as her mother Alice on . Elizabeth had been sent away to her paternal grandmother's home at the beginning of the outbreak and she was the only member of her family to remain unaffected. When she was finally allowed to return home, she described the meeting as "terribly sad" and said that everything was "like a horrible dream". Fact|date=December 2007

Charming and with a very accommodating personality, Elizabeth was considered by many historians and contemporaries to be one of the most beautiful women in Europe at that time. As a young woman, she caught the eye of her elder cousin, the future German Emperor William II. He was a student then at Bonn University, and on weekends he often visited his Aunt Alice and his Hessian relatives. During these frequent visits, he fell in love with Elizabeth, writing numerous love poems and regularly sending them to her. Flattered as she may have been by his attentions, Elizabeth was not attracted to William. She politely rejected him, and his resulting frustration caused him to give up his studies and return to Berlin.

Besides William II, she had many other admirers, among them Lord Charles Montagu, the second son of the 7th Duke of Manchester, and , later a distinguished soldier.

Yet another of Elizabeth's suitors was the future , William's first cousin. Queen Victoria described him as "so good and steady", with "such a safe and happy position," that when Elizabeth refused him the Queen "deeply regretted it". Frederick's grandmother, the Empress Augusta, was so furious at Elizabeth's rejection of Frederick that it took some time for her to forgive Elizabeth.

*Elizabeth's husband's cousin, Grand Duke Konstantin Konstantinovich (the poet KR). He wrote a poem about her first arrival in Russia, and the general impression she made to all the people present at the time.
* considered her a second mother, and stated in his memoirs that she helped him greatly during the most difficult moments of his life.
*As a young girl, was very fascinated with her Cousin Ella, and would later describe her beauty and sweetness in her memoirs as "a thing of dreams".
*The French Ambassador to the Russian court, , wrote in his memoirs how Elizabeth was capable of arousing what he described as "profane passions".

But it was a Russian Grand Duke who ultimately won Elizabeth's heart. Elizabeth’s great-aunt, , was a frequent visitor to Hesse. During these visits, she was usually accompanied by her youngest sons, Sergei and Paul. Elizabeth had known the boys since they were children, and she initially viewed them as haughty and reserved. Sergei, especially, was a very serious young man, intensely religious, and he found himself attracted to Elizabeth after seeing her as a young woman for the first time in several years.

At first, Sergei made little impression on Elizabeth. But after the death of both of Sergei’s parents within the same year, the shock of his loss caused Elizabeth to gradually see Sergei “in a new light”. She had felt this same grief after the death of her mother, and their other similarities (both were artistic and religious) began to draw them closer together. It was said that Sergei was especially attached to Elizabeth because she had the same character as his beloved mother. So when Sergei proposed to her for the second time, she accepted--much to the chagrin of her grandmother Queen Victoria.

Sergei and Elizabeth married on , at the Chapel of the in St. Petersburg. She became Grand Duchess "Elizabeth Feodorovna". The new Grand Duchess made a good first impression on her husband’s family and the Russian people. “Everyone fell in love with her from the moment she came to Russia from her beloved Darmstadt”, wrote one of Sergei's cousins. The couple settled in the in St. Petersburg; after Sergei was appointed Governor-General of Moscow in 1892, they resided in one of the palaces. During the summer, they stayed at , an estate outside Moscow that Sergei had inherited from his mother.

The couple never had children of their own, but their Il’yinskoye estate was usually filled with parties that Elizabeth organized especially for children. They eventually became the foster parents of Grand Duke Dmitri Pavlovich and Grand Duchess Maria Pavlovna, Sergei’s niece and nephew.

Although Elizabeth was not legally required to convert to from her native religion, she voluntarily chose to do so in 1891. Although some members of her family questioned her motives, her conversion appears to have been sincere.

On , , Sergei was assassinated in the by the Socialist-Revolutionary, . The event came as a terrible shock to Elizabeth, but she never lost her calm. Her niece Marie later recalled that her aunt’s face was “pale and stricken rigid” and she would never forget her expression of infinite sadness. In her rooms, said Marie, Elizabeth “let herself fall weakly into an armchair...her eyes dry and with the same peculiar fixity of gaze, she looked straight into space, and said nothing.” As visitors came and went, she looked without ever seeming to see them. Throughout the day of her husband's murder, Elizabeth refused to cry. But Marie recalled how her aunt slowly abandoned her rigid self-control, finally breaking down into sobs. Many of her family and friends feared that she would suffer a nervous breakdown, but she quickly recovered her equanimity.

Elizabeth personally visited Kalyayev in his jail cell, asking him to consider the gravity of his deed and repent. Later, she asked her brother-in-law, , to forgive her husband's assassin, but the revolutionary refused to accept a pardon and accused Elizabeth of misrepresenting his conversation with her. Kalyayev was hanged on , .

After Sergei’s death, Elizabeth wore mourning clothes and became a vegetarian. In 1909, she gave away her magnificent collection of jewels and sold her other luxurious possessions; even her wedding ring was not spared. With the proceeds she opened the Convent of Sts. Martha and Mary and became its . She soon opened a hospital, a chapel, a pharmacy and an orphanage on its grounds. Elizabeth and her nuns worked tirelessly among the poor and the sick of Moscow. She often visited Moscow’s worst slums and did all she could to help alleviate the suffering of the poor.

For many years, Elizabeth's institution helped the poor and the orphans in by fostering the prayer and charity of devout women.Here, there arose a new vision of a for women, one that combined intercession and action in the heart of a disordered world. Although the Orthodox Church rejected her idea of a female diaconate, it did bless and encourage Elizabeth's many charitable efforts.

In 1918, Lenin ordered the notorious to arrest Elizabeth. They then exiled her first to , then to , where she spent a few days and was joined by others: the Romanov; Princes Ioann Konstantinovich, Konstantin Konstantinovich, Igor Konstantinovich and Vladimir Pavlovich Paley; Grand Duke Sergei's secretary, Feodor Remez; and , a sister from the Grand Duchess's convent. They were all taken to on , , where they were housed in the Napolnaya School on the outskirts of the town.

At noon on , Cheka Officer Petr Startsev and a few Bolshevik workers came to the school. They took from the prisoners whatever money they had left and announced that they would be transferred that night to the Upper Siniachikhensky factory compound. The Red Army guards were told to leave and Cheka men replaced them. That night the prisoners were woken and driven in carts on a road leading to the village of Siniachikha. Some 18 kilometres from Alapaevsk there was an abandoned iron mine with a pit, twenty metres deep. Here they halted. The Cheka beat all the prisoners before throwing their victims into this pit, Elizabeth being the first. Hand grenades were then hurled down the shaft, but only one victim, Feodor Remez, died as a result of the grenades.

According to the personal account of Ryabov, one of their killers, Elizabeth and the others survived the initial fall into the mine, prompting Ryabov to toss in a grenade after them. Following the explosion, he claimed to hear Elizabeth and the others singing a Russian hymn from the bottom of the shaft. [ [http://www.serfes.org/lives/grandduchess/murder.htm Murder of the Grand Duchess Elizabeth ] at www.serfes.org] Unnerved, Ryabov threw down a second grenade, but the singing continued. Finally a large quantity of brushwood was shoved into the opening and set alight, upon which Ryabov posted a guard over the site and departed.

Early on , the head of the Alapaevsk Cheka, Abramov, and the head of the Yekaterinburg Regional Soviet, Beloborodov, who had been involved in the murders of the Imperial Family, exchanged a number of telegrams in a pre-arranged plan saying that the school had been attacked by an "unidentified gang". A short time later, Alapaevsk fell to the .

On , , the Whites discovered the remains of Elizabeth and her companions, still within the shaft where they had been murdered. Elizabeth had died of wounds sustained in her fall into the mine, but had still found strength to bandage the head of the dying Prince Ioann. Her remains were removed and ultimately taken to , where they lie today in the .

Elizabeth was glorified (canonized) by the in 1981, and by the inside Russia in 1992 as "New-Martyr Elizabeth". Her principal s are the she founded in , and the St. Mary Magdalene Convent on the Mount of Olives, which she and her husband helped build, and where her s (along with the Nun Barbara) are enshrined. She is one of the ten 20th-century martyrs from across the world who are depicted in statues above the Great West Door of , , England.

A statue of Elizabeth was erected in the garden of her convent after the fall of Communism in Russia. Its inscription reads: "To the Grand Duchess Elizabeth Feodorovna: With Repentance." A photo of this statue may be seen at [http://forum.alexanderpalace.org/index.php?topic=1431.15] (may require scrolling down page).