Princess Alice of the United Kingdom

Princess Alice of the United Kingdom 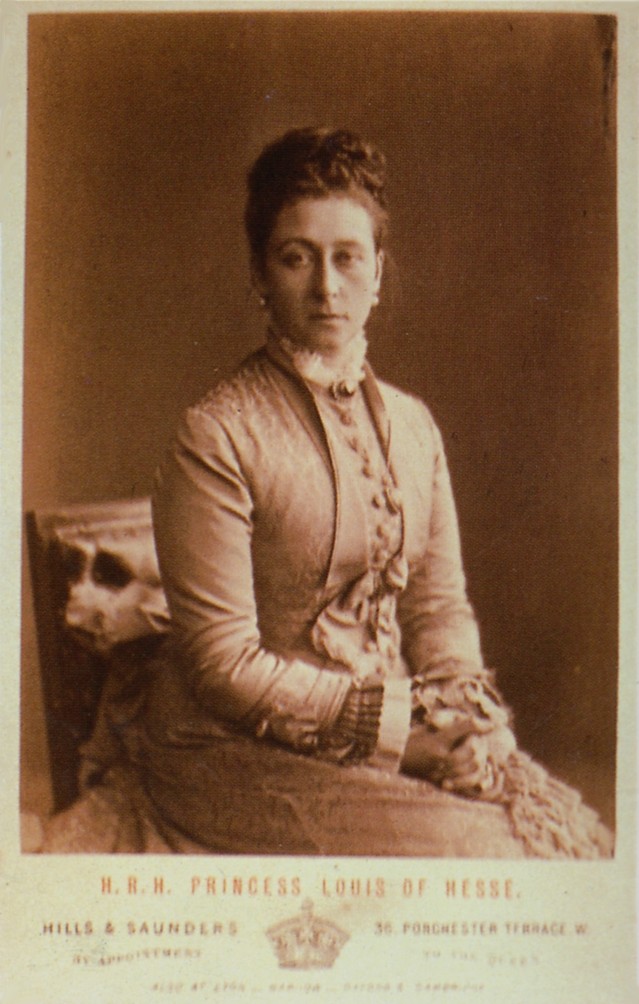 The Princess Alice (Alice Maud Mary; &ndash; ) was a member of the , the third child and second daughter of Queen Victoria. As the consort of Ludwig IV, Grand Duke of Hesse she was The Grand Duchess of Hesse.

Princess Alice was the great-grandmother of , the consort of Queen Elizabeth II.

Alice was born on 25 April 1843 at , . [Packard, p. 25] She was the second daughter and third child of the reigning British monarch, Queen Victoria, and her husband Prince Albert of Saxe-Coburg and Gotha. The name Alice was to honour Victoria's first Prime Minister, Lord Melbourne, who was still a passionate admirer of the Queen and who had once commented that the name “Alice” was his favourite female name.

Alice's birth prompted her parents to find a bigger family home. Buckingham Palace was not equipped with the private apartments that Victoria's growing family needed, including suitable nurseries. Therefore, in 1844, Victoria and Albert purchased on the as a family holiday home. Alice's education was devised by her father and his close friend, Baron Stockmar. At Osborne, Alice and her other siblings were taught practical skills such as housekeeping, cooking, gardening and carpentry. [Van der Kiste, p. 22] Victoria and Albert favoured a monarchy based on family values, and Alice and her siblings, who wore clothing on a daily basis, slept in sparsely furnished bedrooms with little heating. [Van der Kiste, p. 23] Alice was fascinated with the world outside the , and at Balmoral, where she seemed happiest, she visited the tenants living and working on the estate. On one occasion, she escaped from her at the chapel at and sat in a public pew, so she could better understand people who were not strict adherents to royal protocol. [Packard, p. 64] In 1854, during the , the eleven-year old Alice toured London hospitals for wounded soldiers with her mother and eldest sister. [Van der Kiste, p. 28] She was the most emotionally sensitive of her siblings and was sympathetic to other people's burdens, which was matched by a sharp tongue and an easily triggered temper. [Packard, p. 50]

Alice's compassion for other people's suffering established her role as the family caregiver in the year 1861. Her grandmother Victoria, Duchess of Kent, Queen Victoria's mother, died at Frogmore on 16 March 1861. Alice had spent much of her time at her grandmother's side, often played the piano for her in Frogmore's , and nursed her through the final illness.

Only a few months later, on 14 December 1861, Albert died at . During his final illness, Alice remained at his bedside. Alice sent for the Prince of Wales by telegram, without the knowledge of the Queen, who refused to notify him because she blamed him for Albert's death. [Magnus, p. 52] The Queen was distraught by her husband's death, and the court entered a period of intense mourning. [Zeepvat, p. 42] Alice became her mother's unofficial secretary, and through her passed the Queen's official papers to and from her government ministers. [Packard, p. 102] Alice was aided in this task by her younger sister Princess Louise. Although Princess Helena, Louise's elder sister, would normally have been selected, her inability to go long without crying made her an inappropriate choice.

On 1 July 1862, Princess Alice married Prince Louis of Hesse and by Rhine (12 September 1837-13 March 1892), the son of Prince Charles of Hesse and by Rhine and the nephew of and by Rhine (9 June 1806-13 June 1877), at on the . On the day of the wedding, Queen Victoria issued Letters Patent granting her new son-in-law the style "Royal Highness". This style was in effect in Great Britain, not Hesse.

Alice and Louis took up residence at , . The couple had seven children. It was later learned that Alice carried and passed on the gene she inherited from Queen Victoria to several of her own children.

Princess Alice's concern about the poor nursing conditions for wounded soldiers during the 1866 , led her to found the "Alice-Frauenverein", or Women's Union, to train nurses and auxiliary workers. She also helped found the Alice Hospital, which is still in operation in Darmstadt.

On 13 June 1877, Prince Louis succeeded his uncle as the reigning Grand Duke of Hesse and by Rhine and Princess Alice became the Grand Duchess. However, in November 1878, the Grand Duke and all but one of the children, Princess Elizabeth, fell ill with . Elizabeth was sent to live with relatives. Princess Marie died of the disease. Alice had, despite warnings from the physicians, hugged and kissed her one surviving son when she told him of Marie's death.

Exhausted by nursing all of them, Alice succumbed to the disease and died at the New Palace in Darmstadt on 14 December, the anniversary of her father's death. Alice is buried at Rosenhöhe, the mausoleum for the Grand Ducal House of Hesse outside Darmstadt. Prior to her death she spent a few weeks in , recuperating. In 1882 the was set up in the town in her honour. [The Illustrated London News, No.2254 — Vol. LXXXI, Saturday, July 15, 1882, p.66 (found at [http://www.londonancestor.com/newspaper/1882/0715/eastbourne-sussex.htm] )]

In 1858, Alice and her three younger sisters were granted use of the royal arms, with an inescutcheon of the shield of Saxony, and differenced by a label argent of three points. On Alice's arms, the outer points were ermine, and the centre bore a rose gules. [ [http://www.heraldica.org/topics/britain/cadency.htm Heraldica – British Royalty Cadency] ]