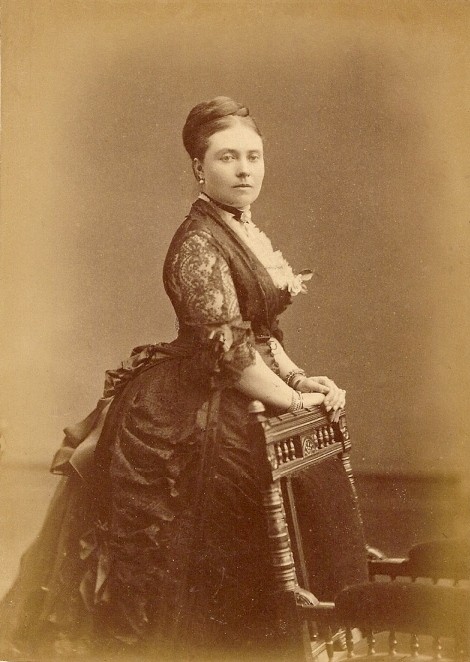 
The Princess Victoria, Princess Royal (Victoria Adelaide Mary Louisa) &ndash; ) was the eldest child and daughter of Queen Victoria and Prince Albert. She was created of the in 1841. She became German Empress and by marriage to German Emperor Frederick III. After her husband's death, she became widely known as Empress Frederick (or, in German: "Kaiserin Friedrich").

Princess Victoria was born on at , . Her mother was the reigning , , the only daughter of King George III's fourth eldest son, and Victoria, Duchess of Kent. Her father was . She was baptised in the Throne Room of Buckingham Palace on by The Archbishop of Canterbury, , and her godparents were her great-aunt Queen Adelaide, her great-uncle The King of the Belgians, her paternal grandfather The Duke of Saxe-Coburg and Gotha, her maternal great-uncle The Duke of Sussex, her maternal great-aunt The Duchess of Gloucester and her maternal grandmother The Duchess of Kent.

As a daughter of the sovereign, Victoria was automatically a with the style "Her Royal Highness", styled "HRH The Princess Victoria" (and in addition being heiress presumptive to the throne of the United Kingdom before the birth of her younger brother Prince Albert, later on ). In 1841, the Queen created Victoria , giving her an honorary title sometimes conferred on the eldest daughter of the sovereign. Victoria was then styled "HRH The Princess Royal". To her family she was known simply as "Vicky".

The education of Victoria was closely supervised by her parents. She was precocious and intelligent, unlike her brother Albert Edward. She was taught to read and write before the age of five by her governess Lady Lyttelton and to speak French by her French nursery maid. The Princess Royal learned French and German from various governesses, and science, literature, Latin, and history from Sara Ann Hildyard. Prince Albert tutored her in politics and philosophy.

In 1851, Victoria met her future husband, Prince Frederick William of Prussia ( – ), when he and his parents were invited to London by Queen Victoria and Prince Albert to attend the opening of the Great Exhibition. At the time, Frederick, the son of Prince William of Prussia and Princess Augusta of Saxe-Weimar, was second in line to the Prussian throne. The couple became engaged in 1855 while Frederick was on a visit to Balmoral; Victoria was just fourteen, while her future husband was a young man of twenty-four.

The Prussian Court and Buckingham Palace publicly announced the engagement on . Seventeen-year-old Victoria married Frederick, at Queen Victoria's insistence, at the , , on . The marriage was both a love match and a dynastic alliance. The Queen and Prince Albert hoped that Victoria's marriage to the future king of Prussia would cement close ties between London and , and possibly lead to the emergence of a unified and liberal Germany. At the time of their wedding, Londoners chanted "God save the Prince and Bride! God keep their lands allied!"

In January 1861, on the death of his childless uncle and the accession of his father as King William I, Prince Frederick became Crown Prince of Prussia, Victoria therefore became Crown Princess. The new Crown Prince and Crown Princess, however, were politically isolated; their liberal and Anglophile views clashed with the authoritarian rule of the Prussian minister-president, . Unfortunately, despite their efforts to educate their son, Wilhelm, in British attitudes of democracy, he favoured his German tutors in aspiring to autocratic rule and thus became alienated from his parents, suspecting them of putting Britain's interests first.

During the three Wars of &ndash; the 1864 Prussian-Danish War, the 1866 , and the 1870-71 &ndash; Victoria and Frederick strongly identified with the cause of Prussia and the . Their sympathies created a rift among Queen Victoria's extended family, since Victoria's younger brother, the Prince of Wales, was married to Princess Alexandra of Denmark, the elder daughter of , who was also reigning duke of the of and . At on , the victorious princes of the North German Confederation proclaimed a with King William I of Prussia as the hereditary German Emperor ("Deutscher Kaiser") with the style "Imperial and Royal Majesty (Kaiserliche und Königliche Majestät)"; Frederick and Victoria became German Crown Prince and German Crown Princess with the style "Imperial and Royal Highness (Kaiserliche und Königliche Hoheit)".

On the death of his father on , the Crown Prince ascended the throne as the Emperor Frederick III (and as King Frederick III of Prussia) and Victoria adopted the title and style of "Her Imperial and Royal Majesty" The German Empress, Queen of Prussia. Frederick, however, was terminally ill with throat cancer and died after reigning 99 days. From then on she was known simply as The Empress Frederick.

She was often known as "Die Engländerin" (the Englishwoman) due to her origins in the United Kingdom. Indeed, she continued to speak English in her German household.

The widowed Victoria lived in retirement at Castle Friedrichshof, a castle she had built in memory of her late husband in the hills near not far from . Politically, she remained a liberal in contrast with her son Emperor William II. Their relationship had earlier been difficult but improved once she was no longer in the limelight. In Berlin, Victoria established schools for the and for nurses' training. As a talented and gifted artist in her own right, she was a patron of the arts and learning, becoming one of the organizers of the .

Throughout her married life and widowhood, Victoria kept in close touch with other members of the , particularly her younger brother, the future King .

She maintained a regular correspondence with her mother. According to the "", some 3,777 letters from to her eldest daughter have been catalogued, as well as more than 4,000 from daughter to mother. Many of her letters detailed her concern over 's future under her son. At her request – in which she made explicit her concern that the letters, which she had had sent back to herself at Kronberg, ['The fact that she should have sent for these letters, looked through them, deleted passages, and finally have them sent back to England seems to point to her having contemplated their publication.' "Letters of the Empress Frederick" edited by Sir Frederick Ponsonby, London, Macmillan, 1928, p. xvi.] should not fall into the hands of her son William II and that he should not know what had happened to them – the letters were brought back to England in a cloak-and-dagger operation by Frederick Ponsonby, her godson, the private secretary of Edward VII, who was making his (Edward's) final visit to his terminally ill sister in Kronberg for a week up to 1 March 1901. These letters were later edited by Ponsonby and put into context by his background commentary to form the book that was published in 1928. [ The 'cloak-and-dagger operation', Ponsonby's position as her godson, and the background to his decision to publish the letters are described in "Letters of the Empress Frederick" on pp. ix–xix.]

Victoria was diagnosed with inoperable in 1899 during a visit to her mother at . Her servants and maids at her castle Friedrichshof asked to be moved further away from Vicky's room, so that the screams did not disturb them at night. By the autumn of 1900, the cancer spread to her spine and after much suffering, she died at Castle Friedrichshof on the , less than seven months after the death of her mother, . She was buried in the royal mausoleum of the Friedenskirche at on the . Her tomb has a recumbent marble effigy of herself on top. Next to her lies her beloved husband. Two of her eight children, Sigismund (died age 2) and Waldemar (died age 11) are also buried in the same mausoleum.

With her style of Princess Royal, Victoria was granted use of the royal arms, as then used: with an escutcheon of the shield of Saxony, the whole differenced by a label argent of three points, the outer points bearing crosses gules, the central a rose gules. [ [http://www.heraldica.org/topics/britain/cadency.htm Heraldica – British Royalty Cadency] . In 1917, the escutcheon was dropped by royal warrant from George V. Of course Victoria had died in 1901 and the arms had not been used by her since her marriage to Prince Friedrich Wilhelm of Prussia, later German Emperor Friedrich III.]

Victoria and Frederick had eight children: