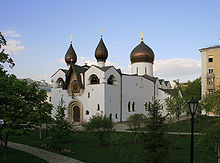 The Holy Protection Cathedral at the Martha and Mary Convent of Mercy.

The convent was founded in 1908 by Grand Duchess Elizabeth Feodorovna (sister of Alexandra Feodorovna, the last Empress of Russia—both of whom are counted among the Russian New Martyrs) to assist sick, wounded, and maimed soldiers in their recovery, and to provide for the needs of the poor and orphans.

Grand Duchess Elizabeth was the widow of Grand Duke Sergeii Alexandrovich, who had been assassinated by terrorists in 1905. After her husband's death, she gave away her magnificent collection of jewels, including her wedding ring, and sold her other possessions. With the proceeds she opened the Convent of Sts. Martha and Mary and became its abbess. Her vision was to begin a religious community, made up of women from all social strata, that would merge the ideals of saints Martha and Mary, dedicated both to prayer and to serving the needs of the poor. She purchased a tract of land in Moscow and constructed a hospital, an orphanage for girls, and quarters for the nuns. Working in conjunction with church authorities she developed the monastic rule and habit—which differed somewhat from the traditional habit of Orthodox nuns—that would be used at the convent. At its peak the convent housed 97 sisters and served 300 meals daily to the poor. 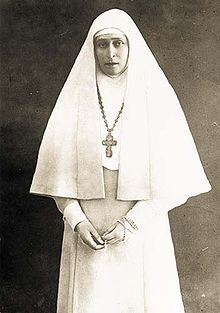 Grand Duchess Elizabeth wearing the monastic habit she designed for the convent.

In 1908-12, Aleksey Shchusev designed the Church of Saints Martha and Mary and the Holy Protection Cathedral, both structures being Art Nouveau renderings of a medieval Novgorod architectural type. The cathedral's snow-white walls are adorned with carved crosses by Sergey Konenkov. The interior contains frescoes and mosaics by Mikhail Nesterov and Pavel Korin.

Both of the churches at the convent were closed down by the Communist authorities in 1926 and the sisterhood was scattered. In 1990 a monument was erected on the convent grounds to Grand Duchess Elizabeth, who was glorified (canonized) by the Russian Orthodox Church (see Romanov sainthood). In 1992, the celebration of divine services was resumed in the Church of Martha and Mary, and in 1994 the sisterhood was reestablished.

In 1999 the Educational Center of Sts. Martha and Mary Convent of Mercy was founded, with the blessing of Patriarch Alexy II of Moscow and All Russia, for the purpose of training Orthodox girls as certified nurses.

Princess Alice of Battenberg founded a nursing order of Greek Orthodox nuns, the "Christian Sisterhood of Martha and Mary", modeled after the Marfo-Mariinsky Convent that her aunt had founded in Russia. However, the order eventually failed through a lack of suitable applicants.

In 2002, HRH Prince Charles commissioned British composer and convert to the Russian Orthodox Church, John Tavener, to write a choral piece in memory of his grandmother, Queen Elizabeth the Queen Mother. The work was entitled, Elizabeth Full of Grace, and celebrates the life, death and glorification of Saint Elizabeth the Grand Duchess. Premiered at St George's Chapel, Windsor Castle on 28 February 2003 by Valery Gergiev and the Mariinsky Chorus and Orchestra, proceeds from the performance went to benefit the charitable work of the Saints Martha and Mary Convent of Mercy.

The gates of the convent.