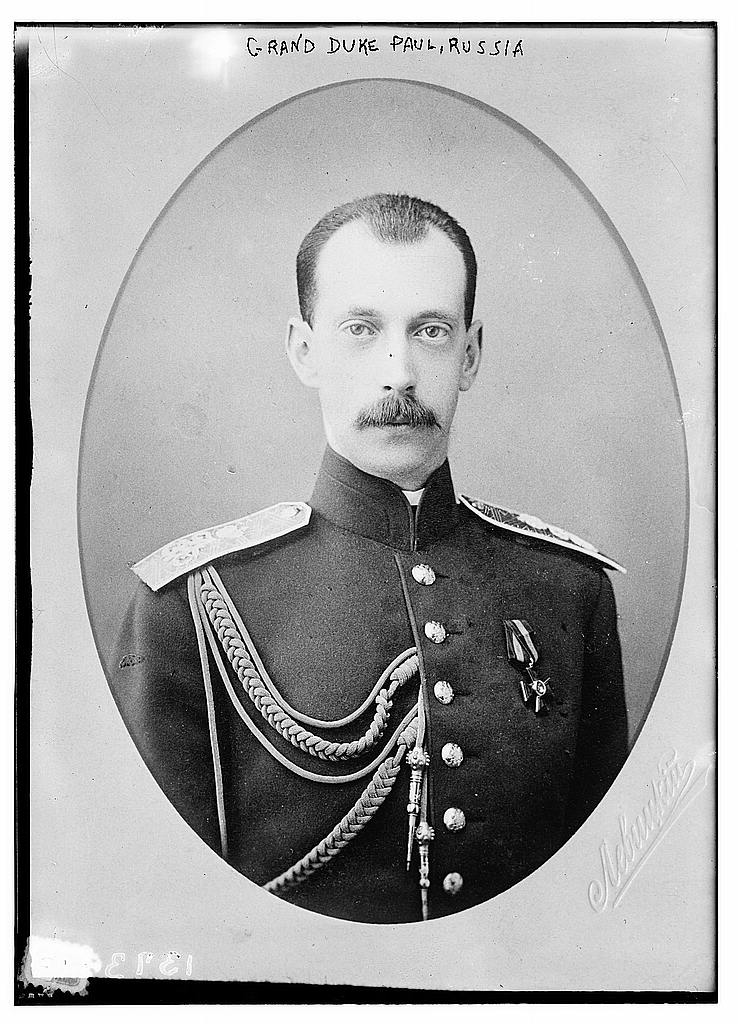 Grand Duke Pavel Alexandrovich of Russia (Павел Александрович) (October 3, 1860 N.S.–January 24, 1919 N.S.) was the eighth child of Tsar by his first wife Empress Maria Alexandrovna. His birth was commemorated by the naming of the city of in . He entered the Russian Army and rose to the rank of General, but was known as a gentle person, religious and accessible to people.

On , in , he married Princess Alexandra of Greece, who bore him two children:
* Grand Duchess Maria Pavlovna of Russia b.
* Grand Duke Dmitri Pavlovich of Russia b.

Alexandra died just hours after Dmitri's birth. She had carelessly stepped into a waiting boat, causing premature labor; Dimitri was born in the hours following the accident. Alexandra slipped into a coma and never came out.

In 1893, the young widower became close to a commoner, Olga Valerianovna Karnovich, and years later requested Nicholas II's permission to marry her, but it was refused, and the couple settled in Paris. On they were married in an Orthodox church in , . The n government granted Olga the title of Countess of Hohenfelsen in 1904, but the marriage caused a scandal in the Russian Court. Paul was dismissed of his military commissions, all his properties were seized, and his brother Grand Duke Sergei was appointed guardian of Maria and Dmitri.

For many years, he lived in exile in with Olga and the three children they had: Vladimir, who became a remarkable poet, and two girls, Irina and Natalia. Eventually he was pardoned and settled with his family in Tsarskoe Selo. In 1915 the Tsar granted Olga and their children the title of Prince and Princesses with the style of Serene Highness, and their children also became Prince Vladimir Pavlovich Paley and Princesses Irina Pavlovna and Natalia Pavlovna Paley.

During he was placed in command of the First Corps of the and later was moved to a new appointment at the Tsar's headquarters. In 1917 he tried to convince the sovereigns to grant a Constitution, but his efforts failed. However, he was one of the few members of the Imperial Family who remained quite close to Empress Alexandra Fyodorovna during the final days of the old régime.

After the Bolsheviks seized power, he and his family faced a terrible ordeal. Their properties were confiscated, they lived under constant harassment, and in March 1918 his son was exiled to the Urals, where he was to be executed on in a mineshaft near Alapayevsk.

In August, 1918, he was arrested and taken to prison in . His health, already bad, declined sharply, and his wife did all she could to have him released. Her efforts were useless: on , Paul was moved to , and in the first hours of the following day he was shot there, along with his cousins Grand Dukes Dimitry Konstantinovich, Nikolay Mikhailovich and Georgy Mikhailovich.

They were buried in a mass grave in the Fortress, the Bolsheviks having refused the distraught Princess Paley the right to bury her husband. His body has never been found.