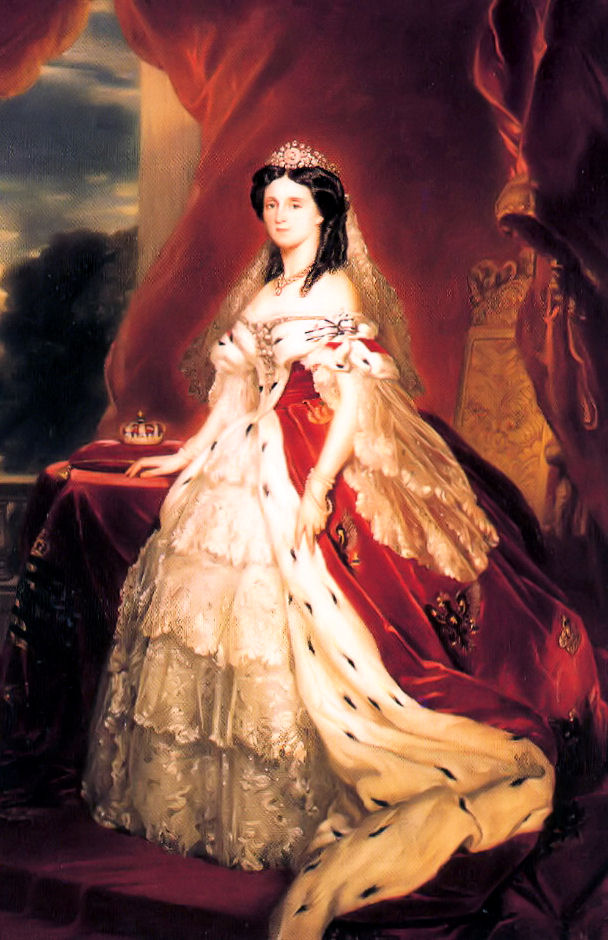 Princess Augusta Louisa Katherine of Saxe-Weimar and Eisenach, Duchess in Saxony ("Augusta Marie Luise Katharina von Sachsen-Weimar-Eisenach") ( &ndash; ), later the Queen of Prussia and the first German Empress, was the consort of .

While her father was an intellectually limited person, whose preferred reading up to the end of his life was fairy tales, spoke of Augusta's mother Marie as "one of the best and most significant women of her time." Augusta received a comprehensive education, including drawing lessons from the court painter, , as well as music lessons from the court bandmaster, .

Augusta was only fifteen years old, when in 1826, she and her future husband met. Wilhelm thought of the young Augusta as having an "excellent personality," yet was less attractive than her older sister Marie (whom Wilhelm's younger brother, Karl, had already married). Above all, it was Wilhelm's father who pressed him to consider Augusta as a potential wife.

At the time, Wilhelm was in love with the Polish princess, . The crown prince at the time was Wilhelm's elder brother, Crown Prince Friedrich Wilhelm (later King Friedrich Wilhelm IV), however, he and his wife Elisabeth had as yet had no children. Wilhelm was thus to the throne and expected to marry and produce further heirs. Friederich Wilhelm III was fond of the relationship between Wilhelm and Elisa, but the Prussian court had discovered that her ancestors had bought their princely title from and she was not deemed noble enough to marry the heir to the Prussian throne. So, in 1824, the King turned to childless to adopt Elisa, but the Russian ruler declined. The second adoption plan by Elisa's uncle, , likewise failed, because the responsible committee considered that adoption does not change "the blood." Another factor was the Mecklenburg relations of the decease Queen Louise's influence in the German and Russian courts (she was not fond of Elisa's father).

Thus, in June 1826, Wilhelm's father felt forced to demand the renunciation of a potential marriage to Elisa. Thus, Wilhelm spent the next few months looking for a more suitable bride, but did not relinquish his emotional ties to Elisa. Eventually, Wilhelm asked for Augusta's hand in marriage on (in writing and through the intervention of his father). Augusta happily agreed and on , , they were engaged. Wilhelm saw Elisa for the last time in 1829. Elisa was later engaged to , but the engagement failed and she died, unmarried, in 1834, of .

Historian Karin Feuerstein-Prasser has pointed out on the basis of evaluations of the correspondence between both fiancées, what different expectations Wilhelm had of both marriages: Wilhelm wrote to his sister Charlotte, the wife of , with reference to Elisa Radziwill: "One can love only once in life, really" and confessed with regard to Augusta, that "the princess is nice and clever, but she leaves me cold." Augusta was in love with her future husband and hoped for a happy marriage, but the unhappy relationship between Wilhelm and Augusta was known to Elisa Radziwill, and she believed herself to be a suitable substitute for him.

On , , after a strenuous 3-day trip from Weimar to , Wilhelm married his fiancée, fourteen years younger than him, in the chapel of .

The first weeks of marriage were harmonious; Augusta was taken favorably in the Prussian king's court, however, Augusta soon started to be bored with its military sobriety, and most courtly duties (which may have counteracted this boredom) were reserved to her sister-in-law, Crown Princess Elisabeth.

In a letter which Wilhelm wrote on , to his sister Charlotte, he complained of his wife's "lack of femininity". That aside, their first child, Prince Friedrich (later Friedrich III of Germany), was born later that year on , , three years after their marriage and their second child, Louise, was born on , , seven years later. Augusta later had two miscarriages in 1842 and 1843. She had also gone through manic-depressive phases since 1840; she felt unwanted due to Wilhelm having mistresses and suffered from the huge pressure under which she stood.

Augusta was very interested in politics and like so many other liberally-minded people of the time, she was hopeful about the accession of Friedrich Wilhelm IV, her brother-in-law, who was regarded as a modern and open king. However, the king refused to grant a constitution to Germany and led a far more conservative government, unlike his liberal ideals during his years as crown prince. A "United " was created by the king in reaction to the crop failures and hunger revolts of 1847, but was soon dissolved a few months later. Prince Wilhelm was held responsible for the bloodshed of the March revolution in 1848, in and on the advice of the king, Wilhelm fled to and Augusta withdrew to with their two children.

In liberal circles, an idea was seriously discussed on whether or not to force the king to abdicate, the crown prince renounce his rights to the throne and instead have Augusta take up a regency for their son. Because the letters and diaries of that time were later destroyed by Augusta, it is not clear whether she seriously considered this option. After, in May 1848, 800 members of the German met in the to discuss German unification and Prince Wilhelm returned from London the following month. A year later, in 1849, he was appointed Governor-General of the Rhine Province and in the spring of 1850, he and Augusta took up residence in .

Augusta enjoyed life in Koblenz and it was here that she could finally live out court life as she was accustomed to during her childhood in . Meanwhile, their son Friedrich studied nearby in and became the first Prussian prince to receive an academic education.

Koblenz was subsequently visited by many liberal-minded contemporaries, including the historian and legal professors , and . Critically, Augusta's tolerance towards at Koblenz (and throughout her lifetime) was scorned at in Berlin and was felt inappropriate of a Prussian Protestant princess.

In 1856, Augusta's and Wilhelm's only daughter, Princess Louise (then 17), married and in 1858, their son Friedrich married the Princess Victoria of the United Kingdom, Queen Victoria's eldest child. Augusta saw this as a personal triumph and hoped her new daughter-in-law's upbringing in a contemporary country like the would guide Friederich in the direction of a liberal monarchy at home.

In 1858, Wilhelm became regent after his brother was no longer able to lead his government due to suffering several strokes and he and his wife travelled to the court at Berlin.

Wilhelm soon dismissed the old ministry when he succeeded his childless brother as king in 1861 and appointed liberal ministers of his own, notably from his own court at Koblenz, inlcluding: Alexander von Schleinitz, who became Foreign Secretary; August von Bethmann, who became Minister of Culture; and who became . The conservative opponents saw this as the work of Augusta, but her political influence on Wilhelm was rather low. This became evident a few months later, when he dissolved parliament, which was not bending to his will and the king appointed as the new Prussian Prime Minister. Augusta, now Queen, regarded Bismarck as her mortal enemy and Bismarck likewise despised Augusta for her (albeit low) influence on her husband.

Augusta was particularly horrified at Bismarck's foreign policy and his cause in the commencement of the . At the same time she become more and more estranged from the King and Bismarck began to comment negitavely on the queen in parliament; the Queen reacted by being rude to Bismarck's wife, Johanna.

The Queen soon began to suffer from her manic-depressive phases again and started making frequent trips to , in search of a cure. At this time, the Prussian population was rejoicing in the victory at Königgrätz, but Augusta began mourning for the dead and injured. Augusta also became estranged from her daughter-in-law, Vicky, who began to sympathise with the Prussian cause and Bismarck's policies. The religious and distinctively dutiful Augusta felt Victoria to be "without religion," scorned at her occasional absenteeism from official occasions, but began to take an interest in the upbringing of her grandson, Wilhelm, and held him in high esteem.

Augusta, who clearly abhorred war, founded the National Women's Association in 1864, which looked after wounded and ill soldiers and convened with for ideas. Several hospital foundations exist today from Augusta's initiative, including the .

The Austro-Prussian War soon ended in 1866 but four years later, the started in 1870 and Augusta continued to hold Bismarck personally responsible. However, the aftermath of the war left Wilhelm as German Emperor and thus, Augusta, as German Empress.

Augusta felt the Imperial Crown a personal defeat; she wanted the Prussian supremacy in Germany to succeed by "moral conquest" and not by bloodshed. Her opinion of the war was established by erecting an educational establishment in in 1872, as "a home for the education of destitute daughters of German officers, military officials, priests and doctors from the field of honour as a result of the war of 1870/71."

Augusta buried her indifferences with Bismarck only in her last years as it seemed he was the only suitable man to support her beloved grandson, Wilhelm. However, Wilhelm disliked Bismarck and soon forced him to resign during the first few years of Wilhelm's reign.

Augusta had suffered from for many years and in June 1881, she received heavy injuries from a fall which left her dependent on es and a , but this did not hinder her from fulfilling her duties.

She finally made amends with her husband on his ninetieth birthday in 1887, but he soon died a year later. Only ninety-nine days later, her son, who had succeeded to the throne as Friedrich III, succumbed to . She did, however, see her beloved grandson Wilhelm become king and emperor that year, but died a year later on , , aged 78. Augusta was buried in the mausoleum of beside her husband.