Dawlish railway station is on the Exeter to Plymouth line and serves the town of Dawlish in Devon, England. The station and line is built on the sea wall, and has often suffered from storm damage due its proximity to the sea. South of the station the line passes through five tunnels through the cliffs as it follows the coast.

The station was opened by the South Devon Railway on 30 May 1846.[1] The strange wall with bricked up windows that can be seen in the car park is the remains of the engine house that used to power the trains while they were worked by atmospheric power from 13 September 1847 until 9 September 1848. At this time it was one of Isambard Kingdom Brunel's 7 ft 0 1⁄4 in (2,140 mm) broad gauge railways.

The station initially had just one platform on the landward side with a loop line closer to the sea, but a second platform was added to serve the loop line on 1 May 1858. The original wooden station and train shed was burnt down on 14 August 1873 and the present buildings opened to replace it on 12 April 1875. The platforms have been extended several times to cope with the crowds and now reach all the way to Coastguards' Footbridge, although the Exeter platform was shortened again in 1970.[2]

The South Devon Railway was amalgamated into the Great Western Railway on 1 February 1876, and on 20 May 1892 the line was converted to 4 ft 8 1⁄2 in (1,435 mm) standard gauge. The Great Western in turn was nationalised into British Railways on 1 January 1948.

The decorative iron and glass canopies above the platforms were replaced by concrete beams and glass panels in 1961 but the glass has since been replaced by Perspex.[3] Goods traffic was withdrawn on 17 May 1965. 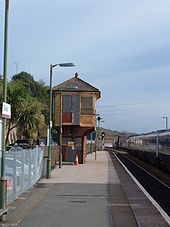 The first signal box was provided on the seaward platform beside the north end of the waiting room but this was replaced by a new two-storey signal box on 9 September 1920 on the opposite platform. So as to fit on the narrow platform the brick-built lower storey which contained the interlocking equipment was narrower than usual, with the upper storey was vaulted out from this to give a full size operating floor.

After the summer of 1970 the signal box was only opened on summer weekends or if there were problems working along the sea wall. It finally closed on 27 September 1986 since when the trains have been controlled from Exeter, but the distinctive structure remains on the platform.[2]

On 22 September 1921 a Plymouth to Crewe passenger train collided with an Exeter St Davids to Newton Abbot goods train which was shunting in the station. The passenger train, hauled by Star Class 4055 Princess Sophia, failed to stop at a danger signal. Cranes cleared the line by lifting damaged wagons onto the beach where they remained for a couple of days.[2] 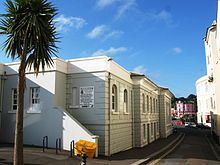 The station is adjacent to the beach near the gardens at the centre of the town. The main frontage is in banded rusticated masonry. The remaining walls are rendered except for the east elevation, which faces the sea, which is in rubble stone. It has two storeys as the railway runs above street level and a café occupies most of the street frontage.[3] The main entrance is at road level on the side served by trains to Exeter. This opens onto a booking office with an ornate ceiling[2] from where a flight of stairs lead up to the Exeter platform, but step-free access can be obtained through a gate from the car park beside the station buildings, which is only access route when the booking office is closed.

Access to the opposite platform is by way of a covered footbridge, the stairways of which are contained within the building. Passengers who cannot use the steps can be escorted across the barrow crossing at the south end of the station by the station staff.

Immediately to the south of the station is the low Colonnade Viaduct, which carries the railway above the small river that runs through the gardens and the main footpath from the town to the beach and the South West Coast Path. To the north of the station is Coastguards Footbridge, with Coastguards Cottage, now a café, on the hill above the line to the west, and Brunel's Boat House between the line and the beach to the east.

Dawlish is served by First Great Western local trains in both directions on an approximately hourly basis during the day - more frequent at peak times. Most trains run between Exmouth and Paignton; on Sundays the service is less frequent and most trains only run between Exeter St Davids and Paignton.[4] The line from Exeter St Davids through Dawlish to Paignton is marketed as the "Riviera Line".

A few First Great Western trains from Bristol or from London Paddington station also call at Dawlish.[5] and CrossCountry services from the North of England.[6] Most of these services, including the Torbay Express from Paddington, continue to Paignton but a few run instead to Plymouth and even Penzance. At other times passengers travelling east or north catch a local train and change into main line trains at Exeter St Davids, or at Newton Abbot if travelling westwards.