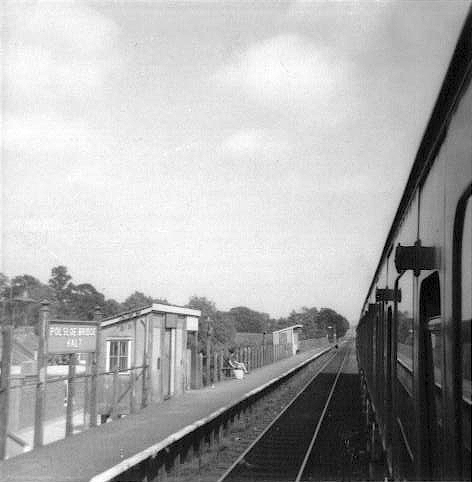 Polsloe Bridge railway station is a suburban in , , .

The station was opened in 1907 to serve the eastern suburbs of Exeter. [cite book |last = Mitchell |first = Vic|coauthors = Smith, Keith |title = Branch Lines to Exmouth |publisher = Middleton Press |date = 1992 |location = Midhurst|id = ISBN 1-873793-00-6] It was situated just a short distance along the branch and was convenient for which was on the opposite side of the main line.

The platforms were rebuilt in 1927 using concrete components cast at the concrete workshop that had been established at Exmouth Junction. On the branch was singled and the down platform taken out of use.

Private goods sidings were provided on the west side of the line on both sides of the station. Between the platform and the junction was a siding to a brickworks, while a little to the south was Newcourt, a military depot.

It has one platform &ndash; on the right of trains arriving from Exeter &ndash; situated on an embankment above Pinhoe Road. The platform is particularly narrow, and the only access to the station is via a number of steps. The station is intended to serve the Mount Pleasant, Hamlin and Whipton areas of the city.

About half the trains on the from Exmouth to Exeter St Davids call at Polsloe Bridge. Beyond St Davids they generally continue to either Paignton or Barnstaple. Connections are available at Exeter Central for Pinhoe and stations to Waterloo; passengers for other main line stations change at Exeter St Davids.