It is the current junction of the Tarka and Dartmoor lines, though the two lines run parallel until Coleford Junction (where the junction of the Barnstaple and Okehampton lines used to be) at Penstone near Coleford (west of Yeoford). 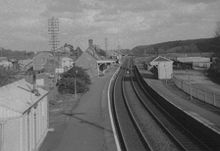 The station, designed by Isambard Kingdom Brunel, was opened by the Exeter and Crediton Railway on 12 May 1851. The line to Barnstaple was then opened by the North Devon Railway on 1 August 1854. After 1 November 1865 additional London and South Western Railway trains ran through the station going towards Okehampton.[1]

The signal box which controls the level crossing was put into use on the 2 June 1875, and the footbridge built in 1878. It now controls the entire Tarka Line from just north of the Cowley Bridge Junction with the Bristol to Exeter line, all the way to Barnstaple, although most of the line uses the No Signalman Token Remote (NSTR) system. Under this method of operation only a single train is allowed into each section, so not much signal control is actually required.[1]

Crediton is served by all trains on the Barnstaple to Exmouth service. They connect with main line services at Exeter St Davids.[2]

The railway between Exeter and Barnstaple is designated as a community railway and is supported by marketing provided by the Devon and Cornwall Rail Partnership. The line is promoted under the Tarka Line name.

The main station building is the award-winning Tea Rooms. These appeared in a list of "highly commended" station cafes published in The Guardian in 2009.[3] The tea rooms house a 0 gauge static model of the station in LSWR days and displays about the railway locally.

The Friends of Crediton Station actively promote the station and have been involved in schemes such as planting flower beds.

In 2007, working with the Friends of Crediton Station, First Great Western painted the station in authentic LSWR colours.