/ˈdɔːlɪʃ/) is a town and civil parish in Teignbridge on the south coast of Devon in England, 12 miles (19 km) from the county town of Exeter. It has a population of 12,819.[1] During the 18th century, it grew from a small fishing port to become a well-known seaside resort.

Dawlish is located at the outlet of a small river, Dawlish Water (also called The Brook), between Permian red sandstone cliffs, and is fronted by a sandy beach with the South Devon Railway sea wall and the Riviera Line railway above. Behind this is a central public park, The Lawn, through which Dawlish Water flows.

Immediately to the south-west of Dawlish is a headland, Lea Mount, with Boat Cove at its foot and Coryton Cove, the furthest part of the beach accessible by the seawall path, behind it. To the north-east, via the beach or seawall, the coast can be followed some 2 km to Langstone Rock and the resort of Dawlish Warren beyond.

Dawlish is also known for its black swans (Cygnus atratus), introduced from Western Australia, which live with other exotic waterfowl in a small urban sanctuary on Dawlish Water.[2] 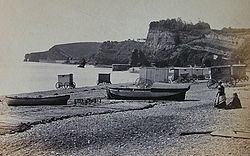 The people who first settled in Dawlish (or first known as deawlisc, or devil water) lived on the higher grounds. These were fishermen and salt makers who ventured down to the coast to net fish and gather salt. Salt was abundant in rock pools and salterns were constructed to dry brine and produce salt. The high-quality salt was stored in sheds or saltcellars. Dawlish produced less salt than its neighbour Teignmouth, most likely due to inhabitants being wary of Dawlish water and its unpredictability when it came to flooding.

Dawlish took its name from a stream with a Brythonic name, once spelt "Deawlisc", meaning "Devil Water" (the name came from heavy rains churning up the red cliffs, making the brook run red). An alternative meaning proposed is "black stream", cognate with Welsh du (g)lais. Several other spellings and meanings are found later in the Domesday Book and in documents from Exeter Cathedral.

The salt making started before Roman times (55 BC) and continued until the withdrawal of the Romans in AD 400. In the Anglo-Saxon period (AD 400–1000) salt making ceased, however Teignmouth continued production. During the Anglo-Saxon period the number of inhabitants grew and some communities settled in the upper part of the valley where floods were less common and the land was fertile. Evidence of early farming settlements is found at Aller Farm, Smallacombe, Lidwell and Higher and Lower Southwood.

When the Romans invaded Britain, the Celtic population of Devon was not displaced and continued to occupy the land throughout the period that lasted until the Anglo-Saxons arrived. The Anglo-Saxons conquered Devon and it was annexed by the kingdom of Wessex in the 8th century.[citation needed]

The Danish invasion of AD 800 left Dawlish untouched, possibly due to the shallow sea waters and marshland. Bishopsteignton was destroyed by the Danes in AD 1001[citation needed] along with settlements at the mouth of the River Teign.

Until its sale in the 19th century, Dawlish belonged to Exeter Cathedral, having been given to the chapter by Leofric, Bishop of Exeter in 1050.[citation needed]

Dawlish was once the haunt of Charles Dickens and Jane Austen. Charles Dickens used the town as the birthplace of Nicholas Nickleby. The town particularly around the seafront, has much in common with the resort towns in South Devon, a classic of Regency and early Victorian style. Also worth noting are Manor House and Brook House (both about 1800) and some of the cottages in Old Town Street surviving from the old village. Dawlish's transformation from a fishing settlement to a watering hole for Victorian celebrities can be discovered at the Dawlish Museum.

The arrival of the railway 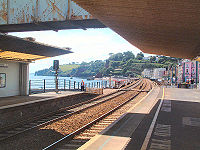 View from Dawlish station to the south-west toward the scenic tunnelled coastal section of line.

Dawlish grew with the coming of the railway. In 1830, Isambard Kingdom Brunel designed a railway, which operated on a pneumatic principle[3] using a 15-inch iron tube. The atmospheric railway opened on 30 May 1846 and ran between Exeter St. Davids and Newton Abbot. There were pumping stations at Exeter St. Davids, Countess Weir, The Turf, Starcross (where the old pump house can still be seen), Dawlish, Teignmouth, Bishopsteignton and Newton Abbot. The first passenger train ran in September 1847. The project was besieged with problems mainly with the leather sealing valve, which after 12 months use needed replacing at a cost of £25,000. South Devon Railway directors abandoned the project in favour of conventional trains, the last atmospheric train running in September 1848.

The line is noted as one of the most memorable stretches of track in Britain for its natural beauty, although at a very high cost to Network Rail as it is one of the most expensive lines to maintain due to the continual battle with sea erosion.[4][5][6] One particular storm in 1974 washed away much of the down platform in the station.[7]

Dawlish railway station is situated in the town centre next to the beach. It is served by trains to most stations in Devon, and to London and further afield.

The A379 road runs through the town parallel to the railway line.

During the early and middle part of the 20th Century, Dawlish became famous for Devon Violets perfume, and hundreds of varieties were grown in market gardens surrounding the town. Violet escapees can be found growing wild across the area. Lately the town has become known for growing freesias, daffodils and strawberries. The sheltered location in Lyme Bay means the climate is mild and frost/snow are rare, ensuring a long growing season.

There are several schools in Dawlish. Gatehouse Primary School is one of them Westcliff Primary is another, Ratcliff School and Oaklands Park School and Oakwood Court College.