Lil Dagover was born Marie Antonia Siegelinde Martha Seubert in Madiun, Java, Dutch East Indies (now Indonesia) to Dutch parents. Her father was a forest ranger in the service of the Dutch colonial authorities.[2] In 1897, at the age of ten, Seubert's parents sent her back to Europe to continue her education in boarding schools in Baden-Baden, Weimar and Geneva, Switzerland.[2] Orphaned at the age of 13, she spent the rest of her adolescence with friends and relatives.[3]

After completing her education she began pursuing an extensive career as a stage actress around the principal cities of Europe. In 1917 she married actor Fritz Daghofer, who was twenty-five years her senior. The couple would divorce in 1919 although the union produced a daughter, Eva Marie, born the year of the divorce. Seubert would begin using a variant of her ex-husband's surname as a professional moniker – changing the spelling of 'Daghofer' to 'Dagover'.[4]

Acting career in the Weimar Republic

Lil Dagover made her screen debut in a 1913 film by director Louis Held. During her brief marriage to Fritz Daghofer, she was introduced to several notable film directors; among them Robert Wiene and Fritz Lang. Lang would cast Dagover in the role of 'O-Take-San' in the 1919 exotic drama Harakiri which would prove to be Dagover's breakout role. Lang would direct Dagover in three more films: 1919's Die Spinnen (English title: Spiders), 1921's Der Müde Tod (English release titles: Destiny and Behind The Wall), and 1922's Dr. Mabuse der Spieler. The following year, she would be directed by Robert Wiene in the German Expressionist horror classic Das Kabinett des Doktor Caligari, from a script by Carl Mayer and Hans Janowitz opposite actors Werner Krauss and Conrad Veidt.[4] In Das Kabinett des Doktor Caligari, Dagover would set the stage for future film roles as an exotic, victimized heroine. 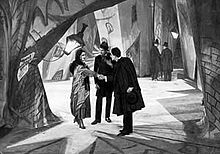 By the early 1920s, Dagover was one of the most popular and recognized film actresses in the Weimar Republic, appearing in motion pictures by such prominent directors as F.W. Murnau, Lothar Mendes and Carl Froelich. In 1925 she made her stage debut under the direction of Max Reinhardt. In the following years she played in Reinhardt’s Deutsches Theater in Berlin and also at the Salzburg Festival.[5] In 1926 she married film producer Georg Witt, who would produce many of Dagover's future films. The couple would remain married until Witt's death in 1972.

Lil Dagover's film career in German cinema through the 1920s was prolific, making over forty films and appearing opposite such actors as Emil Jannings, Nils Olaf Chrisander, Aud Egede-Nissen, Lya De Putti, Bruno Kastner and Xenia Desni. She would also make several films in Sweden for directors Olof Molander and Gustaf Molander and appear in several French silent films – her last film appearance of the 1920s was in the 1929 Henri Fescourt-directed French silent film adaptation of the Alexandre Dumas, père novel The Count of Monte Cristo, opposite Jean Angelo and Marie Glory.

Talkies and the Third Reich

With the advent of talkies, Lil Dagover would cease making foreign films and appear only in German productions; with the exception of one English language American film, Michael Curtiz-directed drama The Woman From Monte Carlo (1932) with actor Walter Huston.

After her return to Germany and the rise of the Third Reich in 1933, she avoided overt political involvement and generally appeared in popular costume musicals and comedies during World War II.[6] However, in 1937, she received the State Actress award,[7] and in 1944 she was awarded the War Merits Cross for entertaining Wehrmacht troops on the Eastern Front in 1943 and 1944 on the German occupied Channel Islands of Jersey and Guernsey.[8]

While Dagover's films of the period were decidedly apolitical, she was known to be one of Adolf Hitler's favorite film actresses and Dagover is known to have been a dinner guest of Hitler on several occasions.[9]

After the defeat of Nazi Germany, Lil Dagover continued to appear in West German films. In 1948, she appeared in the anti-Nazi drama Die Söhne des Herrn Gaspary (English: The Sons of the Lord Gaspary). The film follows the disintegration of a German family living under National Socialism.[8] Dagover's most internationally popular films of the post-WWII era are the 1957 Kurt Hoffmann-directed comedy-drama Bekenntnisse des Hochstaplers Felix Krull (English: The Confessions of Felix Krull) and the 1959 Alfred Weidermann-directed adaptations of the 1901 Thomas Mann novel Buddenbrooks.[7]

In 1962, Lil Dagover was awarded the Bundesfilmpreis. In 1964, she was awarded the Bambi annual television and media award from Hubert Burda Media, and the Cross of Merit by the Federal Republic of Germany in 1967.[7] In 1979, she published her autobiography, Ich war die Dame (English: I Was The Lady). Lil Dagover died at the age of 92, on January 24, 1980, in Munich, Bavaria, Germany, and was buried at the Waldfriedhof Grünwald cemetery, in Munich.[11]