"Any Given Sundance" (a play on the title of the film Any Given Sunday, but otherwise unrelated) is the eighteenth episode of The Simpsons' nineteenth season. It first aired on May 4, 2008.[1] It guest-starred Jim Jarmusch and John C. Reilly as themselves.[2] After Lisa enters a film about her family into the Sundance Film Festival, Homer, Marge, and Bart, and Maggie are appalled by the candid behind-the scenes look at their family. Meanwhile, Principal Skinner and Superintendent Chalmers decide to enter the movie business.[1]

The Simpson family heads to a tailgate party, and while Homer and Bart steal other tailgaters' food, Lisa busies herself by filming the events for a school project, and notices life in its own perspective. Lisa shows the film to her teacher, who reviews her film and says he enjoys it, but says it lacks drama. Principal Skinner reveals he has a secret cinema passion. He forces Lisa to create a film that will include plenty of drama, and Lisa concludes that the only true source of drama is her family. Lisa starts to video her family doing their everyday activities.

Superintendent Chalmers takes notice of Lisa's filmmaking and convinces Skinner to enter Lisa's film in the Sundance Film Festival. The Sundance organizers agree to premiere Lisa's film, as she is an intellectual misfit, and her movie is not a mainstream production. Lisa's movie, Capturing the Simpsons (a play on the title of the Sundance documentary Capturing the Friedmans) is accepted. When the family learns Lisa's film had been accepted, they all go to Park City, Utah, anxious to see the premiere of the film. Skinner and Chalmers try to enter but are turned down. Capturing the Simpsons, produced by "Chalmskinn Productions" begins. Lisa shows her family in all of its dysfunction. Audience members begin making sour remarks about her family. One scene features Bart breaking dishes and Homer walking in with bare feet. Marge cleans up after them and Lisa wishes her a "Happy Birthday," embarrassing the entire family. The film ends, and receives a standing ovation. Homer, Marge, and Bart, and Maggie are all appalled at how the film portrays them and cannot believe Lisa would do such a thing. She tries to explain that the editors might've changed it, until the credits list her as the editor. Comic Book Guy posts a glowing review on his blog, so that the whole world would know about the film. 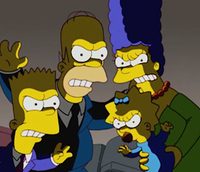 Lisa's family thinks she portrayed them as monsters and literally gets mad at her.[3]

The family is mad at Lisa and begin to ignore her, which makes her want to take back her film. Meanwhile, some distributors find Skinner and Chalmers and want to buy Lisa's movie. Skinner negotiates the terms of the sale, which include access to the most exclusive VIP tent at the fest. The film becomes very popular, but Lisa's family realize others hate them because of the way they were portrayed in the film (with one person of the original audience going as far as to swear Maggie's death), and approach the family and ask them to act the way they did in the film. Lisa feels sorry for what she did to the family, and while deep in thought, Jim Jarmusch approaches her and says he can relate because his movies are also about "social misfits experiencing the dark side of the American dream". Lisa however, feels that she may have, deep inside, humiliated her family on purpose. He tells her the answer to her question of whether or not her family will forgive her is in a film: Life Blows Chunks, a documentary by Nelson Muntz, produced by Chalmskinn Productions. It shows Nelson's struggling life, where Mrs. Muntz is a thief and drinks heavily. When his film ends, Lisa learns that although her family may embarrass her, humiliate her, or infuriate her, there are other families with tougher problems. She apologizes to her family, and they gratefully accept her back. Nelson and Mrs. Muntz, who are now in the spotlight, enjoy the attention.[1][3]

In the end, we see Skinner and Chalmers with John C. Reilly, who is trying to audition for Chalmskinn's next movie, Ghost Willie, but they reject him.

Richard Keller of TV Squad called "Any Given Sundance" a "so-so episode"[4] and said "it just had the feeling of one of those installments where you look up and the show is over.[3] And, the bad thing is you really don't remember what happened".[4] His favorite part of the episode was Nelson's documentary which he compared to that of Barney Gumble in "A Star Is Burns".[4] "Any Given Sundance" was watched by 6.18 million people during its first airing on May 4, 2008.[5]