The Drina (Cyrillic: Дрина, pronounced [drǐːna]) is a 346 kilometer long river, which forms most of the border between Bosnia and Herzegovina and Serbia. It is the longest tributary of the Sava River and the longest karst river in the Dinaric Alps which belongs to the Danube river watershed. Its name is derived from the Latin name of the river (Latin: Drinus) which in turn is derived from Greek (Ancient Greek: Dreinos).

The river is not navigable; however, together with the Tara it represents the main kayaking and rafting attraction in Bosnia and Herzegovina and Montenegro, indeed whole Balkans. 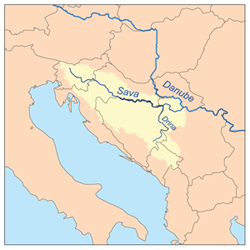 Map showing the Drina within the Sava River watershed.

The Drina originates between the slopes of the Maglić and Pivska planina mountains, between the villages of Šćepan Polje (in Montenegro) and Hum (Bosnia and Herzegovina). At its origin, it flows west, then makes a large curve to the northeast, around the Maluša mountains. Next, it flows through the villages of Kosman, Prijedjel, Dučeli, Čelikovo Polje, Kopilovi, Trbušće, Brod and the town of Foča. It receives the Sutjeska, Bjelava and Bistrica rivers from the left and the Ćehotina at Foča from the right.

Here the Drina carved the longest one of the several gorges on its course, the 45 kilometer (28 mi)-long Suhi Dol-Biserovina gorge between the southernmost slopes of the Jahorina mountains from the north and the Kovač mountains from the south. The villages of Zlatari, Jošanica, Ustikolina, Cvilin, Zebina Šuma, Osanica, Kolovarice, Vranići, Mravinjac, Biljin, Vitkovići and Zupčići are located in the gorge, as well as the town of Goražde. The river receives the Kolunska rijeka and the Osanica as tributaries from the left.

The Drina continues to the northeast, flowing close to the villages of Žuželo, Odžak, Kopači and Ustiprača, entering the 26 km (16 mi) long Međeđa gorge carved between the Vučevica mountains from the south and the southern slopes of the Devetak mountains from the north. The narrowest part of the Međeđa gorge is Tijesno, the 8 kilometer (5 mi)-long section of the gorge where the river is at its narrowest (only 12 meters (39 ft) wide), but also at its deepest (12 m). Here it receives the Prača river from the left and the Janjina and Lim rivers from the right. The villages of Trbosilje, Međeđa and Orahovci are located in the gorge, which is for the most part flooded by the artificial Višegrad lake, created by the Višegrad hydro electric power plant. 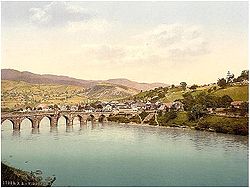 Drina at Višegrad around 1900, Bosnia and Herzegovina

At the town of Višegrad, the Drina receives the Rzav River from the right and turns northwest at the Suva Gora mountain into the Klotijevac gorge. The gorge is 38 kilometers (24 mi) long and up to 1 kilometer (3,200 ft) deep, carved between the mountains of Bokšanica (from the west) and Zvijezda (from the east). The villages of Sase, Resnik, Đurevići and Gornje Štitarevo lie in the gorge and the Kukal river flows into the Drina from the right. At the Slap village, the Drina receives the Žepa river from the right and turns sharply to the west, becoming a border river between Bosnia and Herzegovina and Serbia near the village of Jagoštica.

The Drina flows between the mountains of Zvijezda and Sušica and it is flooded by the artificial Lake Perućac on the northern slopes of the Tara mountain, created by the Bajina Bašta power plant. The villages of Prohići and Osatica (in Bosnia and Herzegovina) are located on the lake, as well as the ruins of the medieval town of Đurđevac. The river is dammed at the village of Perućac, where a strong well springs out from the Tara mountain, flowing into the Drina as a waterfall. In addition, the waters of Drina are used for several fish ponds for the California trout spawning.

The river continues to the villages of Peći, Dobrak, Skelani (in Bosnia and Herzegovina) and Zaguline (in Serbia), reaching the town of Bajina Bašta. At the villages of Donja Crvica and Rogačica, the Drina makes a large turn, completely changing its direction from the northeast to the northwest. This distinct geographical feature forms the Osat and Ludmer regions of Republika Srpska, Bosnia and Herzegovina, which are separated by the river from the Azbukovica part of the Podrinje region of Serbia. 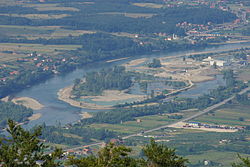 After the dual town of Zvornik (Bosnia and Herzegovina)-Mali Zvornik (Serbia), the Drina flows between the Bosnian mountain of Majevica and the Serbian mountain of Gučevo, and enters the Lower Podrinje region. For the rest of its flow after the village of Kozluk, it has no major settlements on the Bosnian side (except for the town of Janja, which is several kilometers away from the river, and some smaller settlements, like Branjevo and Glavičice). On the Serbian side, the Drina passes next to the villages of Brasina and Rečane, the ruins of the medieval town of Koviljkin grad, the spa and town of Banja Koviljača, the industrial town and center of the Podrinje region, Loznica, and its largest suburb, Lozničko Polje.

The Drina enters the lowest section of its course, the southern Pannonian plain, including the Serbian regions of Jadar (where it receives the Jadar river) and Iverak (where it receives the Lešnica). This is where the rivers spills in many arms and flows, creating the largest flood plain in former Yugoslavia, which the river divides in half. The east side, Mačva, is in Serbia, and the west side, Semberija, in Bosnia and Herzegovina (where it receives the Janja river). The Drina spills over and meanders, forming shallows, islands and sandbars, before emptying into the Sava river between the Serbian village of Crna Bara and the Bosnian Bosanska Rača. The variability of the water flow and low altitude resulted in several course changes during history. The Drina previously flowed into the Sava river near Šabac, 30 kilometers (18 mi) to the east of the present mouth.

The Drina is a very fast river with cold and greenish water, which is from the limestone that underlays the area in which the river carved its bed.

Before it was regulated by the several power stations, the Drina used to flood its valley. The most disastrous flood occurred in 1896, which destroyed the town of Ljubovija.

The Drina originates at an altitude of 432 meters (1,417 ft) and flows into the Sava at 75 meters (246 ft). The large inclination is not constant because of many gorges and bends, but still more than enough to generate an estimated 6 billion kilowatt-hours of potential electrical power.

As a result of the inhospitable terrain and the lack of good railways and major roads, the surrounding territory is sparsely populated. Apart from many small villages, the major settlements on or near the river are:

The Drina is crossed by several bridges: at Višegrad, Skelani, Bratunac and Zvornik (in Bosnia and Herzegovina), and Loznica and Badovinci in Serbia. The most recent bridge is the one at Badovinci, the Pavlovića ćuprija. 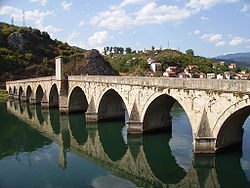 In its lower, meandering course, the Drina is referred to as the kriva Drina ("bent Drina"). This has entered the Bosnian and Serbian languages as a phrase used when someone wants to resolve a complicated situation; it is said that he or she wants to "straighten the bent Drina".

During World War I, from September 8 to September 16, 1914, the Drina was the battlefield of a bloody battle between the Serbian and Austro-Hungarian army, the Battle of Cer. In honor of the battle, the Serbian composer Stanislav Binički (1872–1942) composed the famous March on the Drina, and in 1964 a movie of the same title was shot by director Žika Mitrović. The movie was later banned for a period of time by the Communist government, because of its portrayal of a true-to-life, bloody battle, and its use of Binički's march (banned at that time) as part of the soundtrack. The Slovenian band Laibach did a cover version of the March on the Drina titled Mars on the River Drina in their album NATO, released in 1994 during the Yugoslav Wars.

The largest impact the river has had in culture probably is the novel "Na Drini ćuprija" (The Bridge on the Drina) by the Nobel Prize laureate, Ivo Andrić; the book is about the building of a bridge near Višegrad by the Ottomans in the 16th century