The Bridge on the Drina

The Bridge on the Drina
For the World Heritage Site, see Mehmed Paša Sokolović Bridge.

The Bridge on the Drina (Serbo-Croatian: Na Drini ćuprija, На Дрини ћуприја, [na drǐːni tɕǔprija]), sometimes restyled as The Bridge Over the Drina, is a novel by Yugoslav writer Ivo Andrić. Andrić wrote the novel while living quietly in Belgrade during World War II, publishing it in 1945. Andrić was awarded the Nobel Prize in Literature for his entire literary work and mainly this novel in 1961.

The Bridge on the Drina centres around the town of Višegrad and the Mehmed Paša Sokolović Bridge over the Drina river. The story spans about four centuries during the Ottoman and subsequently Austro-Hungarian administrations of the region and describes the lives, destinies and relations of the local inhabitants, with a particular focus on Muslims and Orthodox Christians living in Bosnia and Herzegovina. 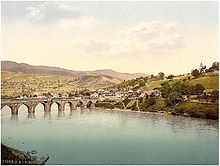 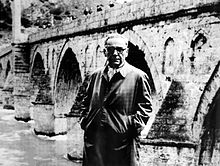 At the beginning of the book Andrić focuses on a small Serbian boy taken from his mother as part of the levy of Christian subjects of the Sultan (devshirme). Andrić describes how the mothers of these children follow their sons wailing, until they reach a river where the children are taken across by ferry and the mothers can no longer follow. That child becomes a Muslim and, taking a Turkish name (Mehmed, later Mehmed pasha Sokolović), is promoted quickly and around the age of 60 becomes Grand Vizier. Yet, that moment of separation still haunts him and he decides to order the building of a bridge at a point on the river where he was parted from his mother.

Already then, even before it has been built, Andrić is portraying the bridge as something with the power not merely to bridge a river but to heal divisions; yet it is quickly to become clear that in this role it is a flawed unifier.

The construction work starts in 1566 and five years later the bridge is completed (together with a caravanserai or han), signifying a very important link between Sarajevo pashaluk (the territory of the present-day Bosnia and Herzegovina) and the rest of the Turkish empire, and replacing the unreliable boat transport across the river. The reader learns how serfs are forced to build it and how they variously strike and sabotage the construction site because of poor working conditions.

The middle of the bridge, called "the kapia"—the gate, is wider, and it quickly becomes a popular meeting place for people from Višegrad and the surrounding area in a relaxed mood which is still typical of present-day Turkey and most of the Balkans. The reader also learns that there are no tensions between the Muslims (referred to as Turks throughout the novel), Christians (the Serbs), Sephardic Jews and the Roma people. Rather, they stand in solidarity with one another during the regular floods of the Drina.

About a century later, Habsburg Austria conquers what is now Hungary and parts of the former Yugoslavia, and thus a crisis within the Turkish empire begins. Due to lack of state funds, the caravanserai is abandoned, while the bridge project is completed, so well-constructed that it stands for centuries without maintenance.

The first nationalist tensions arise in the 19th century when the Serbian uprising in the neighbouring Belgrade pashaluk (now Serbia) begins. Even so, neighbour never raises a hand against neighbour; instead soldiers from all parts of the Empire establish a guard-point at the gate and behead suspicious Serbs and potential rebels.

After the Congress of Berlin, Serbia and Montenegro become fully independent countries while the Austro-Hungarian Empire receives a right to occupy Bosnia and Herzegovina and thus turn it into a protectorate. Since the completion of the bridge, time has seemed to stop, and the local people have many difficulties in accepting the numerous changes that come with Austrian rule. A barrack is built at the site of the caravanserai and the town suddenly experiences a substantial influx of foreigners. People from all parts of the Austro-Hungarian kingdom arrive, opening their businesses and bringing the customs of their native regions with them. A narrow gauge railway line is built to Sarajevo and the significance of the bridge is soon reduced, but not completely, as will become apparent subsequently.

Thanks to this modernisation, children begin to be educated in Sarajevo, and later some of them continue their studies in Vienna. They bring home ideas from the rest of the world and, along with the newspapers that are now available in Višegrad, nationalistic ideas emerge, especially among Serbs. Another "contribution" to these changes is the crisis of the year 1908, when troubles in Turkey give Austria an excellent opportunity to formally annex Bosnia and Herzegovina. During this Annexation Crisis, it becomes evident that Austria sees the Kingdom of Serbia and its royal dynasty, the Karađorđevićs, as a serious obstacle to their further conquest of the Balkans. The Balkan wars of 1912 and 1913, when Turkey was almost completely pushed out of the Balkans, do not help to foster better relations between Serbs and Austrians, as they undermine the significance of the middle span of the bridge, with its friendly inter-ethnic relationships and camaraderie. Many young Serbian men pass over it at night and smuggle themselves across the border to Serbia. The reader never learns if the most famous of them, Gavrilo Princip, passes across this bridge, although historically it would have been a possibility.

In 1914 Gavrilo Princip assassinates Franz Ferdinand in Sarajevo which starts World War I. The Kingdom of Austria and Hungary declare war on Serbia, and the Austrians begin to incite the non-Serbian population of Višegrad against the Serbs living in the town. The bridge with the old road to Sarajevo suddenly regains its importance, as the railway line is not adequate to transport all the materiel and soldiers who will soon invade Serbia. As we learn from the historical account, the Serbian army defeats the Austrians on their first invasion and starts to advance towards Bosnia, so the Austrians decide to establish the front line on the Drina. They evacuate Višegrad and blow up portions of the bridge.