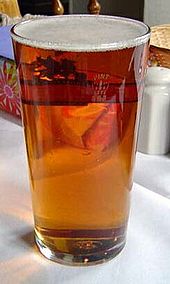 A pint glass is a drinking vessel made to hold either a British ("imperial") pint of 20 imperial fluid ounces (568 mL) or an American pint of 16 U.S. fluid ounces (470 mL). These glasses are used predominantly to serve beer.

The common shapes of pint glass are: 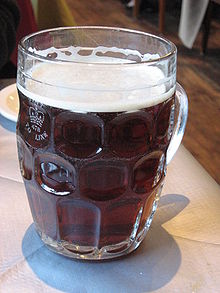 In the United Kingdom, draught beer must be sold in Imperial measure (see Pint#Effects of metrication). United Kingdom law requires certain steps be taken to ensure that a pint of beer is indeed a pint. Though this can be achieved using so-called "metered dispense" (calibrated pumps), the more common solution is to use certified one-pint glasses. Until recently these had a crown stamp and number etched upon them, however EU directives have stated that the glasses instead now, must have PINT with the letters CE etched on them, for synchronisation in the European Union (although the Conservatives have campaigned[4] to have dual markings of crown and CE). The number relates to the authority certifying the capacity of the glass.[5][6] Selling beer in unmeasured glasses without using some other form of calibrated measure is illegal. Half-pint and one-third pint glasses are also available, and are subject to the same laws.

Despite this emphasis on accurately measured glasses, there is a practice of defining a pint of beer and lager as only 95 per cent liquid.[7] It is common for drinkers to be served less than a full 568 ml pint of liquid[8] — either because too much of the glass is taken up by a foamy "head", or simply because the customer has been sold a short measure. This allows publicans to sell more beer than the stated capacity of the cask or keg and hence save money. This practice may have consciously increased since the removal of a duty allowance on ullage (wastage). To counter this the British Beer and Pub Association have issued guidelines for bar staff to respect a customer who asks for a 'top up' to a full 568 ml pint.[9]

For those wishing to avoid this practice while still serving beer with a large head, "lined" or "oversized" glasses are available. These have a line near the top (usually labelled "pint to line") to which the beer should be poured, with the head forming above it. In the past a number of breweries supplied these glasses to their pubs; this is now rarely the case and lined glasses are found mostly at enthusiasts' events such as beer festivals, serious cask ale pubs, and breweries' own bars. The use of lined 568 ml pint glasses in pubs is advocated by the Campaign for Real Ale. In Australia, however, this style of glass is almost universal.

In Canada, imperial pints predominate, however, US pint glasses are used in some establishments.[citation needed]

The Republic of Ireland also uses 570 mL 1 pint glasses, where legal metrology marks are used to show that a glass has passed inspection by the National Standards Authority of Ireland, a state-run body who enforce a number of standard rulings. Starting in 2006, the NSAI "pint" mark, a circle featuring two wavy lines, between which "PINT" is written, with a year mark (last two digits), and a three digit batch code either side; has begun to be phased out with a European standard "PINT"/CE logo stamp. Smaller Pint glasses have been used in pubs and nightclubs though.

Nucleated base of a pint glass.

It is increasingly common to find pint glasses which contain markings on the base; very often these glasses are branded to one particular beer. The markings themselves are formed from small pits which aid in nucleation, allowing the gas within it to more readily release and thus preserve the head. Without the aid of these pits a regular pint glass will keep a head for only 3 or 4 minutes before appearing 'flat'.[11] The markings come in a variety of styles ranging from a simple circular or square hatched pattern to more complicated branding messages.

Pint glass collecting is an increasingly popular way for individuals to commemorate their visits to popular tourist destinations, most notably to microbreweries or sports arenas. These destinations often sell pint glasses adorned with their logos, which are either silkscreened or engraved on the side of the glass, alongside other brewerania, like shot glasses or mugs, for between $2 and $7. Brewery enthusiasts often travel thousands of miles to see where their favorite beer is made or to sample new local and fresh beers. Collectors often display their collections (which sometimes total in the hundreds) in display cases or on shelves.