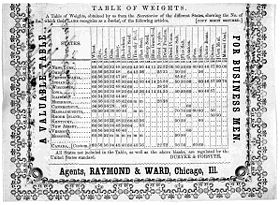 A table of weights from the secretaries of states, showing the number of pounds that their laws recognize as a bushel of different commodities. c. 1854

United States customary units are a system of measurements commonly used in the United States. Many U.S. units are virtually identical to their imperial counterparts, but the U.S. customary system developed from English units used in the British Empire before the system of imperial units was standardized in 1824. Several numerical differences from the imperial system are present.

The vast majority of U.S. customary units have been defined in terms of the metre and the kilogram since the Mendenhall Order of 1893 (and, in practice, for many years before that date).[1] These definitions were refined in 1959.[2]

The U.S. is the only industrialized nation that does not mainly use the metric system in its commercial and standards activities,[3] although the International System of Units (SI, often referred to as "metric") is commonly used in both the US Armed Forces and in fields relating to science, and increasingly in medicine, aviation, government as well as various sectors of industry.

The U.S. system of units is similar to the British imperial system.[4] Both systems derive from the evolution of local units over the centuries, as a result of standardization efforts in the United Kingdom; the local units themselves mostly trace back to Roman and Anglo-Saxon units. Today, these units are defined in terms of SI units.

In the Omnibus Trade and Competitiveness Act of 1988, the United States government designated the metric system of measurement as "the preferred system of weights and measures for U.S. trade and commerce". The legislation states that the federal government has a responsibility to assist industry, especially small business, as it voluntarily converts to the metric system of measurement. This process of legislation and conversion is known as metrication, and in the U.S. is most evident in labeling requirements on food products, where SI units are almost always presented alongside customary units.

However, metrication in the United States has been less forcefully imposed than in other countries,[5] and has encountered more resistance from industrial and consumer market forces, so customary units are still widely used on consumer products and in industrial manufacturing; only in military, medical, and scientific contexts are SI units generally the norm.

The customary system was championed by the United States-based International Institute for Preserving and Perfect­ing Weights and Measures in the late 19th century. Advocates of the customary system saw the French Revolutionary, or metric, system as atheistic.[6] An auxiliary of the Institute in Ohio published a poem reading:

Then down with every "metric" scheme

Taught by the foreign school,

And keep our Father's "rule"!

A perfect inch, a perfect pint,

Shall hold their place upon the earth,

Till time's last trump shall sound![6]

One adherent of the customary system called it "a just weight and a just measure, which alone are acceptable to the Lord."[6]

There are anecdotal objections to the use of metric units in carpentry and the building trades, on the basis that it is easier to remember an integer number of inches plus a fraction than a measurement in millimeters,[7] or that inch measurements are more suitable when distances are frequently divided by two.[5]

Other countries had (or still have, unofficially) customary units of their own, sometimes very similar in name and measure to U.S. customary units, since they often share the same Germanic or Roman origins. Frequently, however, these units designate quite different sizes. For example, the mile ranged by country from one half to five U.S. miles; even foot and pound had varying definitions. Until the twentieth century the customary units of measure in the United States were sometimes just as variable. Historically, a wide range of non-SI units were used in the United States and in Britain, but many have fallen into disuse. This article deals only with the units commonly used or officially defined in the United States.

The system for measuring length in the United States customary system is based on the inch, foot, yard, and mile, which are the only four customary length measurements in everyday use. Since July 1, 1959, these have been defined on the basis of 1 yard = 0.9144 metres except for some applications in surveying.[2] This definition was agreed with the UK and other Commonwealth countries, and so is often termed international measure.

When international measure was introduced in the English-speaking countries, the basic geodetic datum in North America was the North American Datum of 1927 (NAD27), which had been constructed by triangulation based on the definition of the foot in the Mendenhall Order of 1893, that is 1 foot = 1200⁄3937 meters: this definition was retained for data derived from NAD27, but renamed the U.S. survey foot to distinguish it from the international foot.[2] For most applications, the difference between the two definitions is insignificant — one international foot is exactly 0.999998 of a U.S. survey foot, for a difference of about 1⁄8 inch (3 mm) per mile — but it affects the definition of the State Plane Coordinate Systems (SPCSs), which can stretch over hundreds of miles.[9]

The NAD27 was replaced in the 1980s by the North American Datum of 1983 (NAD83), which is defined in meters. The SPCSs were also updated, but the National Geodetic Survey left the decision of which (if any) definition of the foot to use to the individual states. All SPCSs are defined in meters, but seven states also have SPCSs defined in U.S. survey feet and an eighth state in international feet: the other 42 states use only meter-based SPCSs.[9]

State legislation is also important for determining the conversion factor to be used for everyday land surveying and real estate transactions, although the difference (2 ppm) is of no practical significance given the precision of normal surveying measurements over short distances (usually much less than a mile). Twenty-four states have legislated that surveying measures should be based on the U.S. survey foot, eight have legislated that they be made on the basis of the international foot, and eighteen have not specified the conversion factor from metric units.[9]

The most widely used area unit with a name unrelated to any length unit is the acre. The National Institute of Standards and Technology contends that customary area units are defined in terms of the square survey foot, not the square international foot.[8] Conversion factors are based on Astin (July 27, 1968)[10] and National Institute of Standards and Technology (2008).[11]

Units of capacity and volume

The saying "a pint's a pound the world around" refers to 16 US fluid ounces of water weighing approximately (about 4% more than) one pound avoirdupois. An imperial pint of water weighs a pound and a quarter.

There are varying standards for barrel for some specific commodities, including 31 gal for beer, 40 gal for whiskey or kerosene, and 42 gal for petroleum. The general standard for liquids is 31.5 gal or half a hogshead. The common 55 gallon size of drum for storing and transporting various products and wastes is sometimes confused with a barrel, though it is not a standard measure.

In the United States, single servings of beverages are usually measured in fluid ounces. Milk is usually sold in half pints (8 fluid ounces), pints, quarts, half gallons, and gallons. Water volume for sinks, bathtubs, ponds, swimming pools, etc., is usually stated in gallons or cubic feet. Quantities of gases are usually given in cubic feet (at one atmosphere).

Small fruits and vegetables are often sold in dry pints and dry quarts. The U.S. dry gallon is less commonly used, and was not included in the handbook that many states recognize as the authority on measurement law.[13][14] However pecks, or bushels are sometimes used—particularly for grapes, apples and similar fruits in agricultural regions.

There have historically been five different English systems of mass: tower, apothecaries', troy, avoirdupois, and metric. Of these, the avoirdupois weight is the most common system used in the U.S., although Troy weight is still used to weigh precious metals. Apothecaries weight—once used by pharmacies—has been largely replaced by metric measurements. Tower weight fell out of use in England (due to legal prohibition in 1527) centuries ago, and was never used in the United States. The imperial system, which is still used for some measures in the U.K. and commonwealth countries, is based on avoirdupois, with variations from U.S. customary units larger than a pound.

The pound avoirdupois, which forms the basis of the U.S. customary system of mass, is defined as exactly 453.59237 grams by agreement between the U.S., the U.K. and other English-speaking countries in 1959. Other units of mass are defined in terms of it.

Troy weight, avoirdupois weight, and apothecaries' weight are all built from the same basic unit, the grain, which is the same in all three systems. However, while each system has some overlap in the names of their units of measure (all have ounces and pounds), the relationship between the grain and these other units within each system varies. For example, in apothecary and troy weight, the pound and ounce are the same, but are different from the pound and ounce in avoirdupois in terms of their relationships to grains and to each other. The systems also have different units between the grain and ounce (apothecaries' has scruple and dram, troy has pennyweight, and avoirdupois has just dram, sometimes spelled drachm). The dram in avoirdupois weighs just under half of the dram in apothecaries'. The fluid dram unit of volume is based on the weight of 1 dram of water in the apothecaries' system.

To alleviate confusion, it is typical when publishing non-avoirdupois weights to mention the name of the system along with the unit. Precious metals, for example, are often weighed in "troy ounces", because just "ounce" would be more likely to be assumed to mean an ounce avoirdupois.

In the United States, only the ounce, pound and short ton—known in the country simply as the ton—are commonly used, though the hundredweight is still used in agriculture and shipping. The grain is used to describe the mass of propellant and projectiles in small arms ammunition. It was also used to measure medicine and other very small masses.

In agricultural practice, a bushel is a fixed volume of 2150.42 cubic inches. The mass of grain will therefore vary according to density. Some nominal weight examples are:-

In trade terms a bushel is a term used to refer to these nominal weights. Although even this varies. With oats, Canada uses 34 lb bushels and the USA uses 32 lb bushels.

The most common practical cooking measures for both liquid and dry ingredients in the United States (and many other countries) are the teaspoon, tablespoon and cup, along with halves, thirds, quarters and eighths of these. Pounds, ounces, fluid ounces, and common sizes are also used, such as can (presumed size varies depending on product), jar, square (e.g., 1 oz avdp. of chocolate), stick (e.g., 4 oz avdp. butter) or fruit/vegetable (e.g., a half lemon, two medium onions).

Some common volume measures in English-speaking countries are shown at right. The volumetric measures here are for comparison only.

The relationship between the different temperature scales is linear, but the scales have different zero points so that conversion is not simply multiplication by a factor: pure water is defined to freeze at 32 °F = 0 °C and boil at 212 °F = 100 °C at 1 atm; the conversion formula is easily shown to be:

Other names for U.S. customary units

The United States Code refers to these units as "traditional systems of weights and measures".[16]

A pejorative name sometimes used by advocates of metrication is FFU for Fred Flintstone Units.[17]