Nucleation
Not to be confused with Microtubule nucleation .

Nucleation is the extremely localized budding of a distinct thermodynamic phase. Some examples of phases that may form via nucleation in liquids are gaseous bubbles, crystals or glassy regions. Creation of liquid droplets in saturated vapor is also characterized by nucleation (see Cloud condensation nuclei). Nucleation of crystalline, amorphous and even vacancy clusters solid materials is also important, for example to the semiconductor industry. Most nucleation processes are physical, rather than chemical, but a few exceptions do exist (e.g. electrochemical nucleation). A good example would be the famous Diet Coke and Mentos eruption. Nucleation normally occurs at nucleation sites on surfaces contacting the liquid or vapor. Suspended particles or minute bubbles also provide nucleation sites. This is called heterogeneous nucleation. Nucleation without preferential nucleation sites is homogeneous nucleation. Homogeneous nucleation occurs spontaneously and randomly, but it requires superheating or supercooling of the medium. Nucleation is involved in such processes as cloud seeding and in instruments such as the bubble chamber and the cloud chamber. 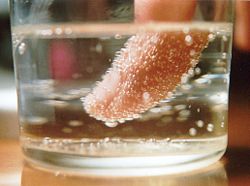 Nucleation of carbon dioxide bubbles around a finger

Nucleation generally occurs with much more difficulty in the interior of a uniform substance, by a process called homogeneous nucleation. The creation of a nucleus implies the formation of an interface at the boundaries of a new phase.

Liquids cooled below the maximum heterogeneous nucleation temperature (melting temperature), but which are above the homogeneous nucleation temperature (pure substance freezing temperature) are said to be supercooled. This is useful for making amorphous solids and other metastable structures, but can delay the progress of industrial chemical processes or produce undesirable effects in the context of casting. Supercooling brings about supersaturation, the driving force for nucleation. Supersaturation occurs when the pressure in the newly formed solid is less than the liquid pressure, and brings about a change in free energy per unit volume, Gv, between the liquid and newly created solid phase. This change in free energy is balanced by the energy gain of creating a new volume, and the energy cost due to creation of a new interface. When the overall change in free energy, ΔG is negative, nucleation is favored.

Some energy is consumed to form an interface, based on the surface energy of each phase. If a hypothetical nucleus is too small (known as an unstable nucleus or "embryo"), the energy that would be released by forming its volume is not enough to create its surface, and nucleation does not proceed. The critical nucleus size can be denoted by its radius, and it is when r=r* (or r critical) that the nucleation proceeds.

It costs free energy to add molecules to this cluster (because

) until the radius reaches, 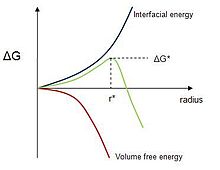 Addition of new molecules to clusters larger than this critical radius releases, rather than costs, available work. In other words at that point growth of the cluster is no longer limited by nucleation, but perhaps by diffusion[4] (i.e. the supply of molecules) or by reaction kinetics instead.

which occurs at the maximum ΔG where dG / dr = 0
The term ΔGv can be related to the equilibrium temperature, enthalpy of fusion (ΔHv), and the degree of undercooling (ΔT) as follows,

By evaluating this equation at the equilibrium point (ΔGV = 0) at the melting temperature Tm we achieve,

Substitution of ΔSv into the first equation leads to,

Which by using common denominators and the definition of ΔT = Tm − T provides,

As the phase transformation becomes more and more favorable, the formation of a given volume of nucleus frees enough energy to form an increasingly large surface, allowing progressively smaller nuclei to become viable. Eventually, thermal activation will provide enough energy to form stable nuclei. These can then grow until thermodynamic equilibrium is restored.

A greater degree of supercooling favors phase transformation, and we can relate ΔG * to supercooling and find r* and ΔG * as a function of ΔT by the substitution of ΔGv,

The greater the supercooling, the smaller the critical radius and the less energy needed to form it. 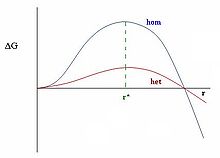 In the case of heterogeneous nucleation, some energy is released by the partial destruction of the previous interface. For example, if a carbon dioxide bubble forms between water and the inside surface of a bottle, the energy inherent in the water-bottle interface is released wherever a layer of gas intervenes, and this energy goes toward the formation of bubble-water and bubble-bottle interfaces. The same effect can cause precipitate particles to form at the grain boundaries of a solid. This can interfere with precipitation strengthening, which relies on homogeneous nucleation to produce a uniform distribution of precipitate particles.

The nucleation rate, I, depends on the average number of critical clusters, n* and the diffusion of molecules to the cluster, β.

where the average population of critical nuclei is

where A is a term that incorporates the shape factor of the atoms and the area to which atoms can join, and the vibrational frequency of the particles. And Q is the activation energy for atomic migration.

This term gives us the diffusion of the atoms to the site of nucleation. However, a problem with the Volmer Weber theory is that it ignores formation of particles of r>r* and assumes that size distribution is maintained (fluctuations are occurring fast)

The rate of nucleation can be expressed as: 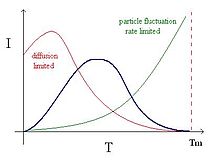 Phase transition processes can also be explained in terms of spinodal decomposition where phase separation is delayed until the system enters the unstable region where a small perturbation in composition leads to a decrease in energy and thus spontaneous growth of the perturbation.[6] This region of a phase diagram is known as the spinodal region and the phase separation process is known as spinodal decomposition and may be governed by the Cahn–Hilliard equation.

Due to the many unjustified assumptions made by the classical nucleation theory (CNT), it has limited applicability to the solution of practical problems when compared with experimental data. The limitations arise mainly because the CNT assumes that macroscopic properties of molecules can be applied to microscopic activities. This can be a major drawback when dealing with characteristics such as density, surface tension, and saturated vapour pressure of clusters consisting of only several tens of molecules. The classical nucleation theory also does not take into consideration the interaction of particles around the nuclei, which leads to thermodynamics.

In the last five decades, due to the ever- increasing accuracy of experimental results, many scientists and engineers have worked to improve and develop more accurate nucleation models. One of the versions of the classical theory which has gained acceptance is the self-consistent theory (SCT) of nucleation.[7] According to this theory,

Under this theory, the nucleation rate becomes

Where I is the rate calculated from the classical nucleation theory. The exponential coefficient in the equation takes into account the surface energy of the monomer.

The coefficient kn reflects the difference between the surface energies of the cluster and the macroscopic liquid droplet and is represented in the first term of the equation. The second and third term takes into account the translational, vibrational and rotational degrees of freedom to the free energy of the droplet. Lastly the fourth term takes into account relaxation of the metastable state. Many scientists believe this equation takes into account all significant contributions to the energy of cluster formation.[8]

Although these modern modifications to the classical nucleation theory improve the applicability of the model, further exploration is still going on to either improve or develop a better model that can be applied to a wider range of conditions.

Nucleation is a topic of wide interest in many scientific studies and technological processes. It is used heavily in the chemical industry for cases such as in the preparation of metallic ultradispersed powders that can serve as catalysts. For example, platinum deposited onto TiO2 nanoparticles catalyses the liberation of hydrogen from water.[9] It is also an important factor in the semiconductor industry as the gap width in semiconductors is influenced by the size of metal nanoclusters.[10]

Koster proposed a method for nucleation of metallic glasses.[12] This method considers the sizes of different crystals and attempts to determine when they were formed using data of their growth rates. It can be used for both homogeneous and heterogeneous nucleation.