Singin' in the Rain (film)

Singin' in the Rain (film) 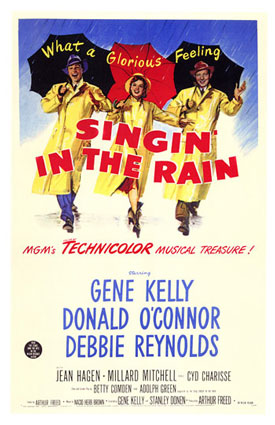 "Singin' in the Rain" is a 1952 starring , , and and directed by Kelly and , with Kelly also providing the . It offers a comic depiction of 's transition from s to "s".

The movie is frequently described as one of the best musicals ever made, [Haley Jr., Jack: "", Frank Sinatra segments. , 1974] topping the list, and ranking fifth in its updated list of the greatest American films in 2007.

Don Lockwood (Gene Kelly) is a popular silent film star with humble roots as a singer, dancer and stunt man. Don barely tolerates his vapid, shallow leading lady, Lina Lamont (), who has convinced herself that the fake romance their studio concocted and publicized is real.

One day, to escape from overenthusiastic fans, Don jumps into a passing car driven by Kathy Selden (Debbie Reynolds). She drops him off, but not before claiming to be a stage actress and sneering at his undignified accomplishments. Later, at a party, the head of Don's studio, R.F. Simpson (), shows a short demonstration of a talking picture, but his guests are unimpressed. Don runs into Kathy again at the party. To his amusement and her embarrassment, he discovers that Kathy is only a chorus girl, part of the entertainment. Furious, she throws a pie at him, only to hit Lina right in the face. Later, Don makes up with Kathy and they begin falling in love.

After a rival studio releases its first talking picture, "The Jazz Singer", and it proves to be a smash hit, R.F. decides he has no choice but to convert the new Lockwood and Lamont film, "The Dueling Cavalier", into a talkie. The production is beset with difficulties (most, if not all, taken from real life), by far the worst being Lina's comically grating voice. A test screening is a disaster. In one scene, for instance, Don repeats "I love you" to Lina over and over, to the audience's derisive laughter (a reference to a scene by John Gilbert in his first talkie

Don's best friend, Cosmo Brown (Donald O'Connor), comes up with the idea to dub Lina's voice with Kathy's and they persuade R.F. to turn "The Dueling Cavalier" into a musical called "The Dancing Cavalier". When Lina finds out that Kathy is dubbing her voice, she is furious and does everything possible to sabotage the romance between Don and Kathy. She becomes even more angry when she discovers that R.F. intends to give Kathy a screen credit and a big publicity buildup. Lina blackmails R.F. into backing down and demands that Kathy continue to provide her singing voice anonymously. As a contract player, Kathy has no choice in the matter.

The premiere of "The Dancing Cavalier" is a tremendous success. When the audience clamors for Lina to sing live, Don, Cosmo and R.F. improvise and get Lina to while Kathy sings into a second microphone while hidden behind thestage's curtain. Later, while Lina is "singing", Don, Cosmo and R.F. gleefully open the stage curtain behind her, revealing the deception &mdash; Lina then flees in embarrassment. When Kathy tries to run away as well, Don stops her and introduces the audience to "the real star of the film".

The movie ends with Don and Kathy kissing in front of a billboard that says "Singin' in the Rain with Don Lockwood and Kathy Selden."

* as Don Lockwood. Although his performance in the song "Singin' in the Rain" is now considered iconic, Kelly was not the first choice for the role — was originally cast. However, Keel was replaced by Kelly as the screenwriters evolved the character from a "Western actor" to a "song-and-dance vaudeville" performer.
* as Kathy Selden. Early on in production, (shortly before her contract termination from MGM), , , , and were among the names thrown around for the role of the "ingenue".
* as Cosmo Brown. The role was based on, and was initially written for, .
* as Lina Lamont. was strongly considered for the role of Lina, until she suggested Hagen, who had been her in the Broadway production of "". Fresh off her role in "", Hagen read for the part for Arthur Freed and did a dead-on impression of Holliday's Billie Dawn character, which won her the role.
* as R.F. Simpson. The initials of the fictional head of Monumental Pictures are a reference to producer Freed. R.F. also uses one of Freed's favorite expressions when he says that he "cannot quite visualize it" and has to see it on film first, referring to the Broadway ballet sequence, a joke, since the audience "has" just seen it.
* as Don's dance partner in the "Broadway Melody" ballet
* as Zelda Zanders, the "Zip Girl" and Lina's informant friend

"Singin' in the Rain" was originally conceived by MGM producer , the head of the "Freed Unit" responsible for turning out MGM's lavish musicals, as a vehicle for his catalog of songs written with for previous MGM musical films of the 1929-1939 period.

In an early draft of the script, the musical number "Singin' in the Rain" was to be sung by Debbie Reynolds, and Gene Kelly on the way back from the flop preview of "The Dueling Cavalier". "You Were Meant For Me" was not included in that draft. Instead, the love song was supposed to be Gene Kelly's version of "All I Do is Dream of You," which would be sung after the party at R.F. Simpson's house, when Kelly chases after Reynolds. The song would have ended up at Kelly's house. The footage of this scene has been lost. Reynolds' solo rendition of "You Are My Lucky Star" (to a billboard showing an image of Lockwood) was cut from the film, but has survived and is included on the DVD version of the film.

In the famous dance routine in which Gene Kelly sings the title song while twirling an umbrella, splashing through puddles and getting soaked to the skin, he was actually dancing in water with a little bit of milk added, so that the water puddles and raindrops would show up in the filming. Kelly was sick with a 103-degree fever at the time. [cite web|title = The Biography Channel| url=http://www.thebiographychannel.co.uk/biography_story/255:304/1/Eugene_Gene_Kelly.htm| accessdate = 2008-06-03 ]

Debbie Reynolds was not a dancer at the time she made "Singin' in the Rain" — her background was as a gymnast.

Donald O'Connor also apparently did not enjoy working with Kelly, finding him to be somewhat of a tyrant on the set, despite being quoted as saying that Kelly was "patient" with him Fact|date=August 2008.

Jean Hagen was nominated for the , and the film for Best Original Music Score.

"Singin' in the Rain" has appeared twice on ""'s list of the ten best films of all time, in and

In 1989, "Singin' in the Rain" was also deemed "culturally, historically or aesthetically significant" by the United States and selected for preservation in the .

The 40th Anniversary Edition VHS version includes a documentary, the original trailer, and Reynolds' solo rendition of "Singin' in the Rain", which was cut from the film.

According to the audio commentary on the Special Edition DVD, the original negative was destroyed in a fire, but despite this, the film has been digitally restored for its DVD release.

* A similar had been used in the "" (aka "Star without Light"), directed by , starring and and later in the "", directed by and starring and .
* "Singin' in the Rain" is sung mockingly by , played by , in the scene in 's film "A Clockwork Orange" (1971). An edited version of Gene Kelly's rendition is heard during the end credits.
*The "Singin' in the Rain" routine has been parodied or imitated numerous times, including by and and . The dance was also parodied, briefly, by during their television episode , where the music for the dance sequence was "Singin' in the Rain". It was also once sung (very badly) by Bill Owen outside 's house in an episode of "". In the 1980 film "Fame", the character Coco Hernandez (played by ) dances in a puddle on a train station while singing "Singin' in the Rain". Canadian figure skater did an on-ice (and water) recreation in a television special. [ [http://www.youtube.com/watch?v=ZNNNGjZm6hQ Youtube.com] ] Actor also performed a version of the dance routine in the 1988 filme Punchline.
*The sequence was also the subject of a advertisement for the new . Kelly appeared to replace his routine with a combination of and body pop dancing styles, culminating when he stopped to look at the aforementioned car. To create this illusion, three breakdancers performed different parts of the routine on a painstakingly recreated replica of the original set. Kelly's face was digitally superimposed upon each dancer in post-production for the close-ups, while prosthetic makeup was sufficient for most of the footage. A of the original song by provided the soundtrack.
* A predominant theme in season four of "" is Spencer's starring role in a shot-for-shot remake of "Singin' in the Rain".
* The popular Bollywood film "" (2007) is, like "Singin' in the Rain", set in a film studio. The sequence for the song 'Main Agar Kahoon' is a clear homage to the sound-stage sequence for 'You Were Meant for Me'.
* The dance to the title song is parodied in the Broadway musical "Spamalot" in the dance break to "Always Look on the Bright Side of Life," complete with tap dancing in raincoats and twirling umbrellas.
* In the Broadway musical "The Full Monty", one of the characters (Ethan) spends the better part of the show unsuccessfully trying to replicate Donald O'Connor's famed "running up the wall thing" from "Make 'Em Laugh."
* An episode of has Quagmire dancing and singing a parody of "Make 'Em Laugh" in an adult movie store, while in another episode, Joe, Quagmire, Cleveland, Peter, and Stewie recreate the song and choreography of "Good Morning."
* 's character in "" does a similar dance, spinning with an umbrella during "".