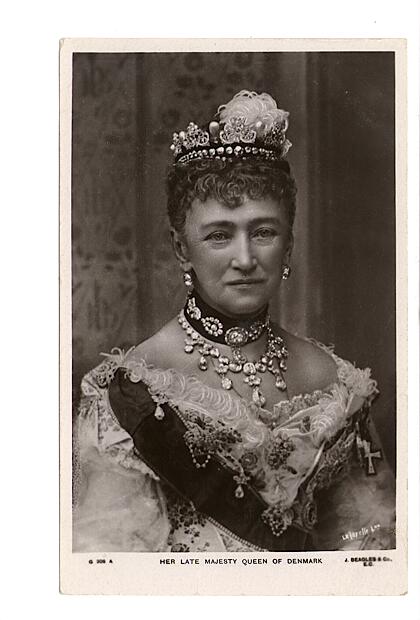 Louise of Hesse was a daughter of ancient German princely family, the Landgraves of Hesse, but lived in Denmark from the age of three and had Danish ancestry, which made her Danish for all practical purposes. In the political and dynastic conflicts during her lifetime she found herself, mainly because of her own hereditary position, in opposition to German nationalism and protective of Danish interests.

She was a niece of King Christian VIII, who ruled Denmark in 1839-48 and was briefly in 1814. As such, she was very close to the succession after several individuals of the Royal House of Denmark who were elderly and childless. As children, her brother Frederik Wilhelm, sisters and she were the king's closest relatives who were likely to produce further generations. It was easy to see that the agnatic succession from King Frederik III of Denmark would probably become extinct within a generation. Louise was one of the females descended from and enjoyed the remainder provisions of the succession (according to the Law), in the event that his male line became extinct.

Royal Marriage to Her Cousin

She married in on , to her second cousin Prince Christian of Schleswig-Holstein-Sonderburg-Glucksburg (who was soon selected as a hereditary prince of Denmark and who later ascended the throne of Denmark as King Christian IX of Denmark).

Through his father, Christian was member of a junior male branch of the (he was a direct male-line descendant of ) and was (albeit a junior) agnatic descendant of (countess of Oldenburg), mother of the first king Christian of Denmark, whose sons were the "Semi-Salic" heiress of her childless brother Count , who died in 1459, the last Schauenburg Duke of Schleswig and . As such, Christian was eligible to succeed in the twin duchies of , but was not first in the line.

Christian was also a great-grandson of King , through his mother , whose mother Luise (Landgravine of Hesse) was King Frederik's third daughter. Christian, orphaned young, grew up in the Danish Royal Household, under the tutelage of his maternal aunt Queen , wife of .

Opportunities opening in the Danish succession

The Crown of Denmark was very much in interests of Louise from her early childhood. At the time of the accession of , 1839, the line of succession and chief cognatic heirs was as follows:

* Crown Prince Frederik, later , only son of the king, born 1808, already once divorced and yet childless. He died 1863.

* Hereditary Prince Frederik , youngest brother of the king, born 1792, married over 10 years and childless. He died also 1863, some months before his nephew the king.

The Crown Prince and the Hereditary Prince were the only surviving agnatic heirs. After them, provisions of the succession order (Lex Regia of 1655) promulgated by Frederik III allowed succession through female line, and the law presumably specified in favor of closest relative of the last monarch.

The female lines following are arranged according to the degree of proximity to the reigning monarch, King Christian VIII:

* king's elder surviving sister, Juliane of Denmark, Dowager Landgravine of Hesse-Philippsthal-Barchfeld, born 1788, widow and childless. She died childless in 1850. Soon after her death, Louise's family arranged the succession line in Louise's favor by renunciations and cedings.

* king's youngest sister, , Landgravine Wilhelm of Hesse, born 1789 (Luise's own mother). She had several children, of whom below.

* King's first , the elder daughter of the late king Frederik VI, , born 1793, wife of Ferdinand of Denmark (see above), married over 10 years and childless. She died 1881, childless.

* King's first cousin once removed, the youngest daughter of the late king Frederik VI, , born 1808, divorced wife of Crown Prince Frederik of Denmark (above), and married to Duke . She was childless, but at the age of 40, was not past child-bearing years, though believed to be barren. In 1840's, it became totally evident that she would never have children. She died 1891, childless.

* King's first cousin, legally the daughter of late King Christian VII and in any case, sister of late King Frederik VI, , Duchess of Augustenborg. born 1771, died 1843. She had several children, of whom below.

All other cognatic heirs were descendants of deceased Princesses of Denmark, themselves members of other dynasties, and rather alien to Denmark. Ancestresses of many of them had renounced their rights when marrying "abroad". Some of closest of those lines:

* , former Crown Prince of Sweden, grandson of late Princess , who was eldest daughter of Frederick V and wife of late King , mother of late King . Queen Carola of Saxony, was his only surviving child and wife of King Albert I of Saxony, but died childless in 1907. , the eldest daughter of Gustav IV Adolf. She was born Princess of Sweden and married and had produced children. Prince Gustav and Sophia and their issue were followed by their sister Grand Duchess Cecilia of Oldenburg.

* , 1777-1847, son of Princess Caroline of Denmark, second daughter of Frederick V. He had numerous children and siblings.

* , born 1771 in Gottorp, eldest son of Princess Louise of Denmark, third and youngest daughter of Frederick V. A widower of a morganatic wife, he died without "ebenbuertig" legitimate children 1845.

* Juliane Luise Amalie, Princess of Hesse, born 1773, daughter of Princess Louise of Denmark, third and youngest daughter of Frederick V. She was unmarried and died in 1860.

After them, next cognatic heirs would have been descendants of daughters and younger sons of predecessors of Frederick V.

There were three thriving young families with chief potential to inherit the throne and who had children to continue the line of succession. These three families were, in order of proximity with the reigning monarch, the Hesse, , and then families. Only two of the families (Augustenborg, Hesse) had mothers who were Princesses of Denmark, but descendants bore non-Danish titles. Two of these, however, i.e. Augustenborg and Lyksborg, were agnatic descendants of ancient Kings of Denmark.

The Augustenborg family was the next senior agnatic branch of Schleswig-Holstein and of the Royal House of Oldenburg, immediately after the male line of the then King of Denmark. There was issue of , sister of Frederik VI:

1. Christian (aka , born 1798 in Copenhagen (Christian Carl Frederik August). Had married 1820 Countess Lovisa-Sophie (1797-1867) who was a Danish noblewoman and relative of kings of Denmark, belonging to a bastard branch of House of Oldenburg. Duke Christian, who in 1848 became a rebel, later sold his rights to the Duchy of Schleswig-Holstein to Denmark in aftermath of , but later renounced his rights to the Duchy of Schleswig-Holstein in favor of his son Frederik August. He was the brother-in-law of the King (Christian VIII). And nephew of late Frederik VI. Duke Christian August died 1869. Several children:
* -Sonderburg-Augustenburg, born 1829 in Augustenborg. He was nephew of Caroline Amalie, the incumbent Queen Consort of Denmark, and "nephew-in-law" of the king himself. As well as a great-nephew of Frederick VI. He was to claim in 1863 to succeed King Frederick VII of Denmark as . Died 1880. He became father of one surviving son and a number of daughters.
* (1831-1917), later (1866) married ; daughter of , and settled in England.
* Louise Auguste (1823-1872)
* Caroline Amelie (1826-1901)
* Caroline Christiane Auguste Emilie Henriette Elisabeth (1833-1917)

The was a younger agnatic branch of Schleswig-Holstein and of the Royal House of Oldenburg. There were children of , a granddaughter of Frederick V of Denmark:

2. Frederick (Friedrich), Duke of Schleswig-Holstein-Sonderburg-Glücksburg (Schleswig 1814-Schleswig 1885), then married Princess of Schaumburg-Lippe, later got plenty of descendants. The current descend from him.

There was the issue of , sister of Christian VIII, siblings of Louise herself:

1. an only son Frederik (), who was born 1820 in Kassel. In 1851, he renounced his rights to Denmark in favor of Louise. He later married, twice, and with his second wife Anna of Prussia produced several children, beginning in 1850's. He died 1884. His one son was

2. Marie Louise Charlotte, born 1814 in Copenhagen. Had 1832 married a Prince of Anhalt-Dessau. She died 1895 and left children and grandchildren. She is said to have renounced her rights of Denmark to Louise in 1851 at latest.

4. Auguste Sophie Frederikke Marie Caroline Julie, who was born 1823 in Copenhagen. She later married a Scandinavian nobleman, Baron . She died 1873.

Louise's brother Frederik of Hesse renounced in 1851 his rights to Danish succession in favor of Louise, (as put by Danish historians:) "after lengthy negotiations where their father William took active part". Frederik succeeded in 1875 as the Head of , when the senior branch of Hesse-Kassel went extinct by the death of the former monarch - they assumed the historical name "of Hesse and Brabant". Landgrave Frederik's third son Prince was in 1918 elected as .

As Louise and Christian had married, Louise's mother and brother and elder sister, princes and princesses of , renounced their rights in favor of Louise and her husband. Prince Christian's wife was now the closest female heiress of Christian VIII and then of Frederick VII.

Landgrave Frederick, a Danish military officer, had been one (and perhaps the foremost) of candidates of Christian VIII of Denmark in 1840's to succeed on the Danish throne if the latter's male line dies out. Landgrave Frederick was of practically Danish upbringing, having lived all his life in Denmark.

In 1847, Prince Christian was, under the blessing from the great powers of Europe, chosen to be a future successor to the Danish throne by Christian VIII, as Christian VIII did not expect his only surviving son, the future Frederik VII to have any sons. A justification for this choice of heir, was through Christian's wife Louise of Hesse-Kassel. (She was, as a niece of Christian VIII closer heir to the throne than her husband.)

Because of , which also operated differently in Denmark and in Schlesweig-Holstein, the succession after childless Frederick VII was a question very thorny to arrange, and it did not go smoothly, but caused a war ().

Denmark was also under Salic Law, but only among descendants of (who was the first hereditary monarch of Denmark - before him the kingdom was officially elective). Agnatic descendance of Frederick III went extinct when Frederick VII died, and at that point, the succession law promulgated by Frederick III provided a succession. There were however several alternative ways to interpret to whom the crown passes then, since the provision was not entirely clear on whether it be the closest female relative or what and who to inherit. The question was solved by an election and a separate law to confirm the new successor.

Some rights belonged also to the line of Glucksburg, a more junior branch of the royal clan. They were also heirs of Frederick III, through their one ancestress who was daughter of King , and they were a more junior agnatic heirs eligible to succeed in Schleswig- Holstein. There were Christian himself and his brothers, eldest of whom was childless, but the second eldest had produced children, also male children.

Prince Christian had been a foster "grandson" of the sonless royal couple Frederick VI and his queen consort Marie (Marie Sophie Frederikke of Hesse), thus familiar with the royal court and the traditions of the recent monarchs. Their young ward, prince Christian was great-nephew of queen Marie, and descendant of a first cousin of Frederick VI. He was brought up as Danish, having lived in Danish-speaking lands of the royal dynasty, and was not attached to German nationalism. Although these did not mean anything legally, they made him a relatively good candidate from the Danish viewpoint. As junior agnatic descendant, he was eligible to inherit Schleswig-Holstein, but not the first in line. As descendant of Frederick III, he was eligible to succeed in Denmark, but not first in line, however that line was not very clear.

When Frederick died in 1863, Christian took the throne as Christian IX

Louise had six, remarkable and successful children with her husband Christian:

The great dynastical success of the six children, was to a great extent not the accomplishment of Christian IX himself, but due to Louise's dynastic ambitions. Some have compared her dynastic capabilities with the ones of Queen

On her passing in 1898, she was interred in near Copenhagen.

Her nephew Frederick Charles of Hesse, married to a granddaughter of Queen Victoria and of German Emperor Wilhelm I, was elected as in 1918. He never took up the position.

* [http://guide2womenleaders.com/act_of_acceptance_and_assurance.htm How Christian IX received the succession to the throne of Denmark]