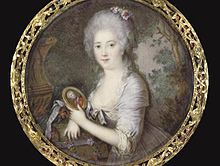 She was the eldest child of Landgrave Charles of Hesse-Kassel and Princess Louise of Denmark. Her paternal grandparents were Frederick II of Hesse-Kassel and Princess Mary of Great Britain. Mary was a daughter of King George II and Caroline of Ansbach. Her maternal grandparents were Frederick V of Denmark and Louise, another daughter of George II of Great Britain and Caroline of Ansbach. Her father was the second son of the Landgrave, the Sovereign Prince of Hesse-Kassel, and as such, had no Principality of his own. Thus he acted in such positions as were offered to cadet members of Royal Houses by their reigning relatives. Denmark was offering more and better positions than the small Hesse-Kassel.

She grew up largely in Denmark, where her father held notable positions, such as the Governorships of provinces. Her mother was the third and youngest daughter of King Frederick V of Denmark and his consort, Louise of Great Britain. As such, she was the niece of King Christian VII and of Prince Regent Frederik, as well as the first cousin of Regent and Crown Prince Frederik, the Danish rulers of that period. 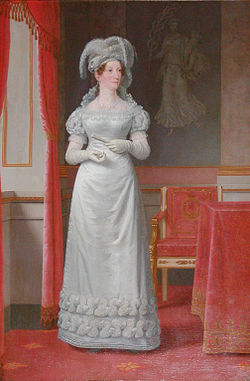 On 31 July 1790 in Gottorp, she married her first cousin, Crown Prince Frederik of Denmark (1768–1839), then Regent of the Realm, the future King Frederick VI of Denmark. Her husband had been Regent since 1784 (when he was just 16 years old), on behalf of his insane father Christian VII of Denmark, who would die in 1808. The Royal Couple assumed the throne upon King Christian's death, having already acted as de facto monarchs for over two decades. In the aftermath of the defeat of Denmark's ally, Emperor Napoleon I of the French, Denmark lost its dominion Norway; the Royal Couple ceased to be Norway's King and Queen in 1814. Queen Marie was Regent of Denmark in 1814–1815 during her husband's absence abroad.

Marie was selected by her cousin as his spouse mainly as a way for him to demonstrate his independence from his Court, who wanted a more political match. The marriage was greated with great enthusiasm by the public, as she was regarded as completely Danish and not as a foreigner, and she was given an enthusiastic welcome when she arrived at Copenhagen. At the Royal Court, she was overshadowed by her husband's sister, who was the real First Lady of the Court. She was pressed by the demand to produce a son, and when her last childbirth resulted in an injury which prevented further intercourse, she was forced to accept her spouse's adultery with Frederikke Dannemand. She managed the affairs of state very well in 1814–15. She was interested in politics and genealogy, and wrote and published Exposé de la situation politique du Danemarc in 1807–14, and in 1822–24 she published the genealogy Supplement-Tafeln zu Joh, which inspired her spouse to take the later Christian IX of Denmark into his family. She protected the charity organisation Det Kvindelige Velgørende Selskab from 1815. As a widow, she withdrew from public life, respected as a symbol of the old dynasty.

They had eight children. However, none of Frederick VI's sons survived infancy and when he died in 1839, he was succeeded by his cousin, Christian VIII of Denmark. The surviving children of King Frederick VI and Queen Marie Sophie Frederikke were their two daughters. Their children were:

Queen Marie Sophie Frederikke lamented the total lack of sons and of grandchildren of her own. When her youngest sister, Duchess Louise Caroline of Lyksborg became a widow when most of her large brood of children were as yet very young, Queen Marie accepted some of the younger ones into her tutelage in the Royal Household. They were much younger than the Queen's own two surviving daughters, and one may speculate that the Queen felt like a grandmother. One such foster child of hers was Prince Christian of Lyksborg, born 1818, the future Christian IX of Denmark.

Christian of Lyksborg and his wife Louise of Hesse named their second daughter, Marie Sophie Frederikke Dagmar of Lyksborg (born 1847), in the Queen's honor as her namesake. After her death (1852), that girl became Tsarina Maria Fedorovna of Russia, preserving there the Queen's first name (Maria/Marie).