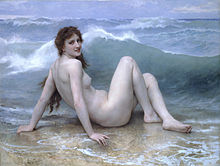 The Wave (La Vague), an 1896 oil painting by William-Adolphe Bouguereau 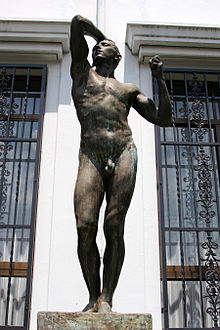 The Age of Bronze (1877) by Rodin, modeled after a Belgian soldier

An art nude is a work of art that takes the naked human form as its dominant subject. The term is used for painting, sculpture, photography, and mixed media.

In the tradition of Western art, nudity was common in the painting and sculpture of classical antiquity.

Many photographers of nude subjects began to use the term figurenude to describe their "art nude" photos, to avoid description of their works as erotica or pornography.

Ruth Bernhard was one of the earliest to describe her photographs as "art nudes". She particularly noted that she never photographed a nude with the subject looking into the lens. During an interview with Donna Conrad, the 95 year old Bernhard compared her nude photographs to those of Jock Sturges, saying: "I never have made a nude where there is a facial expression."[1]