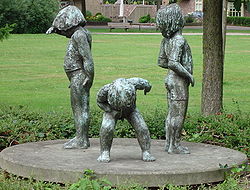 The discovery of the world and of others is acquired in infancy. (Bronze Children and discovery, by Joanika Ring, Overlangel, 1995) 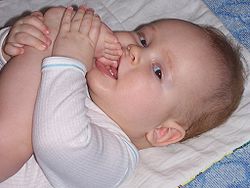 Body image refers to a person's perception of the aesthetics and sexual attractiveness of their own body. The phrase body image was first coined by the Austrian neurologist and psychoanalyst Paul Schilder in his masterpiece The Image and Appearance of the Human Body (1935). Human society has at all times placed great value on beauty of the human body, but a person's perception of their own body may not correspond to society's standards.

The concept of body image is used in numerous disciplines, including psychology, medicine, psychiatry, psychoanalysis, philosophy and cultural and feminist studies. The term is also often used in the media. Across these disciplines and media there is no consensus definition.

A person's body image is thought to be, in part, a product of their personal experiences, personality, and various social and cultural forces. A person's sense of their own physical appearance, usually in relation to others or in relation to some cultural "ideal," can shape their body image. A person's perception of their appearance can be different from how others actually perceive them.

A 2007 report by the American Psychological Association found that a culture-wide sexualization of girls (and women) was contributing to increased female anxiety associated with body image.[1] Similar findings associated with body image were found by an Australian government Senate Standing Committee report on the sexualization of children in the media.[2] However, other scholars have expressed concern that these claims are not based on solid data.[3]

Studies conclude that women are more worried about their body image than men [4] and that their concern can impact on their health.[5] Commentators note that people who have a low body image will try to alter their body in some way, such as by dieting or undergoing cosmetic surgery.

French child psychoanalyst, Francoise Dolto, has developed a theory of the unconscious body image.[6] Negative perceptions by a person regarding their body, such as a perception that they are fat, can in some cases lead to mental disorders such as depression or eating disorders such as bulimia nervosa, though there can be a variety of different reasons why these disorders can occur.

There has recently been a debate within the media industry focusing on the potentially negative impact size zero models can have on young people's body image. It has been suggested that size zero models be banned from cat walks, with many celebrities being targeted by the media due to their often drastic weight loss and slender frames; for example, Nicole Richie and British Super Model Kate Moss. Some examples of celebrity woman Victoria Beckham, regretted in a similar fashion can be found, but the media seem to focus principally on the effect that the Size Zero phenomenon has on young women. Media however, is generally quick to denounce celebrities endorsing fad diets, including popstars who describe girls who are not under a peer pressurized size, a "social suicide".

Men's body image is a topic of increasing interest in both academic articles and in the popular press. Current research indicates many men wish to become more muscular than they currently perceive themselves to be, often desiring up to 26 pounds of additional muscle mass. According to the study, western men desire muscle mass over that of Asian men by as much as 30 pounds.[7] The desire for additional muscle has been linked to many men's concepts about masculinity. A variety of research has indicated a relationship between men's endorsement of traditionally masculine ideas and characteristics, and his desire for additional muscle.[8] Some research has suggested this relationship between muscle and masculinity may begin early in life, as boys' action figures are often depicted as super-muscular, often beyond the actual limits of human physiology.[9][specify]

Studies have found that females tend to think more about their body shape and endorse thinner figures than men even into old age.[10] When female undergraduates were exposed to depictions of thin women their body satisfaction decreased, but rose when exposed to larger models.[11][12]

Body image is often measured by asking the subject to rate their current and ideal body shape using a series of depictions. The difference between these two values is the measure of body dissatisfaction.

Monteath and McCabe found that 44% of women express negative feelings about both individual body parts and their bodies as a whole.[14] Psychology Today found that 56% of the women and about 40% of the men who responded to their survey in 1997 were dissatisfied with their overall appearance.[15]

These figures do not, however, distinguish between people at a low or healthy weight and those who are in fact overweight, i.e., between those whose self-perception as overweight is incorrect and those whose perception of overweight is correct. Post-1997 studies[17] indicate that around 64% of American adults are overweight, such that if the 56%/40% female/male dissatisfaction rates in the Psychology Today study have held steady since its release, those dissatisfaction rates are if anything disproportionately low: Although some individuals continue to believe themselves to be overweight when they are not, those persons are now outnumbered by persons who might be expected to be dissatisfied with their body but are not. In turn, although social pressure to lose weight has adverse effects on some individuals who do not need to lose weight, those adverse effects are outweighed by that social pressure's positive effect on the overall population, without which the recent increases in obesity and associated health and social problems (described in both popular and academic parlance as an "obesity epidemic")[18][19] would be even more severe than they already are.

Some girls and young women compare themselves to models in ads, in terms of their physical attractiveness.[20] Many commentators regard the emphasis in the media and in the fashion industry on thinness and on an ideal female body shape and size as being psychologically detrimental to the well-being of many young women, and on their self-image which also gives rise to excessive dieting and/or exercise, and to eating disorders such as anorexia nervosa. Sociocultural studies highlight the role of cultural factors in the incidence of anorexia nervosa in women, such as the promotion of thinness as the ideal female form in Western industrialized nations, particularly through the media. A recent epidemiological study of 989,871 Swedish residents indicated that gender, ethnicity and socio-economic status were highly correlated with the chance of developing anorexia nervosa, and women with non-European parents were among the least likely to be diagnosed, while women in wealthy, ethnic Swedish families were most at risk.[21]

A study by Garner and Garfinkel demonstrated that those in professions where there is a particular social pressure to be thin (such as models and dancers) were much more likely to develop anorexia during their career,[22] and further research suggests that those with anorexia have much higher contact with cultural sources that promote weight-loss.[23]

Although anorexia nervosa is usually associated with Western cultures, exposure to Western media is thought to have led to an increase in cases in non-Western countries. But other cultures may not display the same worries about becoming fat as those in the West, and instead may emphasise other common features.

However, other researchers have contested the claims of the media effects paradigm. An article by Christopher Ferguson, Benjamin Winegard, and Bo Winegard, for example, argues that peer effects are much more likely to cause body dissatisfaction than media effects, and that media effects have been overemphasized.[3] It also argues that one must be careful about making the leap from arguing that certain environmental conditions might cause body dissatisfaction to the claim that those conditions can cause diagnosable eating disorders, especially severe eating disorders like Anorexia Nervosa.