Bulimia nervosa is an eating disorder characterized by binge eating and purging or consuming a large amount of food in a short amount of time, followed by an attempt to rid oneself of the food consumed, usually by purging (vomiting) and/or by laxative, diuretics or excessive exercise.[1] [2] Bulimia nervosa is nine times more likely to occur in women than men (Barker 2003). Antidepressants, especially SSRIs, are widely used in the treatment of bulimia nervosa. (Newell and Gournay 2000).

The term bulimia comes from Greek βουλιμία (boulīmia; ravenous hunger), a compound of βους (bous), ox + λιμός (līmos), hunger.[3] Bulimia nervosa was named and first described by the British psychiatrist Gerald Russell in 1979.[4][5] Bulimia is strongly familial. Twin studies estimate the heritability of syndromic bulimia to be 54 to 83%. [6][7]

These cycles often involve rapid and out-of-control eating, which may stop when the bulimic is interrupted by another person or the stomach hurts from overextension, followed by self-induced vomiting or other forms of purging. This cycle may be repeated several times a week or, in more serious cases, several times a day,[8] and may directly cause: 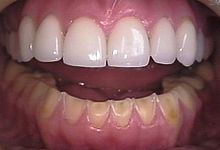 The erosion on the lower teeth was caused by Bulimia; a dentist did NOT drill these teeth. For comparison, the upper teeth were restored with porcelain veneers.[11]

The frequent contact between teeth and gastric acid, in particular, may cause:

As with many psychiatric illnesses, delusions can occur with other signs and symptoms leaving the person with a false belief that is not ordinarily accepted by others.[14]

People with bulimia nervosa may also exercise to a point that excludes other activities [14].

Bulimics are much more likely than non-bulimics to have an affective disorder, such as depression or general anxiety disorder: A 1985 Columbia University study on female bulimics at New York State Psychiatric Institute found 70% had suffered depression some time in their lives (as opposed to 25.8% for adult females in a control sample from the general population), rising to 88% for all affective disorders combined.[15] Another study by the Royal Children's Hospital in Melbourne on a cohort of 2000 adolescents similarly found that those meeting at least two of the DSM-IV criteria for bulimia nervosa or anorexia nervosa had a sixfold increase in risk of anxiety and a doubling of risk for substance dependency.[16] Bulimia also has negative effects on the sufferer's dental health due to the acid passed through the mouth from frequent vomiting causing acid erosion, mainly on the posterior dental surface.

The onset of bulimia nervosa is often during adolescence, between 13 and 20 years of age, and many cases have previously suffered obesity, with many sufferers relapsing in adulthood into episodic binging and purging even after initially successful treatment and remission.[17]

According to Barker, "persons with bulimia are more able to live and interact in everyday chores and tasks such as work and having relationships without the condition overly affecting their abilities".[18]

Bulimia nervosa can be difficult to detect, compared to anorexia nervosa, because bulimics tend to be of average or slightly above or below average weight. Many bulimics may also engage in significantly disordered eating and exercising patterns without meeting the full diagnostic criteria for bulimia nervosa.[19] The diagnostic criteria utilized by the Diagnostic and Statistical Manual of Mental Disorders (DSM-IV TR) published by the American Psychiatric Association includes repetitive episodes of binge eating (a discrete episode of overeating during which the individual feels out of control of consumption) compensated for by excessive or inappropriate measures taken to avoid gaining weight.[20] The diagnosis is made only when the behavior is not a part of the symptom complex of anorexia nervosa and when the behavior reflects an overemphasis on physical mass or appearance.

There are two sub-types of bulimia nervosa:

Some researchers have hypothesized a relationship to mood disorders and clinical trials have been conducted with tricyclic antidepressants,[22] MAO inhibitors, mianserin, fluoxetine,[23] lithium carbonate, nomifensine, trazodone, and bupropion. Research groups who have seen a relationship to seizure disorders have attempted treatment with phenytoin, carbamazepine, and valproic acid. Opiate antagonists naloxone and naltrexone, which block cravings for gambling, have also been used.[24]

There has also been some research characterizing bulimia nervosa as an addiction disorder, and limited clinical use of topiramate, which blocks cravings for opiates, cocaine, alcohol and food.[25] Researchers have also reported positive outcomes when bulimics are treated in an addiction-disorders inpatient unit.[26]

There are several empirically-supported psychosocial treatments for bulimia nervosa. Cognitive behavioral therapy (CBT), which involves teaching clients to challenge automatic thoughts and engage in behavioral experiments (for example, in session eating of "forbidden foods") has demonstrated efficacy both with and without concurrent antidepressant medication. By using CBT patients record how much food they eat and periods of vomiting with the purpose of identifying and avoiding emotional fluctuations that bring on episodes of bulimia on a regular basis (Gelder, Mayou and Geddes 2005). Barker (2003) states that research has found 40-60% of patients using cognitive behaviour therapy to become symptom free. He states in order for the therapy to work, all parties must work together to discuss, record and develop coping strategies. Barker (2003) claims by making people aware of their actions they will think of alternatives.[27][28] Researchers have also reported some positive outcomes for interpersonal psychotherapy and dialectical behavior therapy.[29][30]

Maudsley Family Therapy a.k.a. Family Based Treatment (FBT), developed at the Maudsley Hospital in London for the treatment of anorexia nervosa (AN) has been shown to have positive results for the treatment of bulimia nervosa. FBT has been shown through empirical research to be the most efficacious treatment of AN for patients under the age of eighteen and within three years of onset of illness. The studies to date using FBT to treat BN have been promising.[31]

Some researchers have also claimed positive outcomes in hypnotherapy treatment.[32][33][34] [35] The Twelve-Step model ,used for chemically dependent individuals, was applied to bulimic patients with good results. Researchers at [Ohio State University], in a preliminary study, incorporated the twelve-step model in their treatment of bulimic women in an inpatient unit. They reported positive outcomes. [36]

Media portrayals of an 'ideal' body shape are widely considered to be a contributing factor to bulimia[1] (Barker 2003). A survey of 15–18 year-old high school girls in Nadroga, Fiji found the self-reported incidence of purging rose from 0% in 1995 (a few weeks after the introduction of television in the province) to 11.3% in 1998.[37]

Brain-derived neurotrophic factor (BDNF) is under investigation as a possible mechanism.[38][39]

Through the cognitive and socio-cultural perspectives, indications towards the origin of bulimia nervosa can be established. Fairburn et al’s cognitive behavioral model of bulimia nervosa provides a chief indication of the cause of bulimia through a cognitive perspective, while the “thin ideal” is particularly responsible for the etiology of bulimia nervosa through a socio-cultural context. When attempting to decipher the origin of bulimia nervosa in a cognitive context, Fairburn and et al’s cognitive behavioral model is often considered the golden standard. Fairburn et al’s model discusses the process in which an individual falls into the binge-purge cycle and thus develops bulimia. Fairburn et al argue that extreme concern with weight and shape coupled with low self esteem will result in strict, rigid, and inflexible dietary rules. Accordingly, this would lead to unrealistic restricted eating, which may consequently induce an eventual “slip” where the individual commits a minor infraction of the strict and inflexible dietary rules. Moreover, the cognitive distortion due to dichotomous thinking leads the individual to binge. The binge subsequently should trigger a perceived loss of control, promoting the individual to purge in hope of counteracting the binge. However, Fairburn et al assert the cycle repeats itself, and thus consider the binge-purge cycle to be self-perpetuating.

In contrast, Byrne and Mclean’s findings differed slightly from Fairburn et al’s cognitive behavioral model of bulimia nervosa in that the drive for thinness was the major cause of purging as a way of controlling weight. In turn, Byrne and Mclean argued that this makes the individual vulnerable to binging, indicating that it is not a binge-purge cycle but rather a purge-binge cycle in that purging comes before binging. Similarly, Fairburn et al’s cognitive behavioral model of bulimia nervosa is not necessarily applicable to every individual and is certainly reductionist. Everyone differs from another, and taking such a complex behavior like bulimia and applying the same one theory to everyone would certainly be invalid. In addition, the cognitive behavioral model of bulimia nervosa is very cultural bound in that it may not be necessarily applicable to cultures outside of the Western society. To evaluate, Fairburn et al’s model and more generally the cognitive explanation of bulimia nervosa is more descriptive than explanatory, as it does not necessarily explain how bulimia arises. Furthermore, it is difficult to ascertain cause and effect, because it may be that distorted eating leads to distorted cognition rather than vice versa. [40]

When exploring the etiology of bulimia through a socio-cultural perspective, the “thin ideal internalization” is significantly responsible. The thin ideal internalization is the extent to which individuals adapt to the societal ideals of attractiveness. Individuals first accept and “buy into” the ideals, and then attempt to transform themselves in order to reflect the societal ideals of attractiveness. J. Kevin Thompson and Eric Stice claim that family, peers, and most evidently media reinforce the thin ideal, which may lead to an individual accepting and “buying into” the thin ideal. In turn, Thompson and Stice assert that if the thin ideal is accepted, one could begin to feel uncomfortable with their body shape or size since it may not necessarily reflect the thin ideal set out by society. Thus, people feeling uncomfortable with their bodies may result in suffering from body dissatisfaction, and may develop a certain drive for thinness. Consequently, body dissatisfaction coupled with drive for thinness is thought to promote dieting and negative affects, which could eventually lead to bulimic symptoms such as purging or binging. Binges lead to self-disgust which causes purging to prevent weight gain.[42]

There is little data on the prevalence of bulimia nervosa in-the-large, on general populations. Most studies conducted thus far have been on convenience samples from hospital patients, high school or university students. These have yielded a wide range of results: between 0.1% and 1.4% of males, and between 0.3% and 9.4% of females.[44] Studies on time trends in the prevalence of bulimia nervosa have also yielded inconsistent results.[45] According to Gelder, Mayou and Geddes (2005) bulimia nervosa is prevalent between 1 and 2 per cent of women aged 15–40 years. Bulimia nervosa occurs more frequently in developed countries (Gelder, Mayou and Geddes 2005).

There are higher rates of eating disorders in groups involved in activities which idealize a slim physique, such as dance,[49] gymnastics, modeling, cheerleading, running, acting, rowing and figure skating. Bulimia is more prevalent among Caucasians.[56]