A referendum on changing the Danish Act of Succession, the rules governing the succession to the Danish throne, was held in Denmark, the Faroe Islands, and Greenland on 7 June 2009, simultaneously with the election to the European Parliament, in mainland Denmark .[1]

In 2005, the Crown Princess announced that she was pregnant with her first child. This prompted a debate, as under the then male-preference primogeniture, if the child should turn out to be female, then a hypothetical second male child would pass the first-born in the line of succession, guaranteeing a king before a queen, going against the modern thinking of equal rights.

Under the rules for change of constitution, the law must be passed by two Parliaments, before and after an election, and then approved by a referendum. The law was passed in 2006 with only one abstention (Simon Emil Ammitzbøll, then a member of the Social Liberal Party). The law was passed again by the new Folketing elected in 2007 on 24 February 2009 with two abstentions (of the left-wing Enhedslisten). It was then submitted to a referendum.[3][4][5]

No changes would be made to the constitution and §2 would continue to refer to the Act of Succession of 1953 even though that reference would become invalid. Professor of administrative law at the University of Aarhus Jens Peter Christensen, who is now a member of the Danish Supreme Court[6] has described this as "a mess" and as an "overly clever" way for then-Prime Minister Anders Fogh Rasmussen to signal that the government will oppose any other changes to the constitution. At the same time Christensen emphasizes that he has no doubt, that the procedure is legal.[7]

There was skepticism from the opposition to the proposal, as they preferred a major constitutional reform, modernising the language and content of the 1953 constitution, in which certain rules prevail from 1849. A frequent demand from the left wing is to integrate the Universal Declaration of Human Rights and a number of other basic rights in the constitution. The Conservative-Liberal cabinet of Anders Fogh Rasmussen, however, opposed such changes. The national Danish People's Party are staunch opponents of constitutional change, as they fear socialist stipulations and human rights, e.g. about refugees, will be codified in such a reform. Eventually, all parties in parliament except Enhedslisten supported the change because they would not vote against equal rights. Enhedslisten abstained because they are pro-republic and because the new law still bars royal children born out of wedlock from the throne, and because successors to the throne must have their marriages approved by the monarch and the government. Enhedslisten polemically called this "arranged marriages". 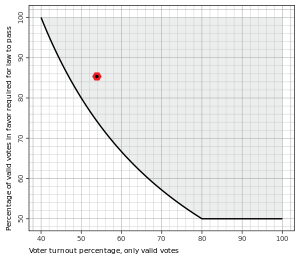 Changes to the act of succession in Denmark follow the same rules as changes to the constitution. First, it must be passed by parliament, then passed in unchanged form by the next parliament following parliamentary elections, and then be submitted to a public referendum. In order for the law to be approved in the referendum, it must get both a majority of votes cast in favour and at least 40% of all eligible voters voting in favour.[4][8]

Despite favourable opinion polling, including a May 2005 poll that showed a majority of 77% in favour of the change,[9] low turnout, such as the 47.6% turnout at the preceding European Parliament elections in 2004, could have doomed the referendum by preventing it from passing the 40% threshold. However, turnout increased and at midnight on the election night with most votes counted, the threshold had been passed, and the law was certain to pass.[10]

In late May, the government launched an official campaign,[11] costing 5 million kroner. It was instantly criticised for being one-sided, undemocratic and patronising. The Prime Minister's Department admitted the official campaign video is an imitation of a sketch from the British comedy show, Harry Enfield's Television Programme.[12] The PR agency responsible for the video, Kunde & Co., declined to comment on whether the copyright issue was sorted out.[citation needed]

The Conservative Youth of Denmark campaigned for a "no" vote, arguing there is no sense in talking about equal rights in a monarchy, and fearing the change would endanger the traditions of the royal house.[citation needed]

Some opposition to the law arose at the end of May. Parts of the Social Liberal Youth, Enhedslisten and republican circles advocated a blank vote, effectively having the same effect as a "no" vote. Others argued for a blank vote because it would improve possibilities for a future in-depth constitutional reform. Some people argued for drawing an extra "Republic" box on the ballot or writing the words "Republic Now!" on it, which would render a spoilt vote.[citation needed]

According to historian Steffen Heiberg in a Ritzau story on 1 June 2009, Queen Margrethe II herself is "rather opposed" to the change.[13] The royal house abstains from commenting on political issues, but according to then Prime Minister Anders Fogh Rasmussen, he had "discussed the matter" with members of the royal house before submitting the proposal in Parliament in 2005.[citation needed]

The number of blank and invalid votes was much higher in big cities, especially Copenhagen. If based on the local results from Copenhagen alone, the change would not have passed.[citation needed]

Prime Minister Lars Løkke Rasmussen stated that the referendum "was important for gender equality" and "a strong signal that shows that we want to be a society where men and women have the same opportunities, whether it is for ordinary people or princes and princesses".[2]