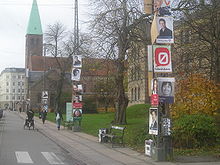 The 66th Folketing election in Denmark was held on 13 November 2007.[1][2] The election allowed prime minister Anders Fogh Rasmussen to continue for a third term in a coalition government consisting of the Liberals and the Conservative People's Party with parliamentary support from the Danish People's Party.[3]

For full results by constituency, see Results of the Danish parliamentary election, 2007.

The Socialist People's Party had the election's largest gain, securing 23 seats in the new parliament compared to 11 in the 2005 elections. The Danish People's Party gained one additional seat, leaving it at 25. The New Alliance secured five seats in its first election, a result lower than projected in earlier opinion polls.

The Conservative People's Party ensured marginal gains, but no additional seats, leaving it at 18 seats. The Christian Democrats did not ensure representation.

Greenland's vote resulted in one seat for Siumut and one for Inuit Ataqatigiit. The Faroe Islands returned Høgni Hoydal representing the Republican Party, its second seat went to the Union Party, a seat gained from the People's Party which did not achieve representation.

The Danish parliament has 179 seats. Four seats are reserved for the Faroe Islands and Greenland, Denmark's overseas territories. Under the Danish system of "negative parliamentarism," the governing cabinet must hold the opposition short of a parliamentary majority, i.e. make certain it never has 90 seats against it.

Prime minister Rasmussen announced that the party composition of cabinet would remain as before, but that parties not in cabinet that support his premiership will have influence over policy. This statement apparently was aimed at the New Alliance. Rasmussen's capacity to accommodate both the New Alliance and the Danish People's Party going forward is not assured – the New Alliance was established, in part, to limit the Danish Peoples's Party's influence. With the DPP in coalition, Rasmussen is able to govern: a New Alliance-supported opposition would be short of a majority by one vote. Edmund Joensen's pledge to abstain on matters related to internal affairs of Denmarkand would alter this, giving the New Alliance the balance of power and risking conflict with the DPP,[4] but Joensen has also pledged that if doing so would risk giving the opposition a majority, he would not abstain, but instead vote with the government.

As after the last election, where Rasmussen also secured continuing power, there were some shuffling of minister posts in the cabinet. The resulting Cabinet of Anders Fogh Rasmussen III was presented a few days after the election.

Central themes in the election

Several topics have been mentioned as central to the election. These include welfare, taxes, immigration, and the health system.[5] The election also clears the Rasmussen government from having a potentially unpopular parliamentary debate on the European Union Treaty of Lisbon[6], as it will become a topic in the election instead.[7]

According to the Constitution of Denmark, Denmark is governed according to the principle of negative parliamentarism, meaning that while a government doesn't need the majority of seats in parliament, it must never have a majority of seats against it in a vote of no confidence. Before the ongoing elections, this was relevant since the government, consisting of the Conservative People's Party and the Liberals did not have a majority of seats, but depended on the support of the Danish People's Party. Early opinion polls showed that neither a right-wing or a left-wing government could gather enough seats to be in government without the support of the newly established New Alliance.[8][9] This caused a lot of interest, since New Alliance had stated that they would first give the government the opportunity to propose a programme for government, but that they would not definitely support a right-wing government prior to seeing how many of their political agendas they could work together on.[10] Many people were unsure how this would be possible, since New Alliance was originally formed to limit the influence of the Danish People's Party, without whom a right-wing government did not seem possible in opinion polls.[11][12][13] After the elections, however, it was clear that New Alliance did not get enough seats in parliament to break the previous right-wing majority.[3]

Shortly after the elections were called, the Social Liberal Party stated that they supported a government led by the Social Democrats.[14] The Red-Green Alliance support a left-wing government almost by default.[15] The Socialist People's Party also support a left-wing government, and have stated that they wish to not only support such a government but to be a part of it.[16] In spite of a dramatic increase in support of the Socialist People's Party in opinion polls, these four parties never stood to get enough seats in parliament to head a government.[8][9] Consequently, prior to the election, Helle Thorning-Schmidt (the leader of the Social Democrats) invited both New Alliance and the Conservative People's Party to participate in a centre-left government, but both parties have refused.[17][18]

Danish prime minister Anders Fogh Rasmussen announced this election date on 24 October 2007. The election was held ahead of time in the sense that by law, the election needed to be held before 8 February 2009, four years after the previous election.

Anders Fogh Rasmussen explained that the elections were called early in order to allow the parliament to work on important upcoming topics without being distracted by a future election. Referring specifically to welfare reform, he said rival parties would then try to outdo each other with expensive reforms which would damage the Danish economy.[2]

Parties that had previously declared their intention to run

The Centre Democrats lacked about 2,000 - 3,000 of the required 20,000 signatures in order to run in the 2007 election when Anders Fogh Rasmussen called it on 24 October, meaning that they won't be able to run.[19] The Liberalists had reached 5,000 signatures.[20] The Danish Ministry of Welfare has registered more than 70 parties that had not handed in the required number of signatures.[21]