A California domestic partnership is a legal relationship available to same-sex couples, and to certain opposite-sex couples in which at least one party is at least 62 years of age. It affords the couple most but not all of "the same rights, protections, and benefits, and shall be subject to the same responsibilities, obligations, and duties under law..." as married spouses.[1][2]

Although the program enjoys broad support in California,[3] it has been the source of some controversy. Groups opposed to the recognition of same-sex families have challenged the expansion of domestic partnerships in court. Conversely, advocates of same-sex marriage contend that anything less than full marriage rights extended to same-sex partners is analogous to the "separate but equal" racial laws of the Jim Crow era.

California has expanded the scope or modified some of the processes in domestic partnerships in every legislative session since the legislature first created the registry. Consult the California Secretary of State for the most current information.[4]

As of 2007, California affords domestic partnerships most of the same rights and responsibilities as marriages under state law (Cal. Fam. Code §297.5). Among these:

While domestic partners receive most of the benefits of marriage, several differences will remain until January 1, 2012. These differences include, in part:

Many supporters of same-sex marriage also argue that the use of the word marriage itself constitutes a significant social difference,[citation needed] and in the majority opinion of In Re Marriage Cases, the California Supreme Court agreed,[10] suggesting an analogy with a hypothetical that branded interracial marriages "transracial unions".[11]

A 2010 UCLA study published in the journal Health Affairs suggests various inequities (including "Inequities in marriage laws") might have "implications for who bears the burden of health care costs." That study finds that men in same-sex domestic partnerships in California only 42% as likely to receive dependent coverage for their partners as their married peers, and that women in same-sex domestic partnerships in California are only 28% as likely to receive that coverage.[12][13]

A couple that wishes to register must meet the following requirements:[14] 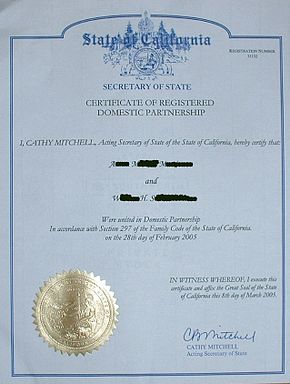 On October 9, 2011, Governor Jerry Brown signed a law that will completely harmonize domestic partnership eligibility requirements with those of marriage, effective January 1, 2012.[15]

Domestic partner registration is an uncomplicated process, more simple and less costly than entering into a marriage. Both parties must sign a declaration listing their names and address.[17] Both signatures must be notarized. The declaration must then be transmitted to the Secretary of State along with a $10 filing fee (plus an additional $23 fee for same-sex couples to help fund LGBT-specific domestic violence training and services).[18] In this regard it is not like a marriage or civil union. Those unions require a ceremony, solemnized by either religious clergy or civil officials, to be deemed valid.[19]

In most cases, a domestic partnership must be dissolved through filing a court action identical[citation needed] to an action for dissolution of marriage. In limited circumstances, however, a filing with the Secretary of State may suffice. This procedure is available when the domestic partnership has not been in force for more than five years. The couple must also meet many other requirements that the dissolution be both simple and uncontested: no children (or current pregnancy) within the relationship, no real estate (including certain leases), and little joint property or debt. The parties must also review materials prepared by the Secretary of State, execute an agreement dividing assets and liability, and waive claims to domestic partner support. Where all the requirements are met, the partnership will terminate six months after the filing, unless either party revokes consent.

Attempts at the Municipal Level

In 1982, the San Francisco Board of Supervisors passed a measure to extend health insurance coverage to domestic partners of public employees (This was due in large part to the early days of the AIDS pandemic.), but did not provide for a registry available to the general public. Mayor Dianne Feinstein vetoed the measure.[20] Eventually San Francisco enacted a similar measure, as did other communities, such as Berkeley, and some local agencies.

In 1985, West Hollywood became the first U.S. city to enact a domestic partnership registry open to the citizenry. Eventually other cities, including San Francisco, Berkeley, and Santa Cruz, followed suit.[21]

Despite successes in a handful of localities, supporters of legal recognition same-sex couples could not overcome the limited geographical scope and relatively modest range of programs administered at the county and city level. In the 1990s, they turned their attention the state legislature.

Early attempts in the state legislature

Mirroring the experience of California’s local efforts, the state legislature did not initially succeed in providing health insurance coverage for domestic partners or creating a domestic partner registry for the general public.

Simultaneously with the Domestic Partnership Act of 1999, Assemblymember Carole Migden introduced Assembly Bill 26 of 1999. As originally drafted, it covered all adult couples, like its unsuccessful senate counterpart. Before bringing the bill to the Assembly floor, however, Migden narrowed its scope. Based on objections from Governor Gray Davis, who did not want a competing alternative to marriage for opposite-sex couples, Migden eliminated coverage for opposite-sex couples where either participant was less than 62 years of age. The bill passed, and Davis signed into law on September 22, 1999. It provided for a public registry, hospital visitation rights, and authorized health insurance coverage for domestic partners of public employees.[26] While modest in scope, Assembly Bill 26 marked the first time a state legislature created a domestic partnership statute without the intervention of the courts. (Hawaii’s legislature enacted a more expansive reciprocal beneficiaries scheme in 1997 in response to an unfavorable lower court ruling; Vermont enacted a sweeping civil union bill in 2000 at the direction of its state Supreme Court.)

In the first successful expansion of the domestic partnership act, Assemblymembers Carole Migden and Robert Hertzberg, joined by state Senator Sheila Kuehl, introduced a bill that added 18 new rights to the domestic partnership scheme. It also relaxed the requirements for opposite-sex couples, requiring only one of the participants to be over 62 years of age. The expanded rights included standing to sue (for emotional distress or wrongful death), stepparent adoption, a variety of conservatorship rights, the right to make health care decisions for an incapacitated partner, certain rights regarding distribution of a deceased partner’s estate, limited taxpayer rights, sick leave to care for partners, and unemployment and disability insurance benefits. Governor Gray Davis signed the bill into law on October 22, 2001.[27]

Since enacting The California Domestic Partner Rights and Responsibilities Act of 2003, the legislature has passed several bills aimed at clarifying how certain spousal provisions should be treated in the context of domestic partnerships and made some modest changes. This subsequent legislation includes:

California public opinion has long supported legal protections for gay and lesbian couples. In early 1997, two and half years before any statewide recognition occurred, polls showed two-thirds of Californians supported the limited provisions in unsuccessful bills debated in the legislature at the time. There was also strong support (59 percent) for broader provisions (pension, health, leave and survivor benefits) that weren’t enacted until more than four years later.[43]

California law provides for referendums, petition drives that would place any legislative enactment on the ballot for review. Following the passage of The California Domestic Partner Rights and Responsibilities Act of 2003, state senator William “Pete” Knight (author of the successful Proposition 22 initiative) and Assemblymember Ray Haynes sought put the new legislation to a popular vote. The referendum failed to qualify for the ballot.[46]

Opponents of legal recognition for same-sex couples filed two lawsuits in the Superior Court of California. In the first case, state senator William “Pete” Knight sued Governor Gray Davis (later substituting Governor Arnold Schwarzenegger) on the grounds that A.B. 205 impermissibly amended Proposition 22, which Knight authored. Randy Thomasson (an opponent of gay rights and head of the Campaign for California Families) filed a similar lawsuit, which challenged both A.B. 205 and the earlier domestic-partner expansion in A.B. 25. Both lawsuits, consolidated into a single action, failed at the trial and appellate courts. In the wake of those decisions, opponents of legal recognition for LGBT families launched at least two recall efforts against Judge Loren McMaster, who presided over the trial-court hearings. The recall efforts also failed.[47]

Along similar legal lines, defendants in a wrongful-death action brought by the survivor of a domestic partnership mounted a defense based partly on the ground that the legislative enactments giving a domestic partner standing to sue for wrongful death ran afoul of Proposition 22 (among other defenses). That defense failed on appeal.[48]

Proponents of same-sex marriage, including the City and County of San Francisco, have challenged the state’s opposite-sex marriage requirements on constitutional grounds. In pursuing these claims, the plaintiffs argue that even the broad protections of California’s domestic partnership scheme constitute a “separate but unequal” discriminatory framework. In May 2008, the Supreme Court of California ruled in their favor in In re Marriage Cases, overruling Proposition 22 and effectively legalizing same-sex marriage in California.

Immediately following the passage of The California Domestic Partner Rights and Responsibilities Act of 2003, a petition drive began to amend the California Constitution to forbid any recognition—including domestic partnerships—of LBGT relationships.[49] The measure failed to qualify for the ballot.

For a month in early 2004, San Francisco issued marriage licenses to same-sex couples. The Supreme Court of California halted that process and later declared the marriages void. Regardless, four separate groups began petition drives to amend the California Constitution to prevent same-sex marriage and repeal domestic-partnership rights.[50] The renewed efforts peaked in 2005,[51] but have continued since. These groups have filed a total of 20 petitions, but none of the proposed amendments has qualified for the ballot.[52]

In 2008, two of these groups moved[53] to qualify ballot initiatives to amend the California Constitution on the November 2008 ballot. One qualified as Proposition 8. The amendment eliminates the right of same-sex couples to marry, but does not repeal any rights granted to domestic partnerships and registration for domestic partnerships remains legal in California.[54] In late 2008, Proposition 8 was passed by the voters, in 2009, the legality of Proposition 8 was upheld by the California Supreme Court in Strauss v. Horton holding that same-sex couples have all the rights of heterosexual couples, except the right to the "designation" of marriage and that such a holding does not violate California's privacy, equal protection, or due process laws.[55] Proposition 8 then was challenged in federal court on August 4th, 2010 in the Perry v. Schwarzenegger trial, as it was found to have violated the Due Process and Equal Protection Clauses of the 14th Amendment of the Federal Constitution.

In late May 2010, the Internal Revenue Service reversed a 2006 ruling, and declared domestic partners in California must be treated the same as heterosexual couples due to a change to the California community property tax law in 2007.[56] The IRS ruled the approximately 58,000 couples who are registered as domestic partners in California must combine their income for federal tax purposes, and then each report half of the total income on their separate tax returns. If one of the partners makes significantly more than the other, the net result is a lower tax obligation for the couple. This ruling may affect other community property states, such as Nevada and Washington.[57]