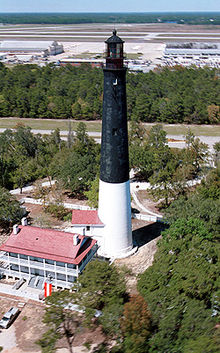 The first lighthouse built by the U.S. on the Florida coast

Naval Air Station Pensacola or NAS Pensacola (IATA: NPA, ICAO: KNPA, FAA LID: NPA), "The Cradle of Naval Aviation", is a United States Navy base located next to Warrington, Florida, a community southwest of the Pensacola city limits. It is best known as the initial primary training base for all Navy, Marine and Coast Guard aviators and Naval Flight Officers, the advanced training base for most Naval Flight Officers, and as the home base for the United States Navy Flight Demonstration Squadron, the precision-flying team known as the Blue Angels. It is currently a Superfund site.[1]

The National Museum of Naval Aviation, the Pensacola Naval Air Station Historic District, and the National Park Service-administered Fort Barrancas and its associated Advance Redoubt are all located at NAS Pensacola, as well as Barrancas National Cemetery.

The site now occupied by NAS Pensacola has a colorful background dating back to the 16th century when Spanish explorer Don Tristan de Luna founded a colony on the bluff where Fort Barrancas is now situated.

Realizing the advantages of the Pensacola harbor and the large timber reserves nearby for shipbuilding, in 1825 President John Quincy Adams and Secretary of the Navy Samuel Southard made arrangements to build a Navy yard on the southern tip of Escambia County, where the air station is today. Navy Captains William Bainbridge, Lewis Warrington, and James Biddle selected the site on Pensacola Bay.

Construction began in April 1826, and the Pensacola Navy Yard, also known as the Warrington Navy Yard became one of the best equipped naval stations in the country. In its early years the base dealt mainly with the suppression of slave trade and piracy in the Gulf and Caribbean as the garrison of the West Indies Squadron.

On January 12, 1861, just prior to the commencement of the Civil War, the Warrington Navy Yard surrendered to secessionists.[2] When Union forces captured New Orleans in 1862, Confederate troops, fearing attack from the west, retreated from the Navy Yard and reduced most of the facilities to rubble.

After the war, the ruins at the yard were cleared away and work was begun to rebuild the base. Many of the present structures on the air station were built during this period, including the stately two- and three-story houses on North Avenue. In 1906, many of these newly rebuilt structures were destroyed by a great hurricane and tidal wave. 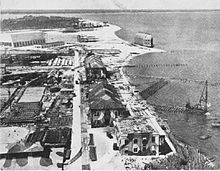 The Navy Department awakened to the possibilities of Naval Aviation through the efforts of Captain Washington Irving Chambers, prevailed upon Congress to include in the Naval Appropriation Act enacted in 1911–12 a provision for aeronautical development. Chambers was ordered to devote all of his time to naval aviation.

In October 1913, Secretary of the Navy Josephus Daniels, appointed a board, with CAPT Chambers as chairman, to make a survey of aeronautical needs and to establish a policy to guide future development. One of the board's most important recommendations was the establishment of an aviation training station in Pensacola.

Upon entry into World War I, Pensacola, still the only naval air station, had 38 naval aviators, 163 enlisted men trained in aviation support, and 54 fixed-wing aircraft. Two years later, by the signing of the armistice in November 1918, the air station, with 438 officers and 5,538 enlisted men, had trained 1,000 naval aviators. At war's end, seaplanes, dirigibles, and free kite balloons were housed in steel and wooden hangars stretching a mile down the air station beach.

In the years following World War I, aviation training slowed down. From the 12-month flight course, an average of 100 pilots were graduating annually. This was before the day of aviation cadets; officers were accepted for the flight training program only after at least two years of sea duty. The majority were Annapolis graduates, although a few reserve officers and enlisted men also graduated. Thus, Naval Air Station Pensacola became known as the "Annapolis of the Air".

Station Field was created on the north side of the navy yard in 1922. Enlarged, it was renamed Chevalier Field in 1935 for Lt. Cdr. Godfrey DeCourcelles Chevalier, a graduate of the U.S. Naval Academy in June 1910, who was appointed a Naval Air Pilot No. 7 on 7 November 1915 and a Naval Aviator No. 7 on 7 November 1918. With the advent of jet aviation, its 3,100 foot runway was too short for new aircraft entering service, and Forrest Sherman Field was opened in 1954 for most fixed-wing operations.

With the inauguration in 1935 of the cadet training program, activity at Pensacola again expanded. When Pensacola's training facilities could no longer accommodate the ever increasing number of cadets accepted by the Navy, two more naval air stations were created—one in Jacksonville, Florida, and the other in Corpus Christi, Texas. In August 1940, a larger auxiliary base, Saufley Field, named for LT R.C. Saufley, Naval Aviator 14, was added to Pensacola's activities. In October 1941, a third field, Ellyson Field, named after CDR Theodore G. “Spuds” Ellyson, the Navy’s first aviator, was added.

Aerial view of NAS Pensacola in the mid-1940s. Chevalier Field is at the upper right.

As the nations of the world moved toward World War II, NAS Pensacola once again became the hub of air training activities. NAS Pensacola expanded again, training 1,100 cadets a month, 11 times the amount trained annually in the 1920s. The growth of NAS Pensacola from 10 tents to the world's greatest naval aviation center was emphasized by then-Senator Owen Brewster's statement: "The growth of naval aviation during World War II is one of the wonders of the modern world." Naval aviators from NAS Pensacola were called upon to train the Doolittle Raiders at Eglin Field in 1942 in carrier take-offs in their B-25 Mitchell bombers. Navy LT Henry Miller supervised their takeoff training and accompanied the crews to the launch. For his efforts, LT Miller is considered an honorary member of the Raider group. [3]

The Korean War presented problems as the military was caught in the midst of transition from propellers to jets, and the air station revised its courses and training techniques. Nonetheless, NAS Pensacola produced 6,000 aviators from 1950 to 1953.

Forrest Sherman Field was opened in 1954 on the western side of NAS Pensacola. This jet airfield was named after the late Admiral Forrest P. Sherman, a former Chief of Naval Operations. Shortly thereafter the United States Navy Flight Demonstration Squadron, the Blue Angels, relocated from NAS Corpus Christi, Texas.

Flypast with troops in formation

Also located on board NAS Pensacola is Naval Aviation Schools Command (NAVAVSCOLSCOM). This command has the following subordinate schools:

In the 2005 round of Base Realignment and Closure (BRAC), it was feared that NAS Pensacola would be closed, despite its naval hub status, due to extensive damage by Hurricane Ivan in late 2004; nearly every building on the installation suffered heavy damage, with near total destruction of the air station's southeastern complex . The main barracks, Chevalier Hall, only opened in late January 2005, four months after the storm. When the list was released on 13 May 2005, it was revealed that NAS Pensacola, as well as the other bases hit by Ivan in Northwest Florida, were off the chopping block.

In May 2006, Navy construction crews unearthed a Spanish ship from underneath the Pensacola Naval Air Station, possibly dating back to the mid-16th century. It was discovered during the rebuilding of the base's rescue swimmer school which was destroyed by Hurricane Ivan. [2]

On March 3, 2010 the commander of the base, Captain William Reavey Jr., was relieved of command after a Navy investigation into alleged improper conduct. Reavey was replaced by Captain Christopher Plummer.[4]

NAS Pensacola is also home to the Detachment 2, 361st Training Squadron (TRS). The 361 TRS home unit is located at Sheppard AFB Tx. This school provides the tech training for all USAF Non Destructive Inspections (NDI) & Aircraft Structural Maintenance (ASM) students. Over 1100 students will graduate and proceed on to their permanent duty locations.