Since its commissioning in December 1942, NS Mayport has grown to become the third largest naval fleet concentration area in the United States. Mayport's operational composition is unique, with a busy harbor capable of accommodating 34 ships and an 8,000-foot (2,400 m) runway capable of handling most any aircraft in the Department of Defense inventory.

Naval Station Mayport is also home to the Navy's United States 4th Fleet, reactivated in 2008 after being deactivated in 1950. 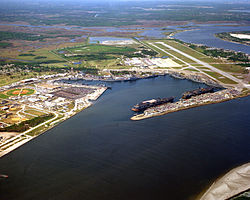 Aerial vew of Naval Station Mayport in 1993 with Saratoga and Constellation.

On January 29, 2010 the Quadrennial Defense Review Report stated that a nuclear aircraft carrier would be homeported at NAS Mayport. The action will help protect the fleet against a potential terror attack, accident or natural disaster, because all east coast aircraft carriers are currently based at Naval Station Norfolk, according to the report. West coast aircraft carriers are split between Naval Station San Diego and Naval Base Kitsap in Washington state. Robert Gates, Secretary of Defense stated, "Having a single (nuclear carrier) homeport has not been considered acceptable on the west coast and should not be considered acceptable on the east coast."[5] The decision was opposed by elected officials in Virginia,[6] who would lose 3,500 sailors and their dependents, $425 million in revenue each year, and most importantly, 6,000 support jobs.[7] The Hampton Roads Chamber of Commerce estimated the loss at 11,000 jobs and $650 million per year.[8] Infrastructure changes and facility construction at Mayport are estimated to take five years and cost over half a billion dollars. The 2011 budget commits $590 million during the fiscal years from 2011–2019, so a carrier may not move to Mayport until 2019.[7]

The Virginia congressional delegation has fought the loss of even one carrier's boost to their economy by citing other areas such as shipbuilding to spend the navy's tight budget.[9] 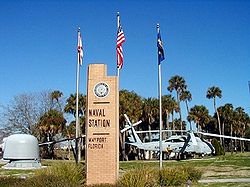