Corona Extra, better known as Corona and labeled as Coronita in Spain,[2] is a brand of pale lager owned and produced by Cerveceria Modelo at a number of breweries in Mexico. It is one of the best-selling beers in Mexico and is one of the top-selling beers worldwide.[3] Corona beer is available in over 170 countries.[4]

In the United States, Canada, New Zealand, Australia and the United Kingdom, Corona is commonly served with a wedge of citrus fruit, usually lime or sometimes lemon, inserted into the neck of the bottle, adding tartness and flavor.

In the United States, Corona Extra is the top selling imported beer.[5][6] 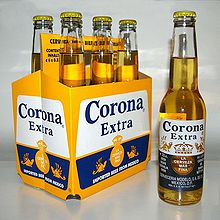 An explanation[citation needed] for the origin of the distinctive 'crown' logo from which Corona takes its name since 1925, says it was based on the crown that adorns the Cathedral of Our Lady of Guadalupe in the town of Puerto Vallarta. This cannot be, as the tower that supports the crown was only erected in 1952, the crown itself being installed at the top in 1963.[8]

Corona is the title sponsor of the LPGA Tour tournament Corona Championship, and the NASCAR Corona Series in Mexico, the most important stock car racing series in the country.

Corona and the ATP have 5½ year sponsorship where Corona will be the ATP's premier world wide sponsor. Corona was also the title sponsor of the SBK Superbike World Championship from 1998 until 2007.

Corona has been seen advertised on London's famous black cabs.[11]