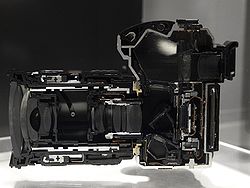 The E-3 has several novel features, including a live preview full articulating screen, autofocus in live view mode, the ability to capture a scene with wide dynamic range using an image processing method called shadow adjustment technology[3] and the ability to control up to three wireless flash groups without external transmitters. The camera is also fully weatherproof even with the popup flash in the "up" position.

The camera, with the new SWD (ultrasonic motor) lenses, is expected to appeal to professional users that want a rugged, portable and lightweight camera body with quality lenses and class leading autofocus.

The camera was reviewed by Digital Photography Review in February 2008 by Simon Joinson.[4]

The E-3 is equipped with a better sensor than other DSLRs marketed by Olympus at the time of its release, allowing the user to operate at higher ISO settings without producing as much noise.

Along with other Olympus 4/3rds bodies, the E-3 has a very 'maintenance free' approach due to it having on-demand pixel mapping, the SSWF 'dust shaker', vignetting and distortion correction either in-camera or during editing with Olympus software. Olympus have also implemented on-demand firmware updates for all their bodies, lens and flash units.