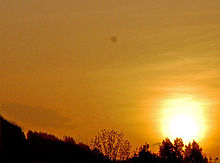 A dust reduction system, or dust removal system, is a technology employed by several manufacturers of digital system cameras (often referred to in English as DSLRs or digital single-lens reflex cameras) to solve the problem of dust particles adhering to the image sensor. Some systems remove or clean the sensor by vibrating at a very high frequency—between 100hertz and 50kilohertz. This is needed because every time lenses are changed there is a chance that dust may enter the camera body and settle on the image sensor. Even if utmost care is taken when changing lenses, the mechanical parts such as shutter or quick-return mirror might still generate dust contamination due to friction occurring during their movement. At the same time, these parts create movement of the air inside the camera body which is enough to whirl the minuscule dust particles around.

Different manufactures employ their own version of dust abatement. Currently there seem to be two main types of dust removal. One type uses a piezo crystal to vibrate a filter which covers the sensor. The second type moves the actual sensor[1]—this may be supplemented by a controlled flow of air.

This shakes or vibrates the thin filter surface that covers the image sensor many tens of thousands of times per second (35,000 to 50,000 hertz). This helps to clean and remove particles from the filter. Olympus devised a such a system, which Leica and Panasonic use it under license, they refer to as a "Supersonic Wave Filter".[2] Canon also uses this type of system.[1] Nikon uses this type of system, the refer the filter as low-pass and the vibration series as high resonance.[3]

This type of systems moves the actual sensor to help reduce dust. It vibrates the actual sensor at around 100 Hz. The amount of movement or sensor travel is larger that the higher frequency filter vibrating types.A crude analogy to compare it to the piezo crystal filter method is something like hitting or banging the sensor to displace the contaminant, whereas the piezo vibrates a filter to make the particles fall off. The sensor may also utilize a negatively charged surface coating to reduce static and help repel negatively charged particles. Konica Minolta is credited with being the original developer of this type of system. Sony and Pentax incorporate sensor shifting in their cameras with Dust Reduction Systems.[1]

Need for use with digital cameras

These problems are not as critical with film SLRs as the dust disappears as the film is wound on, but with DSLRs the image sensor always remains in the same place. Even with dust particles no bigger than 0.1 mm (100 micrometres) and invisible to the human eye, once they land on the image sensor's surface they can degrade the quality of all the images taken thereafter.[4] Furthermore, it is usually a difficult task to remove the dust, often making it necessary to send the camera in for servicing.

(1) Dust particles adhering through electrostatic charges
Most of the contamination to be found on the image sensor surface is caused by dust particles as small as just one micrometre (0.001 mm) adhering to it through electrical charges. The particles themselves carry a positive static electric charge, while the image sensor is negatively charged, which makes them attract each other. The same phenomenon can be observed on the surface of LCD and CRT monitor screens.

Olympus was the first to include a dust reduction system on a DSLR, featuring their Supersonic Wave Filter (SSWF) dust reduction technology on the Olympus E-1 in 2003. All Olympus DSLRs with removable lenses have included this system, as have Panasonic's and Leica's DSLRs; both companies use Olympus technology. Olympus Corporation was awarded an innovation prize by the Japan Institute of Invention and Innovation (JIII) in 2010 for its invention of automatic dust reduction for digital cameras.[5][6]

Before that Sigma was sealing the mirror box of their cameras with a protective filter behind the lens mount, preventing dust from entering the camera body.

Other manufacturers, namely Sony (2006), Canon (2006), Pentax (2006), and Nikon (2007), followed suit with their own dust removal technologies. Each manufacturer uses a somewhat different system.

There have been several attempts by camera magazines to test the various dust reduction systems to see how effective they are. Pixinfo,[1] Chasseur d’Images,[7][8] and Camera Labs[9] have all published their opinions, which can be summarized as saying that none of the systems are completely effective, but that the Olympus SSWF system is significantly better than most of the others, with the Nikon system perhaps a close second.[10]