The Province of Naples is the most densely populated in Italy. At the 2001 census the six most densely populated comuni in Italy (Portici, Casavatore, San Giorgio a Cremano, Melito di Napoli, Naples, and Arzano) were all located in the province, as were 11 of the top 15. It has an area of 1,171.13 km², and as of 2005[update] a total population of 3,092,859. 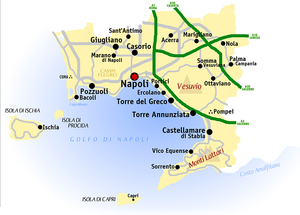 The area is particularly fruitful for tourism, both Italians and foreigners spend vacations in the province. Pompeii, the excavated Roman city which was destroyed by Mount Vesuvius in 79 AD is among the most popular destinations in all of Italy.[2]

Three islands in the Gulf of Naples are also prominent destinations; Ischia, Procida and Capri. On Capri, there is the famous Blue Grotto; inside the grotto the sea seems to be lit from underwater, it is a magnificent blue colour, hence its name[3].

The Sorrentine Peninsula (and its main town Sorrento) has long being a popular destination for tourism, it is well known for the drink Limoncello and its luxurious sea cliffs. It is rich with villas, castles, guard towers, churches, and in Vico Equense ancient farmhouses.[4]

The most popular sport in the province is football, this area was one of the first in Southern Italy to start playing sports, when English sailors brought them in during the early 1900s. The most successful club from the province are by far SSC Napoli, who have won Serie A (the Italian Championship) twice and the UEFA Cup while Diego Maradona was with the club.

At present there are five professional football clubs playing within the Italian leagues from the province; in Serie A there is SSC Napoli, in Serie C1 there is both Juve Stabia and Sorrento, while in Serie C2 the province is represented by SSC Giugliano and Sporting Neapolis.

200px
Province of Naples is represented by the coat of arms on an antique gold ("oro antico") field.[5]