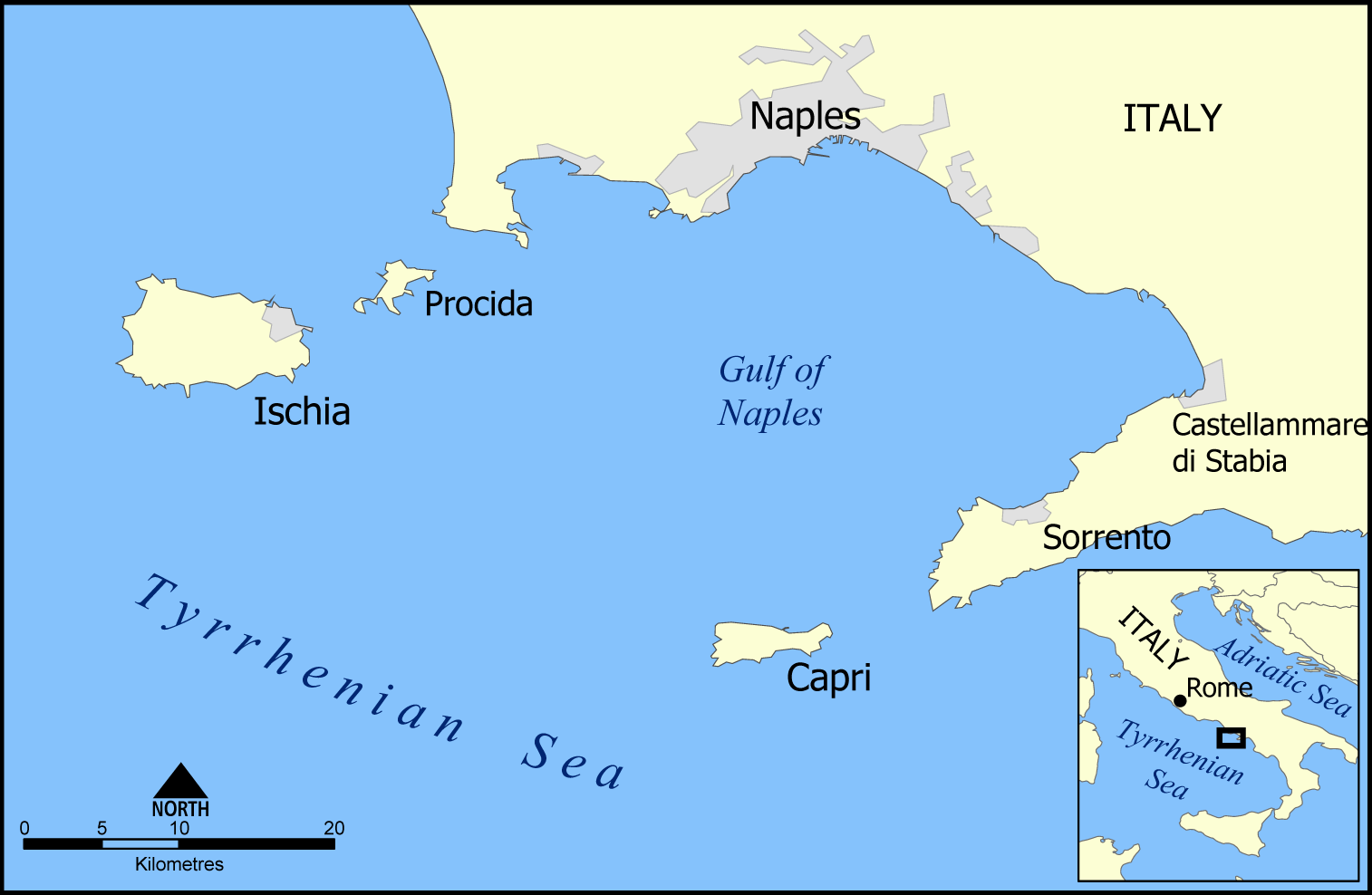 Capri (Italian pronunciation Cápri, usual English pronunciation Caprí) is an Italian island off the , on the south side of the . It has been a resort since the time of the .

Features of the island are the Marina Piccola (Small Harbor), the Belvedere of Tragara, which is a high panoramic promenade lined with villas, the limestone masses called Sea Stacks that stand out of the sea (the "Faraglioni"), Anacapri, the ("Grotta Azzurra"), and the ruins of the Imperial Roman villas.

Capri is in the region of , . The City of Capri is the main centre of population on Capri. It has two adjoining harbours, Marina Piccola and Marina Grande (the main port of the island). The separate commune of is located high on the hills to the west.

The etymology of the name Capri can be traced back to the Greeks, the first recorded colonists to populate the island. This means that "Capri" was probably not derived from the Latin "Capreae" (goats), but rather the Greek "Kapros" (wild boar).

According to the Greek geographer , Capri was once part of the mainland. This has been confirmed by geological surveys and archaeological findings.

The city has been inhabited since very early times. Evidence of human settlement was discovered during the Roman era; according to Suetonius, when the foundations for the villa of were being excavated, giant bones and 'weapons of stone' were discovered. The emperor ordered these to be displayed in the garden of his main residence, the Sea Palace. Modern excavations have shown that human presence on the island can be dated back to the and the .

In his "Aeneid", states that the island had been populated by the Greek people of Teleboi, coming from the . Strabo says that "in ancient times in Capri there were two towns, later reduced to one." ("Geography", 5, 4, 9, 38).
records that there were twelve Imperial villas in Capri (or "Capreae", as it was spelled in ). Ruins of one at Tragara could still be seen in the 19th century.

Augustus's successor built a series of villas at Capri, the most famous of which is the "", one of the best preserved Roman villas in Italy. In 27 CE, Tiberius permanently moved to Capri, running the Empire from there until his death in 37 CE. According to Suetonius, while staying on the island, Tiberius (accompanied by his grand-nephew and heir, ) enjoyed imposing numerous cruelties and sexual perversions upon his slaves.

In 182 CE, Emperor banished his sister to Capri. She was executed shortly afterwards.

After the end of the Western Roman Empire, Capri returned to the status of a dominion of Naples, and suffered various attacks and ravages by pirates. In 866 Emperor Louis II gave the island to . In 987 the first Caprese bishop was consecrated by .

In 1496, established legal and administrative parity between the two settlements of Capri and Anacapri. The pirate raids reached their peak during the reign of Charles V: the famous Turkish admirals Barbarossa Hayreddin Pasha and sacked the island in 1535 and 1553, respectively.

The first famous visitor to the island was the French antiques dealer in the 17th century, who may be considered Capri's first tourist. His diary, found in 1850, is an important information source about Capri.

In January 1806, French troops occupied the island. The British ousted the French troops that May; Capri was turned into a powerful naval base (a "Second "), but the building program caused heavy damage to the archaeological sites. reconquered Capri in 1808, and the French remained there until the end of the Napoleonic era (1815), when Capri was returned to the Bourbon ruling house of Naples.

In the latter half of the 19th century, Capri became a popular resort for European artists, writers and other celebrities. and are among the prominent artists who stayed on the island around the late 1870s. Sargent is best known for his series of portraits featuring the beautiful local model, .

Also in the 19th century, the natural scientist catalogued the and of the island. This work was continued by his son, the author and engineer , who wrote several books on life in Capri in the 20th century.

, , , , , , , and are all reported to have owned a villa there, or to have stayed there for more than three months. Swedish Queen Victoria often stayed there. , the American illustrator and creator of the , owned the Villa Narcissus, formerly owned by the famous Beaux Art painter . also had a villa on the island, though her 1934 song "The Isle of Capri" was written by two Englishmen. owns a villa on the island.

The book that spawned the 19th century fascination with Capri in France, Germany, and England was "Entdeckung der Blauen Grotte auf der Insel Capri", 'Discovery of the Blue Grotto on the Isle of Capri', by the German painter and writer , in which he describes his 1826 stay on Capri and his (re)discovery of the Blue Grotto. Capri is also the setting for "", a short-story by Somerset Maugham. In the story, the protagonist from Boston comes to Capri on a holiday and is so enchanted by the place he gives up his job and decides to spend the rest of his life in leisure at Capri. refers to the island's hills in the title of his impressionistic prélude "Les collines d'Anacapri" (1910).

As well as being a haven for writers and artists, Capri served as a relatively safe place for foreign gay men and lesbians to lead a more open life, and a small nucleus of them were attracted to live there, overlapping to some extent with the creative types mentioned above. The 19th century poet was one of the first. wrote the "" "Et le feu s’èteignit sur le mer" (1910) about Capri and its residents in the early 20th century, causing a minor scandal. Fersen's life on Capri became the subject of 's fictionalised biography, "L'Exile de Capri". One of the island's most famous foreign inhabitants was ; his novel "South Wind" is a thinly fictionalised description of Capri's residents and visitors, and a number of his other works, both books and pamphlets, deal with the island, including "Capri" (1930) and his last work, "A Footnote on Capri" (1952). A satirical presentation of the island's lesbian colony in the 1920s is made in 's novel "Extraordinary Women" (1928).

Novels set on Capri include the eponymous "Kapri" (1939), by the Latvian novelist Jānis Jaunsudrabiņš, who represents the island as a sort of prison for Europeans who have run away from their normal lives and responsibilities, and "I Love Capri" by .

Capri is a tourist destination for both Italians and foreigners. In the 1950s, Capri became a popular destination for the international . The central piazzetta of Capri, though preserving its modest village architecture, is lined with luxury boutiques and expensive restaurants.

During summers, the island is heavily touristed, often by day trippers from Naples and Sorrento.

Capri is served by frequent and service to and Sorrento, as well as many other boat services to the ports of the Gulf of Naples and the Sorrentine Peninsula. Boats call at Marina Grande, from where you can take the up to the village of Capri. A chair lift takes passengers to the top of the island.