Paco, is a district of Manila, Philippines. It is located south of Pasig River, and San Miguel, west of Santa Ana, southwest of Pandacan, north of Malate, northwest of San Andres, and east of Ermita. According to the 2000 census, it has a population of 64,184 people in 13,438 households. [2]

Paco was formerly known as Dilao, because of plants that produce amarillo (yellow) color, were once plentiful on this district.[3] Dilao or dilaw is a Tagalog word for the color yellow. Although, some sources say,[4][5] it was named Dilao or "Yellow Plaza" by the Spanish settlers because of the Japanese migrants who lived there, describing their physiognomy. Spanish Franciscan missionaries founded the town of Paco as early as 1580. [3]

The name Dilao was used until 1791. The name San Fernando was added, making it San Fernando de Dilao. [3] In the 19th century, the town of San Fernando de Dilao was given the nickname of Paco (which means Francisco). Paco, along with Sampaloc, Santa Ana, San Juan del Monte, and San Pedro de Macati became the second largest districts that became part of Manila.[6]It became to known as Paco de Dilao[7] and eventually as Paco as it known today.

Plaza Dilao marker on the foreground, and Takayama's statue on the background.

The Japanese had established quite early an enclave at Dilao, a suburb of Manila, where they numbered between 300 to 400 in 1593. A statue of Takayama can be found there. In 1603, during the Sangley rebellion, they numbered 1,500, and 3,000 in 1606. The Franciscan friar Luis Sotelo was involved in the support of the Dilao enclave between 1600 and 1608.

Dilao, was a settlement of 3000 Japanese during the Spanish era around the year 1600. The term is similar to 'dilaw', the Tagalog term for 'yellow', suggesting the origin in describing their general physiognomy[4]

The Japanese led an abortive rebellion in Dilao against the Spanish in 1606-1607. Their numbers rose again during the interdiction of Christianity by Tokugawa Ieyasu in 1614, when 300 Japanese Christian refugees under Takayama Ukon settled in the Philippines. There are today around 200,000 Japanese people in the Philippines.

A Sikh Temple and Unilever Philippines is located at UN Avenue. There are car shops like Toyota, Ford, Hyundai, Nissan, Honda, and few other car shops. Presently, Dilao is traversed by the President Quirino Avenue. A loop road from President Quirino Avenue is named Plaza Dilao to commemorate the once flourishing Japanese and the Japanese-Filipino communities and districts there in Japantown in Manila. 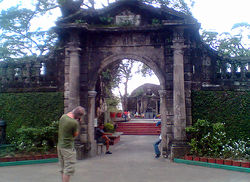 The gates of Paco Park.

Paco Park, was a former municipal cemetery of the old city of Manila, and once contained the remains of Philippine national hero, José Rizal and the GOMBURZA priests. But soon they were transferred to Fort Bonifacio.

The South Luzon Expressway starts in this district and it can go to CALABARZON region.