Gemiliano C. Lopez Jr. (born September 1, 1935) served as Mayor of the City of Manila and was a former assemblyman of the Philippines.

Mel Lopez was born in Manila on September 1, 1935 to Carmen Campos of Bulacan and Lt. Col. Gemiliano Lopez Sr. of Manila. Mel was reared by the examples of his forbearers particularly Col. Honorio Lopez, the Hero of Manila, Philippine Revolutionary, writer [1] and publisher.[2]

Graduated at Jose Rizal University (formerly Jose Rizal College) with a degree in Bachelor of Science in Commercial Science. Also played swimming, boxing and basketball in the NCAA for JRU Heavy Bombers. 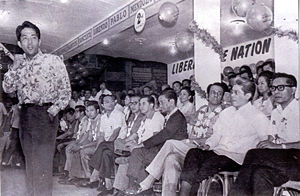 Before the Plaza Miranda Bombings in 1971

A bomb attack marred a Liberal Party rally on August 21, 1971 at the Plaza Miranda, claiming nine lives and injuring 92 persons including Mel who was a young councilor of Manila. Then President Ferdinand Marcos used the bombing incident to suspend the writ of habeas corpus, intensify the militarization of government and, a few weeks later, sign Proclamation 1081, declaring martial law. A new constitution was approved by the constitutional convention, allowing Marcos to rule by decree, including abolishing the local legislative bodies.

On the last session of the Manila City Council, only three councilors – Gonzalo Puyat, Chito Lucero and Mel Lopez—dared to speak against the dictatorship in support of the right of the people to govern themselves through their duly elected representatives.

The martial law government, aimed at “reforming society", was turning out to be not just an authoritarian regime but a totalitarian one as well. It went beyond the confines of the Constitution that limited the declaration of martial law to just dealing with cases of rebellion, insurrection and invasion and imminent danger thereof.

While doing his duties as Councilor, Mel Lopez decided to organize active opposition to the regime that could eventually topple it and help restore democracy to the country. He held secret meetings with labor and student leaders, community and political leaders, exploring ideas on how to organize opposition to the martial law regime.

Mel Lopez was among the founding signatories of Laban, a contraction of “Lakas ng Bayan”, a Tagalog translation of People’s Power. When Marcos announced an election for the Interim Batasang Pambansa on April 7, 1978, Mel Lopez was the campaign manager in Manila, dutifully organizing sorties and meetings to attract more citizens to join the battle against the dictatorship.

In recognition of Lopez’ proven leadership in Manila, some 20 prospective candidates of United Nationalists Democratic Organizations (UNIDO) for the 1984 Batasang Pambansa elections signed a resolution giving him blanket authority to select the five other candidates for the six assembly seats assigned to Manila based on voting population.

The administration ticket suffered a heavy blow and the UNIDO candidates including Mel and four others won in Manila. Never to be outdone, he filed the first bill in the National Assembly, proposing the compensation income of spouses who are both employees to be taxed separately, aimed at paying lower taxes, and other significant bills seeking to abolish the Metro Manila Commission; providing for the establishment of the Philippine National Language Commission; and providing for a synchronization of national and local elections in 1986.

While keeping alive his active opposition to the Marcos regime at the august halls of the Batasang Pambansa, Mel also engaged in sorties in the streets of Manila where he enumerated the sins of the Marcoses, reminded the people of the rights and liberties they have lost during the dictatorship and urged them to fight for democracy. He organized lightning rallies around the city that helped pave the way for EDSA revolution and ultimately led to the ouster of Marcos.

The world-famous EDSA Revolution is a testament to the heroism and courage of Filipinos and their commitment to freedom and democracy. People from all walks of life trooped to EDSA to topple a dictatorship. Filipinos showed to the whole world that through a bloodless revolution, a united Filipino nation has the power to alter the course of history and restore freedom and democracy to the land.[3] 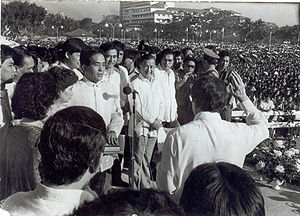 When Lopez took over the reins of Manila’s city hall in 1986, he was faced with great challenges – the urgency of rebuilding and renewing the city’s spirit destroyed by long years of Martial Law. Major achievements were soon felt by Manilans and played up by the vigilant press: a. sound fiscal policy and management; b. effective infrastructure management and development; c. effective social development and management; d. clearing and demolition of squatter areas and illegal structures; e. improvement of the city garbage collection; f. relocation of sidewalk vendors in the main thoroughfares of Manila commercial districts and built/completed markets for relocation purposes; g. enhanced city youth and education program; h. upgraded peace and order/law enforcement program; and i. effective sports promotion and development program.

To Mel, gambling, whether legal or illegal, is a vice that saps the morality and well-being of the family and destabilizes the community because it contributes to crime, social instability and family breakups. Gambling does not contribute positively to the national economy. Lopez closed down the illegal gambling joints, jueteng, that proliferated in the past as well as all kinds of illicit street-level gambling. To convey the message that he was serious in his anti-gambling campaign, he also blocked the re-opening of jai-alai, the “game of the thousand thrills,” despite pressure from powerful groups.

In January 1990, Lopez padlocked two Manila casinos operated by the powerful Philippine Amusement Gaming Corporation (Pagcor), saying the billions gained by Pagcor cannot make up for the pernicious effects gambling inflicts upon the morals of the people, particularly the youth. For such action he was charged with graft in the Sandiganbayan in 1990, the case remaining unresolved for twelve years and finally dropped in June 2002.[4]

The Boys’ Town Haven, a home for the shelterless waifs of Manila, is a heart-warming story of Mel Lopez. The institution for homeless boys was built by past administrations and moved to Parang, Marikina, but it had fallen on hard times and its facilities and buildings had deteriorated because of financial neglect.

Upon assumption as Manila Mayor, Lopez worked for the revival of the institution, renamed “Boys Town” and enlisted the technical and financial support of the private sector—generous and civic-minded businessmen, wealthy Manila residents and even friends from abroad. The facilities were rehabilitated and refurbished to accommodate Manila’s poor and underprivileged children, providing them education, livelihood and career opportunities in life.