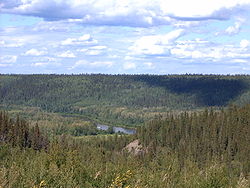 Clearwater River is the name of a river in the Canadian provinces of Saskatchewan and Alberta.

The Clearwater River totals 295 kilometres in length and rises in northwestern Saskatchewan in the northern forest region of the Precambrian Shield. From its headwaters at Broach Lake it flows southeast through Saskatchewan before it turns southwest at Careen Lake. It continues 108 km beyond the Alberta border before it joins the Athabasca River at Fort McMurray. This section of the river in Fort McMurray is also more affectionately referred to as The Chant. From there the Clearwater’s waters reach the Mackenzie River and later the Arctic Ocean. 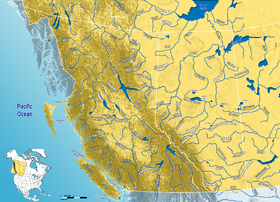 From its headwaters in Broach Lake at 460 m above sea level, the Clearwater drops circa 150 m to its junction with the Athabasca River. The upper part of the river flows over the Precambrian Shield, through rapids, over small waterfalls and through one gorge. More downstream, the river valley enters the Interior Plains and its channels are meandering along sandbars and small islands. The lower Clearwater in Alberta is characterized by high valley walls of limestone and dolomite gorges.

Tributaries of the Clearwater River include Descharme River and McLean River in Saskatchewan and Christina River in Alberta.

Rock-paintings along the upper portion of the river, shapes and symbols on rock surfaces, suggest that this area was already inhabited 5,000 years ago. Before the European colonisation, it was native groups of Beaver, Cree and Chipewyan people who were located here.

During the European exploration and the fur trade of the 18th century, the downstream area of the Clearwater River was an important transportation route between Hudson Bay and Montreal in the east and the District of Athabasca in the west. Farther upstream, the Precambrian upper section was a barrier difficult to overcome by the traders. It was as far back as 1778 that explorer Peter Pond was the first to cross the Methye Portage between Lac La Loche and upper Clearwater River, a 19 km overland link on the route from Churchill to Athabasca. For almost forty years, this was the only overland connection for the fur trade in this area, and continued to be in use for most of the 19th century as well. See Canadian Canoe Routes (early).