The Mattawa River is a river in central Ontario, Canada. It flows east from Trout Lake east of North Bay and enters the Ottawa River at the town of Mattawa. Counting from the head of Trout Lake, it is 76 km in length. The river's name comes from the Algonquin word for "meeting of waterways".

The river follows inside an ancient fault line through the Algoma Highlands called the Mattawa Fault. This fault line marks the northern edge of an ancient rift valley, called the Ottawa-Bonnechere Graben, and still causes minor earthquakes in the area.[1] From Lake Talon to Mattawa the river flows through a rock-walled canyon up to 150 metres (490 ft) in places.

An interesting feature is the Porte de l'Enfer (Hell's Gate). This is a peculiar cave in the river's bank speculated to be a native ochre mine. As far back as 1761, Alexander Henry reported on this cave and the myths surrounding it. It was said to be inhabited by an evil and fierce demon, hence its name.[2]

Potholes on the Talon Portage, several abandoned cataracts and former river channels provide evidence that the Mattawa River was a much larger river at one time. It may have been a post-glacial spillway draining the Great Lakes into the Ottawa River.[1] 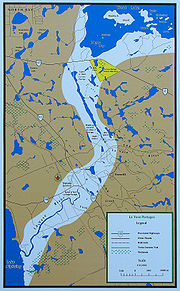 The Mattawa River had been used by native peoples as an important transportation corridor for many centuries. In 1610, Étienne Brûlé [1] and in 1615, Samuel de Champlain were the first Europeans to travel the river.[3] For some 200 years thereafter, it formed part of the important water route leading from Montreal west to Lake Superior. It was the primary access to the vast Canadian interior in the days of the fur trade. Canoes travelling west up the Ottawa turned left at "the Forks" (the mouth of the Mattawa) to enter the "Petite Rivière" ("Small River", as compared to the Ottawa), reaching Lake Nipissing by way of "La Vase Portage", an 11 kilometres (6.8 mi) stretch of water and portages.[4]

Other notable travellers on the Mattawa included Jean Nicolet in 1620, Jean de Brébeuf in 1626, Gabriel Lallemant in 1648, Pierre-Esprit Radisson and Médard des Groseilliers in 1658, La Verendrye in 1731, Alexander MacKenzie in 1794, and David Thompson in 1812.[3]

In the 19th century, the river provided access to large untouched stands of white pine. The river was also used to transport logs to sawmills. The value of the Mattawa River as a transportation link ended in 1881 when the railroad was built to Mattawa.[1]

Almost the full length of the river was protected as a provincial park in 1970 and has been designated as a Canadian Heritage River in January 1988.[5] While logging is still an important industry in this region, its shores are now protected from further development and logging.

Today, the river and lakes are mainly used for recreation.

In 1970, a section of the Mattawa River from the eastern end of Trout Lake to the western boundary of Samuel de Champlain Park was protected. This 33 kilometres (21 mi) long and 122 metres (400 ft) wide ribbon of land on both sides of the river was designated as Ontario's first "waterway" park.[1] It is a non-operating park, meaning there are no visitor facilities and services. There are some backcountry campsites provided and the portage trails are marked with signs and historic plaques. However most are in various stages of neglect.

There are plans to increase the park by 108.8 square kilometres (42.0 sq mi) of Crown Land along both shores, and extending it on the eastern side of Samuel de Champlain Park towards the town of Mattawa. It will include Rice Bay Delta marsh communities, silver maple swamp forests, and the Talon Lake Forest.[6] 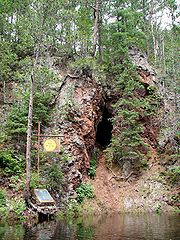 The Mattawa River is a popular destination for weekend canoe camping trips. Because of well established portages, the river can be travelled in both directions. The route description below follows the river's flow from west to east.

Public access is on Trout Lake. Continue east on the river. Some older maps may still show the Tortue Rapids but these were blasted and no longer present. Turtle Lake follows.

From here the river goes north through several sets of small lakes (requiring a lift-over or short portage between each), before looping back and flowing into the north end of Lake Talon. But the historic canoe route bypasses this section by going to Lake Talon through Pine Lake, via Portage de la Mauvaise Musique and Portage Pin de Musique.

At the end of Lake Talon, portage around the dam. After Pimisi Lake, there are a few Class 1 rapids until the Paresseux Falls. Shortly after follows the Porte de l'Enfer (Hell's Gate) on the north bank.

There are two short whitewater sections inside Champlain Park but which become shallow and a rock garden in low water. The last portage before Mattawa and the Ottawa River is around the Hurdman Dam.

The Mattawa River Canoe Race has been held each year since 1976, usually to coincide with the Mattawa Voyageur Days Festival in late July. The race runs the full length of the river from Olmsted Beach in North Bay to Mattawa, some 64 km. This popular race is open to several classes of competition, including solo and tandem canoeing, recreational, and "voyageur".

The record times for the racing classes are:

The Mattawa River just downstream of the Talon Chute.